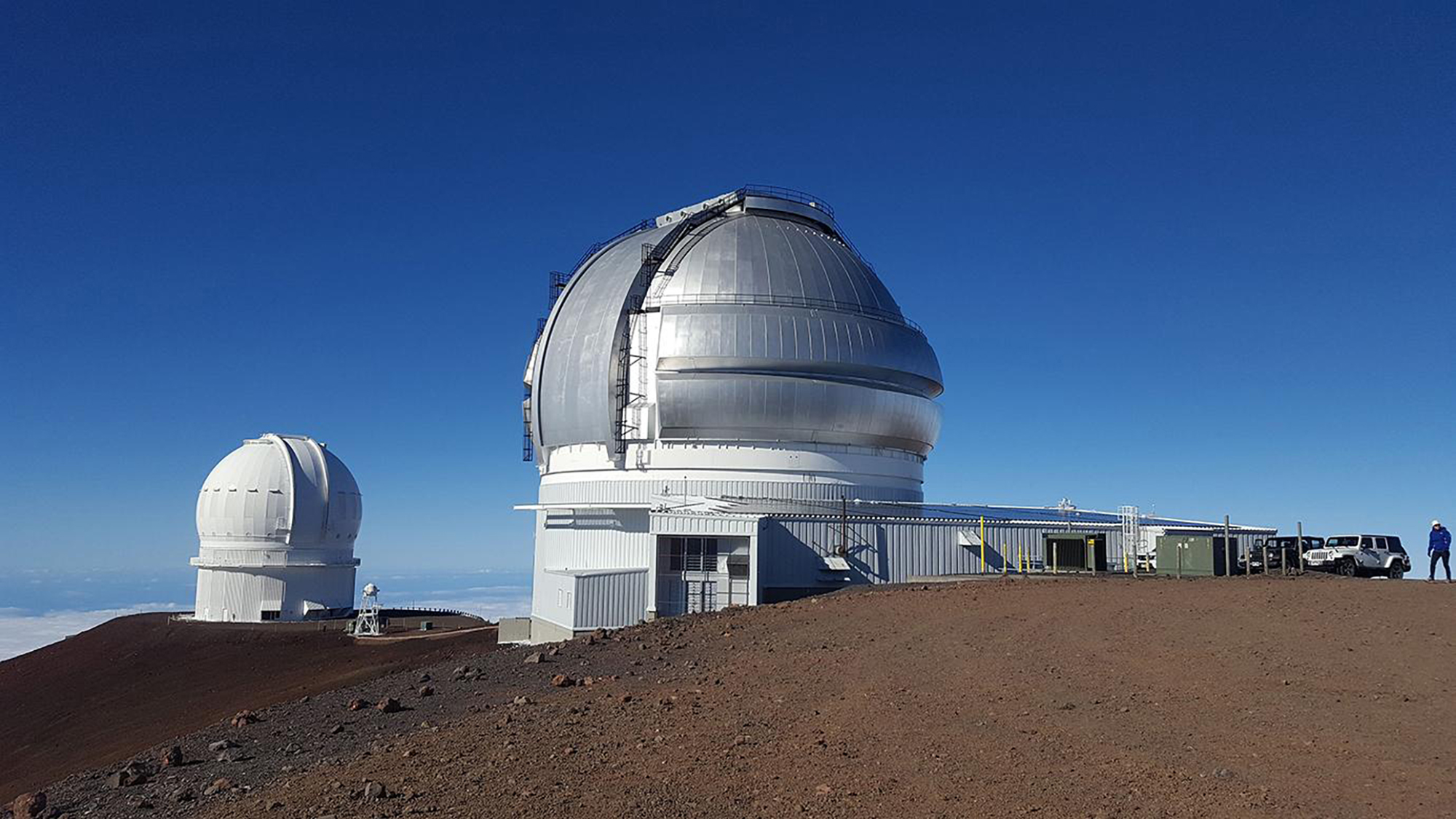 MAROON-X, an instrument that detects the infinitesimal gravitational pull that exoplanets exert on the stars they orbit, was installed in Hawaii’s Gemini Observatory this summer. (Photo courtesy Jacob Bean)

Beyond the milky way

After a decade building the instrument, a team led by astronomy and astrophysics associate professor Jacob Bean installed MAROON-X in Hawaii’s Gemini Observatory to search other solar systems for exoplanets that could potentially host life. From its perch atop the observatory’s Gemini North telescope, the instrument detects the infinitesimal gravitational pull that exoplanets exert on the stars they orbit, enabling scientists to identify the exoplanets and measure their masses. MAROON-X took its first readings on September 23.

Two UChicago arts programs began the 2019–20 academic year with new leadership. Jacqueline Stewart, AM’93, PhD’99, professor of cinema and media studies, was named director of Arts + Public Life, which works to advance the relationships between the University and the civic, cultural, and artistic communities of Chicago’s South Side. Previously director of the Richard and Mary L. Gray Center for Arts and Inquiry, Stewart is succeeded in that position by Seth Brodsky, associate professor of music. The Gray Center supports collaborations between artists and scholars at UChicago.

Tandean Rustandy, MBA’07, founder and chief executive of PT Arwana Citramulia Tbk, has been elected to the University of Chicago Board of Trustees. His five-year term began in May. Rustandy is a member of the Chicago Booth Council and a past member of the Booth Global Advisory Board Asia cabinet. His belief in a socially beneficial approach to business was the driving force behind his decision to support expanded research and programming in social innovation and entrepreneurship through the Rustandy Center for Social Sector Innovation, one of many areas of the University he has supported.

A new framework for doctoral education in the Divinity School, Humanities Division, Social Sciences Division, and School of Social Service Administration will be phased in over two academic years beginning in fall 2020. Under the new approach, announced by Provost Daniel Diermeier in October, all enrolled PhD students will be funded for the duration of their programs at the guaranteed stipend level (currently $31,000) plus full tuition and health insurance premium coverage. Teaching by PhD students will be structured as mentored teaching experiences and separated from funding. And the total number of PhD students across a school or division will be fixed. Alongside this new funding model, the University will offer new career support for students, expand existing postgraduate teaching fellows programs, develop programs to help faculty become better mentors, and launch several initiatives to recruit and retain a diverse graduate student body.

In August the College Admissions Office expanded support for rural students and high school counselors through the UChicago Emerging Rural Leaders Program. Part of the UChicago Empower Initiative, the program was made possible by University trustee Byron D. Trott, AB’81, MBA’82, and his wife, Tina, longtime UChicago supporters and advocates of increasing college access for rural students. Empower expands financial support, on-campus programming, and online resources for first-generation students, rural students, and underrepresented students, beginning with the Class of 2023, who arrived on campus in September.

Chicago’s Seminary Co-op Bookstores, a nationally recognized independent bookseller and a fixture of the Hyde Park community since 1961, announced its new status as the country’s first not-for-profit bookstore whose mission is bookselling itself. In making the change, said director Jeff Deutsch in an October email to members and friends of the stores, “we more accurately place the work of the Seminary Co-op in the realm of the cultural institution while still recognizing our primary mission as booksellers.”

Albert A. Michelson, recipient of the 1907 Nobel Prize in Physics and the first US scientist to become a Nobelist, now has a campus namesake. In August the Physics Research Center became the Michelson Center for Physics—a workplace for 150 scientists exploring the nature of dark matter and dark energy, cosmic rays, black holes, and other questions about the universe. The building, which opened in 1965, underwent a wholesale renovation in 2017, including the addition of two floors.

For more than 55 years, incoming College students have gathered in Rockefeller Memorial Chapel during Orientation Week to hear a senior faculty member reflect on the purpose and nature of education in the Aims of Education Address. This year’s address was given by School of Social Service Administration dean Deborah Gorman-Smith, a member of the UChicago faculty since 2012 who studies youth development and the prevention of violence. Her September 26 lecture stressed the importance of challenging conventional wisdom and “learning by engaging outside the walls of the University.” It was followed by faculty-led colloquia in the residential houses where students had an opportunity to discuss the address and share their views.