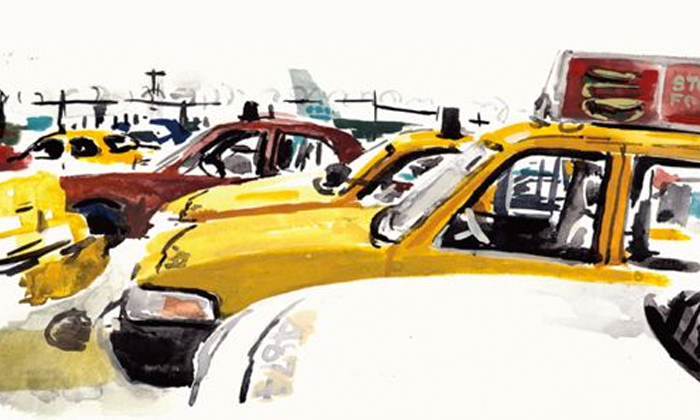 Chicago by the cab

Hack author Dmitry Samarov illuminates fragmentary visions of Chicago from the window of a taxicab.

Dmitry Samarov is not what I expected. Samarov, the author of Hack, a new release from the University of Chicago Press, is a painter-turned-cab driver-turned-writer. The man sitting in front of me is not a wiry, brooding artist type with a world-weary look in his eyes. Where is the furrowed brow? The black-rimmed glasses? The general air of dishevelment? 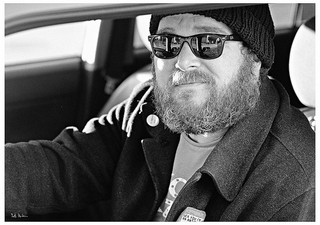 Instead, Dmitry Samarov is a tall, burly figure, with salt-and-pepper hair and a full red beard. He has an easy smile that he breaks into frequently, sometimes nervously, as Northwestern English professor and interviewer Bill Savage pokes and prods. As a part of the Graham School’s new interview series, Chicago by the Book, Samarov is at the Gleacher Center on a Tuesday night to discuss Hack, a collection of fragments witnessed during his years as a Chicago cabbie.

“I’ve picked up a lot of people outside this building,” Samarov says. “This is my first time inside this building, in fact.” The audience, an interesting mix of senior citizens and UChicago first-years in a summer program, laughs at the admission.

After receiving a BFA at the School of the Art Institute of Chicago in 1993, Samarov moved to Boston and got his “hackney carriage” license. In ’97, he moved back to Chicago and worked at various service industry jobs. During this period, Samarov produced two zines about his Boston cab-driving experiences before frustration with restaurants and bars—“vortices of bullshit drama and conflict,” as he puts it—pushed him back into cab driving. At the end of 2006, he began chronicling the quotidian yet oddly alluring bits that made up life as a cabbie in his blog, also titled Hack.

The blog caught the eye of press publicist Levi Stahl and Chicago Magazine’s Whet Moser, AB’04, both of whom encouraged Samarov. With the help of four editors, including Savage, Hack came together as a kind of patchwork “week in the life” of a cab driver, based on the types of rides that happen at each point in the week.

Samarov insists that he’s an artist first, and that he just fell into writing. “It’s a strange, strange world,” he says of being an author. For him, the two mediums are inextricably connected. Interspersed throughout the book are Samarov’s sketches and paintings of scenes from cab driving, which usually fit the story they accompany. The artwork, according to Samarov, always precedes the writing of the blog posts, though Samarov and Savage agree that both organically come from the same place; they seem to run parallel to one another rather than exist in any kind of hierarchy. He always kept a sketchbook with him—never a journal—and would purposely go to O’Hare when he knew the airport would be slow. He could quickly finish a painting before anyone waved a hand in his direction (the painting on the cover of Hack, in fact, was done outside O’Hare).

During the talk, I casually flip through the book. A simple watercolor of a cab driver in his taxi catches my eye. The silhouette of the driver has been left unpainted, a white absence surrounded by dark gray splotches with thick black contours that define the city around him. The title of the vignette on the opposite page is “The Only White Cabdriver in Chicago.” Many customers are surprised to see Samarov, and say so; Samarov reads between the lines: “You’re one of us, why on earth are you doing what we expect only our inferiors to be doing?” This fragment, though, is an anomaly: for the most part, Samarov stays away from passing judgment. What you see is what you get.

Savage is interested in the perspective on Chicago that Samarov possesses; as someone in a profession largely overlooked but deeply embedded into the urban infrastructure, he’s been exposed to “endless views” in his nine years of looking out the window. Savage asks Samarov what his favorite views in the city are, offering that he personally likes to “knit things together”—when the Metra goes by Chinatown, for one. “It’s not so cohesive,” Samarov responds. “It’s more of glances here or there.” He loves, for example, seeing instances of the juxtaposition of old and new in neighborhoods, but notes, “I want more neighborhoods to do well, but I don’t want them all to look the same.” Samarov lives in Beverly, a South Side neighborhood known for its historic residential architecture. Built between 1860 and 1940, the houses, including ones by Frank Lloyd Wright, George Maher, and Howard Van Doren Shaw, have remarkably remained largely unchanged.

During the talk, issues of city politics, racial stereotypes, and socioeconomic developments come up. Some expectations are overturned by experience. On dangerous neighborhoods: “Wrigleyville is a dangerous place for a cab driver. … You don’t antagonize the drunks.” But there’s a sense, even as Savage attempts to coax some political or social commentary out of Samarov, that the latter is really just as the brief recordings in Hack suggest: an acute observer of the outside world whose main interest lies not in grasping at overarching messages, but in seeing “the smaller details.”

A conversation with author Dmitry Samarov.