An interview with UChicago’s Hillary Chute, who convened an all-star lineup for a conference on comics.

For many, the big draw in Chicago this past weekend wasn’t the NATO summit but a three-day conference called Comics: Philosophy and Practice. The gathering brought together 17 giants of the genre—from Robert Crumb to Lynda Barry to Chris Ware—for an often hilarious, always illuminating look at graphic narrative. The conference mastermind, Hillary Chute, author of Graphic Women and Neubauer Family assistant professor in English, talked about the event.

How did you get all those people here, in one place, for the whole weekend?

I knew almost all of the participants, and I knew how much they were interested in each other’s work. So the list of invitees started to snowball, and the guest list just started filling out because people were so excited to have the chance to talk to their colleagues in this format.

What were some of your favorite moments of the conference?

One of my favorite moments was when there was actual disagreement happening, because to me that’s the sign of a good conference and not just a fun conference. Françoise Mouly and Robert Crumb were having a disagreement about his rejected cover for the New Yorker, and it got a little bit tense. But it was so exciting for me because they were talking about a real issue that came up throughout the whole weekend, which was this issue of comics assimilating into the mainstream.

Crumb may have put it a little starkly or harshly when he said, “Once you start doing covers for the New Yorker and you’re thinking of other people’s taste, you might as well cut your dick off.” (laughs) It was a moment of real disagreement around the cultural spaces of comics. I thought that was thrilling, even though some people thought it was upsetting that they were having such a vociferous disagreement.

It was funny, but a little shocking.

That’s exactly what I wanted to have happen in this conference: to have someone as interesting and as powerful as Françoise Mouly, who’s been the art editor of the New Yorker for 20 years, and someone as powerful and interesting as Robert Crumb—who’s really set the terms for the field and inspired every single person in attendance—be at odds about cultural venues for comics and trying to take stock of this awkward, emerging field of comics in the mainstream.

Not only were famous cartoonists present and speaking, but they were in the front rows of the audience, listening intently and piping up with questions and comments. Is that something you encouraged and expected?

Honestly, that was my dream for the conference and exactly what I hoped would happen. I talk to these people; I know them; I collaborated with Art Spiegelman on MetaMaus; I interviewed Aline Kominsky-Crumb; I am collaborating with Alison Bechdel this quarter. I have relationships with these cartoonists as individuals. And my intellectual fantasy for the conference was to have a platform where the students and faculty and cartoonists could talk to each other, but also where the cartoonists could respond to each other’s work.

So I was thrilled when Robert Crumb was piping up from the front row, and when Seth was asking questions of Aline Kominsky-Crumb.

Were there any amazing behind-the-scenes moments?

All of these people have never been together before, so there was something amazing about getting all 17 of them together for a group photo. Robert Crumb didn’t want to be in the picture at first, but Aline convinced him. I think that everyone just had such a blast.

After the conference was over, Lynda Barry came up to me and said, “It’s so amazing to be with some of my colleagues who I've never even met or had the chance to talk to before.” I can remember Lynda telling me about when she first read Crumb, and how she would copy his comics, and I think she mentioned this in her panel. And she said to me, “Do you know what it was like to have Robert Crumb sing a monkey song to me at a panel?” And then she burst into tears.

It was also really meaningful to put together all of these people who influenced each other in so many different ways. I know Lynda Barry influenced Ivan Brunetti [AB’89], and Robert Crumb and Gary Panter influenced Lynda Barry. And there they all were, on a panel together. I think all of the panelists actually found that really moving.

Was the fact this took place in Chicago significant, since the participants also influenced so many audience members who make comics?

Absolutely. That was one of the parts of the conference that I tried to conceptualize from the beginning, and I think it worked out really well. I invited several Chicago cartoonists specifically—people like John Porcellino and Laura Park, younger cartoonists in Chicago whose work is really amazing—and I know that others came.

Were there moments that showed why convening a conference can be better than just meeting up online?

The panel that Hamza Walker [AB’88] moderated Sunday morning, called “Lines on Paper,” was unbelievable. Hamza did an amazing job; he was the perfect interlocutor—and speaking of behind-the-scenes moments, he gave Lynda Barry the T-shirt off his back at lunch, a Raymond Pettibon T-shirt from a Renaissance Society show a few years ago. He took it off and gave it to her because she loved it so much.

The panel was great. Hamza sang, then Lynda sang, and the panel ended with Robert Crumb singing. And then there was a standing ovation. So being in the room you could really feel how electric it was.

What was the impact of the NATO summit happening at the same time?

I think that NATO affected the number of people who could actually make it to the conference space. For weeks I’d been stressed out with the idea that there literally wouldn’t be enough chairs in the auditorium for all the people who wanted to come. As it turned out, there were more empty seats than I had anticipated; I thought that there would be no empty seats at all because registration was actually overbooked and totally full.

I was disappointed about that because there was something really special about being able to share physical space with the cartoonists. On the other hand, I’m so thrilled that practically the entire weekend was webcast. People were able to watch online; we had people writing in from Argentina and Greece on Twitter. Someone traveled from Israel, so we had international interest.

Pulling this off makes you a rock star. How do you feel about that?

Oh (laughs), I think it’s the people who came who were the real stars. For me the coup was to get people to trust me enough to want to come to a conference I was organizing. On the opening night I read part of a postcard that R. Crumb had sent me expressing some of his reservations. But he came and he participated—sometimes without raising his hand—in an engaged and enthusiastic way the whole weekend.

One funny moment was when Hamza Walker was talking about DIY; that is, the do-it-yourself movement in art and publishing. And Crumb turned to someone and asked, “What’s DIY?”

I remember that. Of course he’s one of the godfathers of DIY, even if he doesn’t know it. He put out Zap Comix by himself in 1968. When his wife was pregnant, they stood on the corner and sold it out of a bassinet on Haight Street in San Francisco. So that’s the definition of DIY (laughs).

These people really helped create a lot of the culture that we now take for granted. Underground comics, do-it-yourself, and left-wing publishing really laid the groundwork for zines to happen in the US. Comics also laid the groundwork for all sorts of taboo shattering that we now take for granted. Crumb doesn’t know the linguistic commonplace, but he’s one of the people who helped make it happen. That was a fascinating cultural and generational moment to me. 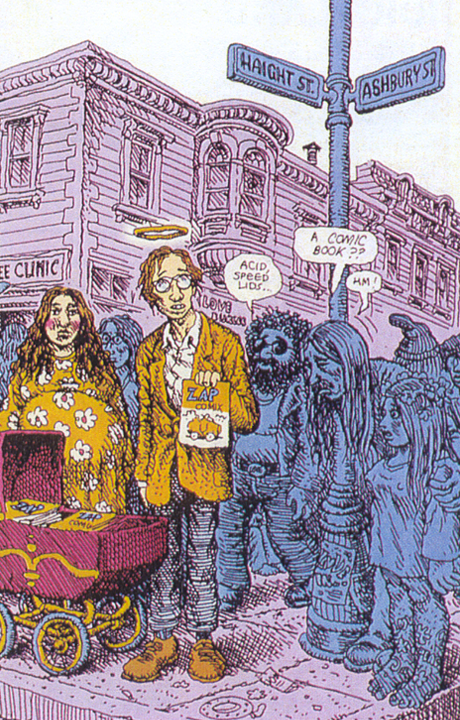 How about that moment when Crumb referred to a young women who asked him a question as a “cute thing”? The audience laughed nervously, and Lynda Barry started going, “Boing! Boing!” But he seemed unaware of the effect he had caused.

That was a live issue throughout the whole conference, and it made things tense but also, I think, really productively interesting. A lot of these people go to universities and give lectures and are, in a sense, part of academic discourse and contributing to it in a way that’s very obvious to them.

Someone like Art Spiegelman gives lectures all over the world at universities and taught a course on comics at Columbia a few years ago, so he’s part of this world. But then there are others who are actually counter-cultural people. And they don’t necessarily care about expectations for an academic conference.

What’s interesting is putting people with all sorts of different levels of comfort with, and interest in, academic discourse into a conference space at a university. That’s really enacting the whole idea of the Mellon residential fellowships for arts practice and scholarship and the Gray Center, which is to ask, where do arts and inquiry meet up?

Sometimes there were tense moments, like Robert calling a young person a cute thing when she stands up to ask him a question. But that’s what happens when you bring actual artists into this environment. You can’t just clean everyone up and sanitize them in the way you might when everyone there is a practicing professor or scholar.

Watch this space for videos of conference panels.