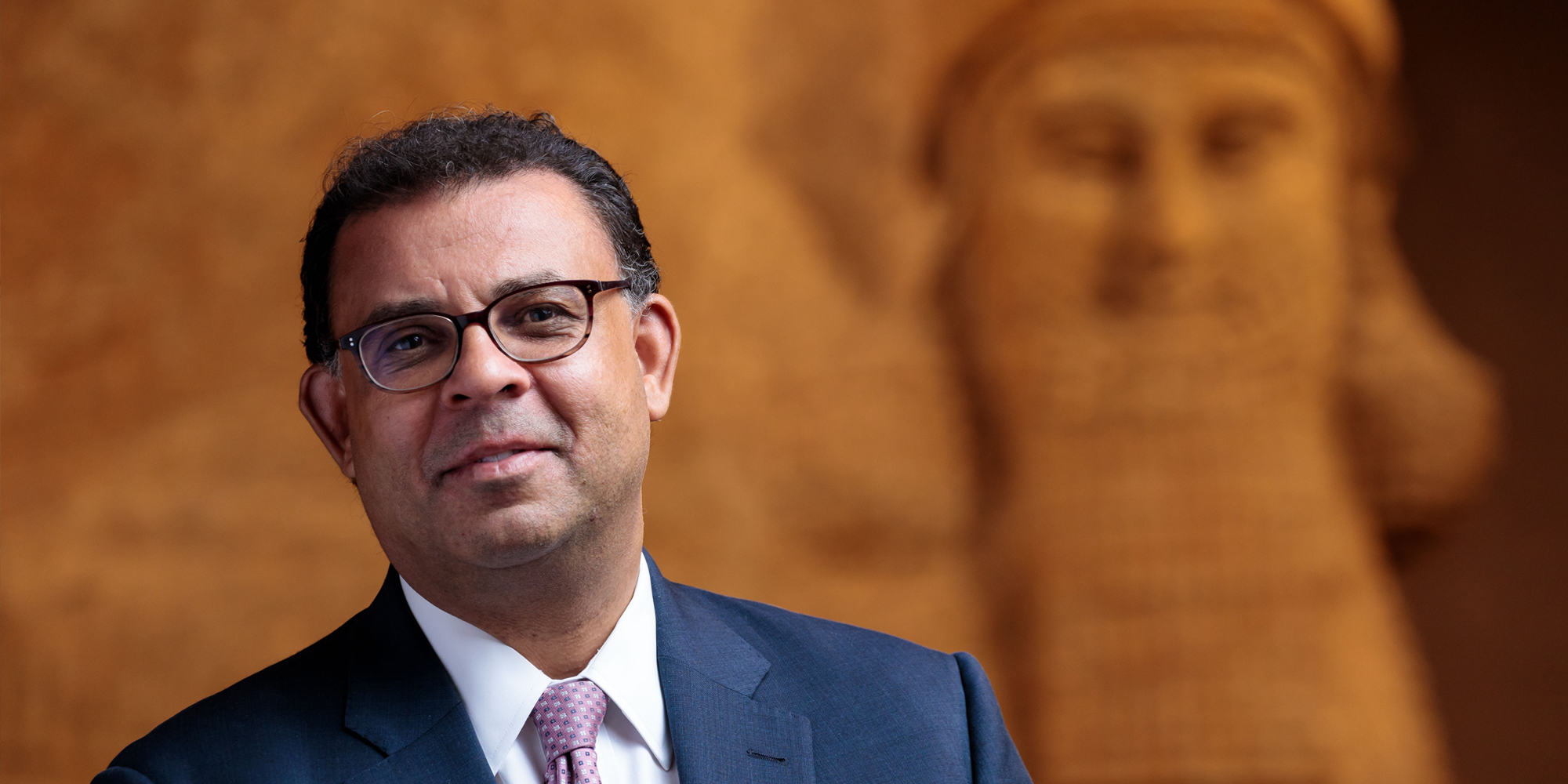 Director Christopher Woods, his work in Sumerology, and his vision for the OI’s second century.

By
Author
Sharla A. Paul
|
The University of Chicago Magazine
—
Summer/19

Through the very nature of his work, Oriental Institute director Christopher Woods uses the word isolate a lot. In philological terms—after all, Woods is a philologist—a linguistic isolate is a language that is unrelated to any other known language.

Sumerian, the language that Woods studies, is an isolate. It was spoken by the Sumerians, a people in ancient Mesopotamia who created one of the earliest civilizations. They farmed the rich land along the Tigris and Euphrates valleys in present-day southern Iraq, established the world’s first cities, built temples and palaces on a monumental scale, and created a canon of literature that includes stories about Gilgamesh, the legendary Sumerian king of the city of Uruk.

We know so much about the Sumerians because they also wrote. Around 3300 BC, roughly the same time that the Egyptians developed hieroglyphs, the Sumerians invented cuneiform, possibly the world’s first writing system. “Making language visible” is what Woods calls this remarkable moment. “What you’re writing right now”—he gestures at my jotted notes—“has its origins in what was invented in Sumer nearly 5,500 years ago.”

It’s early May, and Woods is fresh off visiting the OI’s archaeological dig in Nippur, Iraq, where work has recommenced this year for the first time since the outbreak of the first Gulf War. Woods has applied to the Iraqi Ministry of Culture, Tourism, and Antiquities for the archaeological concession to open new sites, heralding what he hopes will be a “new golden age for the OI” in the region.

Dressed in suit and tie, his desert attire retired for now, he sits in a maroon upholstered armchair in the ornate, wood-paneled director’s office. Asked about his vision for the OI at this centennial mark, Woods’s answer is immediate: to increase its visibility and profile—not necessarily academically, which needs no burnishing, but nationally and locally.

By local, he means for the OI to become a destination on the South Side, a hidden gem that’s hidden no more. To that end, the OI is adopting its initials as its brand and moving away from its outdated moniker, which Woods admits can be jarring to contemporary ears, though it’s actually a geographic term—oriental, as opposed to occidental—that was used to describe the Middle East when the OI was founded.

Woods also means to increase the OI’s visibility on campus. Building on a surge of new hires to the OI faculty in recent years, he anticipates a corresponding surge in interdisciplinary projects, with faculty drawing in colleagues from departments such as classics and art history.

Increasing visibility is an apt task for an isolate specialist. Woods, the John A. Wilson Professor of Sumerology, majored in physics at Yale and in his early 20s found his way into Sumerology by way of a lunchtime Akkadian class he took at Columbia University while working at a patent law office. He earned his PhD at Harvard and applied for a UChicago faculty position while still a graduate student. Since then, he’s spent his career at what he considers the field’s premier institution worldwide, the last two years leading it.

His work deciphers what he calls the “conceptual framework of Mesopotamian culture,” the mechanics of how the Mesopotamian mind conceived its world, as recorded on hundreds of thousands of extant clay tablets bearing the Sumerian language. These tablets have been dug up by archaeologists for more than a century, and the vast majority remain unpublished and untranslated. The ancient Sumerians shaped them from the alluvial clay of river beds and made styli from reeds to record economic transactions, literature, law codes, religious hymns, and historical narratives in wedge-shaped markings. During the third millennium BC, Semitic populations that dominated northern Babylonia mingled with Sumerians in the south, and by the early centuries of the second millennium BC, after a long period of bilingualism, Sumerian died as a vernacular
language and Akkadian became the language of the land.

All evidence of the Sumerian language was swallowed up by the earth in the multicentury process of municipal upkeep: constructing new mud-brick buildings atop fallen and eroded ones, layer upon layer, until conquerors came along, towns were abandoned, and finally giant earth-covered mounds, or tells, dotted the river valleys. Recovering the lost isolate of Sumerian has been the work of three generations of philologists and epigraphers around the world, including OI faculty Miguel Civil, who died this past January at age 92, and Thorkild Jacobsen, PhD’29, a Sumerologist who also served as OI director.

Such work is often done from museum collections, including the 350,000-plus-artifact research collection housed in the OI (more than 5,000 of them are on display). Woods is completing a monograph on early cuneiform writing and has another planned on Gilgamesh in the Sumerian literary tradition. His 2008 book, The Grammar of Perspective: The Sumerian Conjugation Prefixes as a System of Voice (Brill), analyzes an important but little-understood feature of Sumerian verbs: their conjugation prefixes. For well over a century, Sumerologists have proposed various, often incompatible, hypotheses to explain individual prefixes, but their basic functions and meanings remained ill-defined or unknown. Woods proposed that they constitute a complex system of grammatical voice that provided Sumerian speakers with a linguistic means of altering the perspective from which events may be viewed and ways to approximate in language the infinitely graded spectrum of human thought and experience.

Lining one of the built-in bookcases in his office is a massive set of blue hardbound books. The Chicago Assyrian Dictionary “took 90 years of scholarship to produce and resurrected the Babylonian and Assyrian languages that were the lingua franca of the ancient Middle East. There’s something very UChicago about that,” Woods says. Similarly, the Epigraphic Survey in Luxor, Egypt, has been in the field for 95 years, recording the hieroglyphic inscriptions and art of Luxor’s ancient monuments. As esoteric as the OI’s projects might seem, the work, says Woods, stays relevant because it’s actually the work of more deeply understanding ourselves. “Indirectly we are the cultural descendants of the people in the areas the OI studies. Mathematics, literature, political and religious institutions, how empires rise and fall—all of these things have their beginnings or a very early data point in this part of the world,” he says.

To anyone who ventures through its doors and stands face to face with its colossal Assyrian winged lamassu, Woods believes the OI provides a distant mirror revealing how people lived, how they loved, what they believed in.

“The parallels connect us to the past, but the differences are enlightening as well,” says Woods. “They tell you something about what it means to be human, about the scope of the human experience.”

He invites all of Chicago—all of the world, even—to come see for themselves.

Sharla A. Paul is a writer in Chicago.