Illustrations from The Market Assistant (1867) by Thomas F. DeVoe.

When shopping for food was like visiting a natural history museum.

“What does lion meat taste like?” That is perhaps the oddest question I have ever typed into Google. I’d received yet another e-mail from Change.org, asking me to sign the petition “No more lion burgers!” Apparently, there are restaurants in the United States that actually do serve lion meat (probably not lion burgers, but Change.org has a flair for marketing), including a restaurant in Kansas, a state I had not previously associated with foodie faddism. Which led to my logical query. In .46 of a second I had received 263,000 results, including “Why I Eat Lion and Other Exotic Meats” from PopSci. According to Dave Arnold, chef, inventor, and unapologetic lion consumer, “As the food revolution continues to gain traction, our ancestral lust for robust, unusual meats is starting to spark and reawaken. America was once the premier place to eat strange animals. We were world-renowned.” As evidence, Arnold cites The Market Assistant (1867) by Thomas F. DeVoe, a butcher at New York City’s Jefferson Market. “A trip to the market,” Arnold claims, “would have been like a trip to a natural history museum.”

I had to have this book—especially once I clicked over to Google Books and learned its full title: The Market Assistant, Containing a Brief Description of Every Article of Human Food Sold in the Public Markets of the Cities of New York, Boston, Philadelphia, and Brooklyn; Including the Various Domestic and Wild Animals, Poultry, Game, Fish, Vegetables, Fruits, &c., &c. with Many Curious Incidents and Anecdotes. The entire text is online, but I wanted to find it in a library. (Some freakish people like lion meat. Other freakish people like printed books.) And it was simple: there was a copy at Crerar. I had forgotten that Crerar has an extensive cookbook collection. 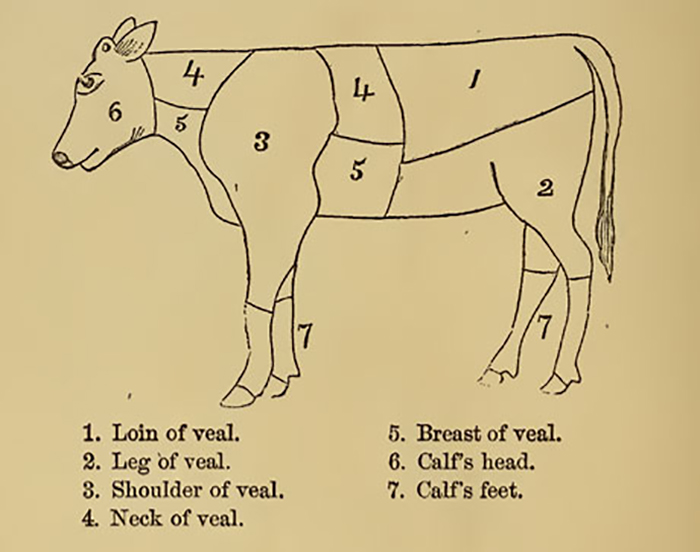 As part of my ignorant notions of “globalization” and “progress,” I had assumed that Americans had a wider range of basic food choices available to us now than ever before. And I was entirely wrong. Here is just a sampling of the meats you could buy in large cities 150 years ago (lion is not among them):

Squirrels. Among the varieties of squirrel found in our markets are the fox, cat, gray, black, and red. ... They are all ... edible, and much better eating than the rabbit.

Black bear. It is rather luscious but savory eating; that from a young bear, when nearly full-grown and fat, is considered best. Generally found in our markets in the late fall or winter months, and some years in great plenty.

Raccoon. The full-grown or old raccoon ... is quite rank and strong. The young are better; but I think them inferior eating.

Tame pigeons. Dry eating, but well flavored. ... They are only fit to fricassee, stew, or for a pie, etc. ... In olden times, or until the telegraph had commenced its operations, they were much used to convey messages, news, etc.

Green geese. This name is applied to the gosling that is about three parts grown—say from two to three months old. ... Many are prepared for our summer times, and they are considered very fine eating.

Wild swan or whistling swan. This is a scarce bird in our markets, although occasionally seen. They cygnets (young) are very fine eating, but should not be above a year or two old.

Robin, or red-breasted thrush. Large numbers of these well-known birds are found in our markets. ... They are fat and delicate eating.

Blue-jay. This handsome blue-bird is often seen in the fall months, tied up with robins, etc. in strings, for sale. ... Flesh is not so well flavored as the robin.

Common eel. A very sweet and savory fish, and always in our markets in plenty.

Dolphin. This beautiful-colored fish is sometimes brought to our markets, and when found it is not much thought of for the table. ... Perhaps passable to a hungry man.

Lump-fish or jelly-fish. One fine specimen of ten pounds weight was sent to me, which I had boiled. ... The skin was soft and well-tasted, while the flesh was harder but sweet: the bones were soft and porous and easily cut with a table-knife.

Green turtle. This fine turtle is well known to the epicure for its delicious steaks and the savory soup which it affords. ... The New York Daily Times, September 29, 1864, has “A Curiosity.—Mr. Brittan of the Mansion House, corner of Bleecker and Crosby streets, several weeks since, imported a lot of green turtle. They were killed shortly after their arrival, and nothing more thought of the affair, until yesterday, when about thirty young ones were found crawling about the premises. ... Several eggs had been laid near a wall heated by a range, and in that manner incubation had taken place. The little ones are quite a curiosity, being probably the first native-born green turtle ever seen in this city.”

There are hundreds of pages of these capsule descriptions. Not until page 320 does DeVoe turn to vegetables, and again he lists an astonishing range, including artichoke, celeriac, dock, dandelion, endive, lamb’s quarter, lentils, mangel wurtzel, milk-weed, nasturtium, purslane, rampion, salsify, sea-kale, sorrel, and truffles. Nearly all of these he likes, with one notable exception.

Garlic. This plant is a species of the onion, with an acrimonious taste, and a most disagreeable smell. ... It is much used by the French in a great many dishes … and has also many medicinal qualities.

So now having discovered Crerar’s cookbook collection, I’ve decided to work my way through it, with the goal of cooking one recipe per month. A cursory search of their holdings came up with a list worthy of The Market Assistant:

A Cookbook; The Stag at Ease, Compiled by Marian Squire; Being the Culinary Preferences of a Number of Distinguished Male Citizens of the World (1938).

It’s going to be an interesting year. I hope my kids are prepared for this.