From Crerar Library: A recipe for Chicago snow cream.

Months ago, when looking for a copy of Thomas F. DeVoe’s The Market Assistant (1867), I discovered row upon row of cookbooks in the basement of Crerar Library. 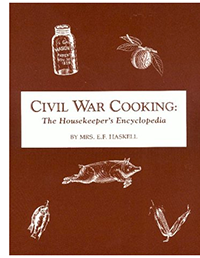 I had heard vague rumors about this collection but didn’t realize how truly expansive and delightful it was, with volumes like A Cookbook: The Stag at Ease; Being the Culinary Preferences of a Number of Distinguished Male Citizens of the World, compiled by Marian Squire (1938), and Allied Cookery [microform]: British, French, Italian, Belgian, Russian: Arranged to Aid the War Sufferers in the Devastated Districts of France (1916).

I immediately imagined a blog series—which could stretch on for years, if not decades—based on the recipes. Earlier in January, when Chicago was blanketed in powdery snow and the University was closed, the time seemed perfect to make my first Crerar recipe, which I shall call Chicago snow cream.

I found the recipe in Civil War Cooking: The Housekeeper’s Encyclopedia, a 1992 paperback reissue of an 1861 cookbook. (Its original title, The Housekeeper’s Encyclopedia of Useful Information for the Housekeeper in All Branches of Cooking and Domestic Economy: Containing the First Scientific and Reliable Rules for Putting Up All Kinds of Hermetically-Sealed Fruits, with or without Sugar, in Tin Cans or Common Bottles; Also Rules for Preserving Fruits in American and French Styles; with Tried Receipts for Making Domestic Wines, Catsups, Syrups, Cordials, Etc.; and Practical Directions for the Cultivation of Vegetables, Fruits, and Flowers, Destruction of Insects, Etc., Etc., was apparently 73 words too long for our fast-paced age.)

Like the Market Assistant, Civil War Cooking reflected a much more omnivorous food culture than we have today. The soup chapter, for example, includes recipes for veal, eel, mutton, turtle, and mock turtle soup (the “mock turtle” is actually calf’s head; preparing this soup, or even reading about its preparation, is not for the squeamish).

Flipping quickly to chapter 12, “Confectioneries, Creams, Etc.,” before I could be ill, I discovered recipes for the treats of yesteryear—molasses candy, maple sugar candy, taffy, lemon drops, comfits—as well as five different ways to make ice cream. These included Ice Cream without Cream, No. 3, which calls for scalded new milk thickened with flour: “If this is made properly it will be taken for rich cream.” I doubted my domestic skills were up to that, and anyway I’m partial to recipes with the word “quick” in the description, like this one.

Quick Ice Cream, No. 4.—Take a pint of rich sweet cream, sweeten very sweet, and flavor as relished with vanilla, lemon, or bitter almonds, very strong; beat the whole to a froth, and stir into it sufficient light dry snow to make it stiff, and serve immediately.

Typical of older recipe books, quantities are not specified, beyond a pint for the cream. With a little help from the Internet, here’s what I would suggest: 1 cup of cream (or half-and-half or milk), ½ cup white sugar, ½ teaspoon vanilla, and 6–8 cups clean, freshly fallen snow.

Even the cleanest snow—snow that has not touched the ground, but was collected in a soup pot set on the back porch—is not actually that clean, I discovered. I had to pick out a few bits of unidentifiable brown grit as well as a twig or two.

If you use a beater to whip the cream, it takes about two minutes to make, and the result is rich and sweet and far superior to supermarket ice cream. So rich that my kids didn’t want more than a few spoonfuls and kindly left their bowls for me to clean.

This assuaged my guilt, since I wasn’t sure whether or not I was poisoning them. A 2008 Chicago Tribune article, “Why Children Shouldn’t Eat Snow,” explained that it could contain “chemicals that fall in acid rain, bacteria, sulfates, nitrates, and even lead from areas in the world that still burn leaded gasoline.”

Tom Tian, AB’10, agreed to slog his way through the snow to photograph the snow cream but refused to eat it (citing bronchitis, out of politeness, I think). More for me.