By
Author
Adrianna Szenthe, AM’14
|
The University of Chicago Magazine
—
May–June/14

When a book wins an award, its popularity goes up—but so does the number of bad reviews. That was the paradoxical finding by Chicago Booth sociologist Amanda Sharkey and coauthor Balázs Kovács from the University of Lugano.

To examine the effect of literary accolades, the pair analyzed reviews on the Goodreads website—where ordinary readers post their ratings and assessments of books they’ve read—for 64 English-language books published between 2007 and 2011. Half of the books had won an award and the other half were short-listed for one but did not win. Goodreads users’ ratings of short-listed books remained fairly consistent over the two years following the award, but the ratings of prizewinning books declined.

The researchers offer three possible explanations. First, as the reading audience increases, it also becomes more diverse, attracting readers who may not normally select books of that type—what the study terms poor fit. Second, some readers value exclusivity and are turned off by a book’s soaring popularity—the snob effect. Finally, the researchers posit that an award raises expectations of a book’s quality, leaving readers more easily disappointed. The study was published in the March Administrative Sciences Quarterly. 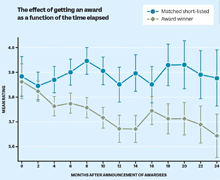