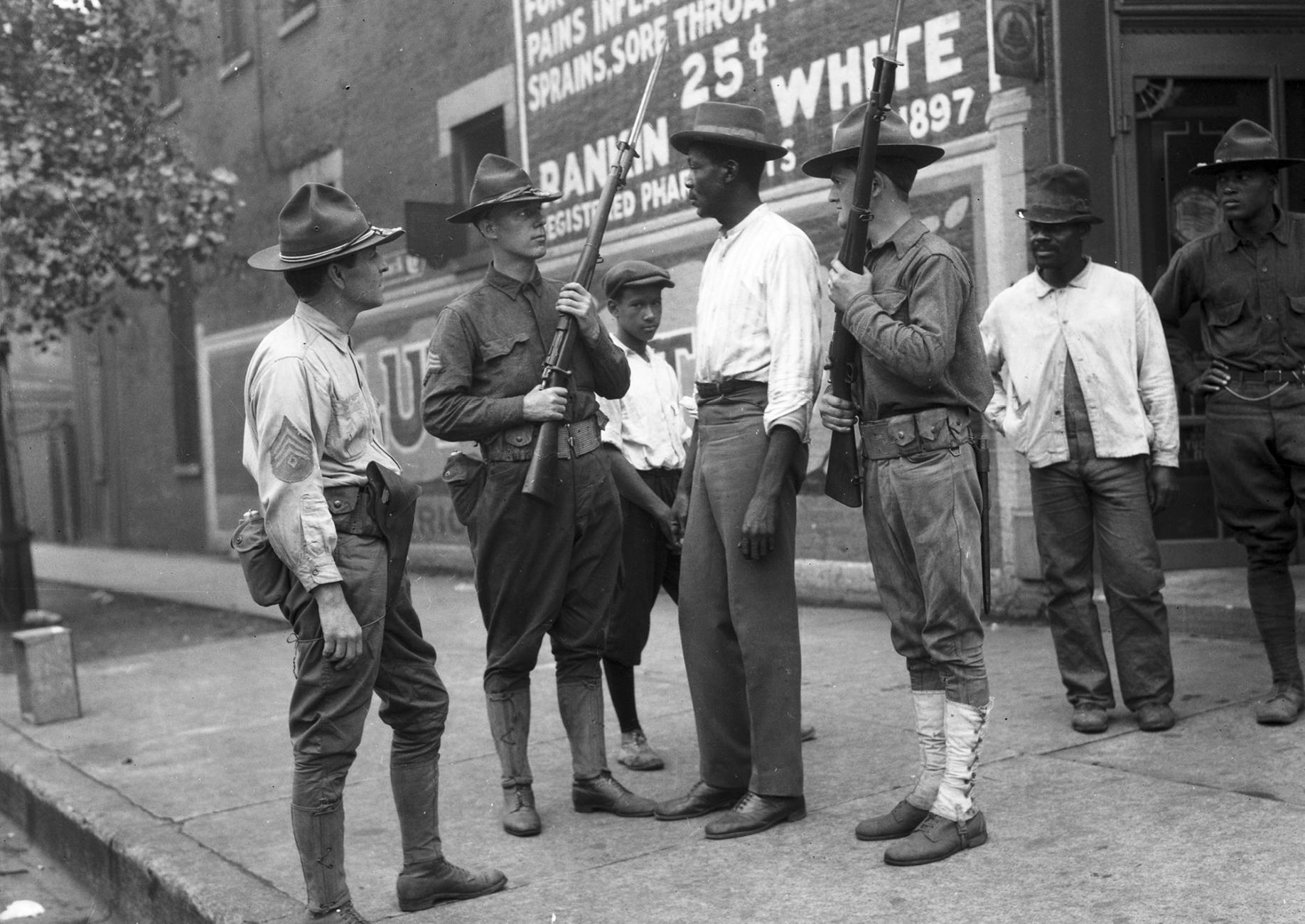 National Guard soldiers, like those shown here, were called out to put a stop to the weeklong race riot, which left 38 people dead and hundreds more injured. About two-thirds of the wounded were African American. (Photography by Jun Fujita, Chicago History Museum, ICHi-065477)

When Claire Hartfield, JD’82, was growing up in Hyde Park, she loved listening to her grandmother talk about life as a young woman in Chicago in the 1910s and ’20s. “Her stories were about the excitement of living in the Black Belt at that time,” Hartfield says. “What poet Langston Hughes referred to as ‘excitement from noon to noon.’”

In 2014, as Hartfield watched the footage of protests in Ferguson, Missouri, after Michael Brown was killed by a police officer, one of her grandmother’s stories came to mind.

Shortly after her grandmother had moved up to Chicago from the South, she was riding the streetcar home from work. “As she got closer to the black community, she saw mobs of young men out in the streets,” Hartfield says. The streetcar driver refused to let Hartfield’s grandmother off at her stop. She had to ride to the end of the line and walk home through “what turned out to be, when I did research, the first full day” of the weeklong 1919 race riot.

Hartfield’s book A Few Red Drops: The Chicago Race Riot of 1919 (Clarion Books, 2018) takes its title from a Carl Sandburg poem. The book, written with teens in mind, has received numerous honors and awards, including the 2019 Coretta Scott King Book Award, and was named a 2019 Illinois Reading Council Top Book to Read and a Chicago Public Library Best of the Best Books 2018. It’s Hartfield’s second book. Her first, the picture book Me and Uncle Romie (Dial Books, 2002), is a fictionalized story about Harlem Renaissance collage artist Romare Bearden.

A Few Red Drops begins on a hot July day, at a time when only the rich had electric fans. Five black teenagers decided to cool off by floating on a raft in Lake Michigan. When they drifted too close to what was then the “white” beach, a white man began throwing stones. One of the teens, Eugene Williams, was hit in the head and drowned.

The killing sparked a week of racial violence and arson. By the end, 38 people had died (23 black and 15 white) and a Lithuanian neighborhood had been burned to the ground by Irish gang members in blackface who wanted to keep the riot going. Hartfield’s book digs deep into the complex history of the riot: “The further back I went, the further back I had to go,” she said during a talk at 57th Street Books.

During Hartfield’s research, “I came to see that it’s intimately tied to what we’re going through,” she says. “It’s really a continuum” from the 1919 riots to the 2014 protests that sparked her idea. Hartfield wanted young people to have that context to understand the present.

On her website, she confesses she once made a list of the 10 best excuses for getting out of history class at Kenwood Academy. She began to understand why history mattered when she was asked to join an anti-apartheid march in 1977—and wanted to know how apartheid had happened in the first place.

“You can think of it this way,” Hartfield writes. “History is you if you had been born a little earlier.”After graduating from the Law School, Claire Hartfield, JD’82, oversaw the development of school desegregation plans for the cities of Chicago and Rockford, Illinois. She began to write books for young readers after becoming a parent and realizing that “some stories were not being told, important stories.”