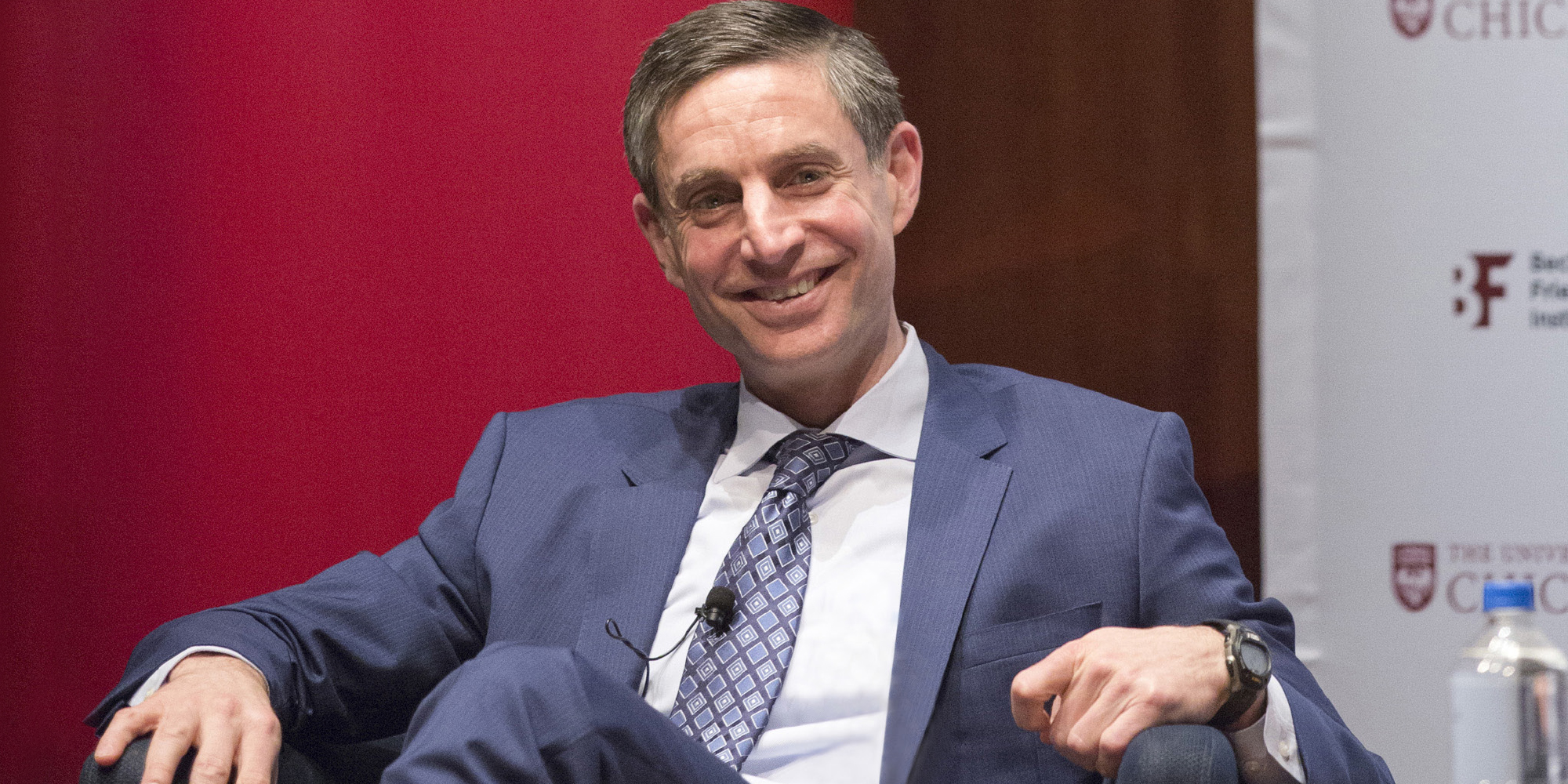 By
Author
Laura Demanski, AM’94
|
The University of Chicago Magazine
—
Winter/20

Michael Greenstone’s Hyde Park roots run deep. He represents the third generation of his family to serve on the UChicago faculty, and he’s been here at three stages of his education and career. The grandson of psychology professor Erika Fromm and son of political scientist J. David Greenstone, AM’60, PhD’63, and social worker Joan Fromm Greenstone, AB’62, AM’65, PhD’84, he graduated from the Laboratory Schools. He later held an assistant professorship in the UChicago economics department.

In 2014, after 12 years during which he was the 3M Professor of Environmental Economics at the Massachusetts Institute of Technology and served as chief economist of President Barack Obama’s White House Council of Economic Advisers, Greenstone, LAB’87, returned to UChicago as professor of economics and director of the Energy Policy Institute at the University of Chicago (EPIC). In 2016 he was appointed director of the Becker Friedman Institute for Economics (BFI). Today he holds both of those positions and is the Milton Friedman Distinguished Service Professor in the Kenneth C. Griffin Department of Economics, the College, and Harris Public Policy.

Last December the University launched EPIC-China, a research center based at the University of Chicago Center in Beijing. EPIC-China is conducting “frontier research on how to ensure access to inexpensive and reliable energy while meeting China’s ambitious goals to reduce pollution and confront climate change without unnecessarily compromising economic growth,” Greenstone says. It builds on a similar model of research he leads at UChicago’s Center in Delhi, EPIC-India. Greenstone spoke to the Magazine about the new venture in China, his intellectual path, and the meeting of scholarly research and practical policy. This interview has been edited and condensed.

What led you to work on environmental economics?

It sounds terribly corny, but I wanted to figure out a way to make a difference in the world. My dad and grandmother were academics, deeply committed to research and understanding the world, and my mom was a social worker. Looking back, I think I was trying to find a way to navigate between both of those. I wanted to find a way to do research that improves understanding about the world and can be used to make the world better; the University of Chicago is a perfect fit because it’s focused on inquiry and impact, as the tagline says.

All academics wake up each morning thinking about how to understand the world better, but there’s no playbook or cookbook for how to turn those ideas into action in the real world—we’re inventing the model as we go along. But that intersection is where I try to spend my time, and what BFI and EPIC try to facilitate.

How did you decide to study economics?

I couldn’t grow up in Hyde Park at the time I did without being deeply aware of differences in opportunity. So I went to graduate school thinking that I would work on poverty, welfare, education, the labor supply, and making sure there were more equal opportunities. I was really animated by that, but I could never quite find a question that I had something really important to add to. Then I wandered into environmental questions. I never took an environmental economics class; there weren’t any offered at Princeton University, where I got my PhD. My adviser joked that I was the greatest environmental economist ever produced by Princeton. Since I was the only one, I was also the worst. He took great joy in saying that.

What makes economics the best lens?

Science and technology are critically important; our global energy challenges cannot be solved without innovation. But economics teaches us that, without properly designed markets, those new technologies will all too often stay on the shelf or maybe never even be invented. And I think economics has a lot to add here by emphasizing the power of markets.

Also, a lot of the most interesting problems involve trade-offs. I believe economics has the best tools to help society understand the nature of the trade-offs. These are almost always political choices, but facts lead to better choices.

Why launch EPIC-China, and why now?

There’s the old joke about the bank robber Willie Sutton. They asked him, “Why do you rob banks?” and he said, “That’s where the money is.” If you want to study the global energy challenge, you’ve got to go to China. It’s had amazing success at increasing incomes in the last several decades, and a critical ingredient was inexpensive and reliable energy. It also had a massive increase in air pollution. Yet in the last five years, China has dedicated itself to reducing pollution, and has done so at a historically unprecedented rate. It will play a central role in determining the degree of global climate change we must all face. India is also grappling with how to balance the needs for inexpensive and reliable energy and clean air while avoiding disruptive climate change, and this is why we launched  EPIC-India in 2014.

If you want to tackle the jugular and not the capillaries of the global energy challenge, you’ve got to be in China and India. They aren’t the easiest places to start doing research. It probably took me 10 to 12 years to write my first paper on China, because of the difficulty of getting access to data and things like that. To put together continuing research and have a sustained influence there, the University can’t appear just once in a while. The idea is to develop long-lasting relationships with researchers and with government officials so that a level of trust develops.

In India this model is working: we’re now working in states that I think include more than half the country’s population. In China we haven’t been at it as long, but we’ve already launched a series of research projects in collaboration with the University of the Chinese Academy of Sciences, and I’m very optimistic about what we’re doing there.

What is EPIC working on here in Chicago?

One project is the Air Quality Life Index, which provides people around the world with a tangible measure of how much longer they could live if air pollution were reduced. The AQLI tool we developed has had users from every country in the world. Another major project is the Climate Impact Lab (CIL), which is developing the first empirically founded global estimate of the social cost of carbon—a measure of the monetary damages associated with the release of an additional ton of carbon dioxide into the atmosphere that is critical for setting policy—and producing hyperlocal estimates of what climate change will mean physically and economically around the planet.

Those are just two projects that I’m heavily involved with at EPIC. But EPIC is made up of a community of affiliated scholars from around the University who are in many cases leading their fields in topics ranging from the future of the US and global natural gas  markets to the cost and effectiveness of conservation efforts.

How does your experience in the policy world affect your work as an academic?

When I showed up in Washington in January 2009, I thought the policy world would be dying to know what economists have learned about the world. I imagined that maybe not Nancy Pelosi and maybe not John Boehner, but somebody on their staffs was reading my papers and knew that in column five of table eight, the policy answer existed. It was eye-opening that this was very, very far from the truth. I came to understand how badly economists communicate. We have developed a very precise language that makes it easy for us to talk to each other but keeps almost everyone else out.

So finding ways to better communicate with people who aren’t economists is something I’m deeply committed to. And BFI and EPIC are continually looking for new ways to make insights from economics research broadly accessible and powerful. Policy makers may never read table eight in my papers, but I shouldn’t be asking them to do so in the first place.

In exchange for these jobs that allow us to spend time learning about the world, I think we owe it to society to make our ideas accessible and useful.