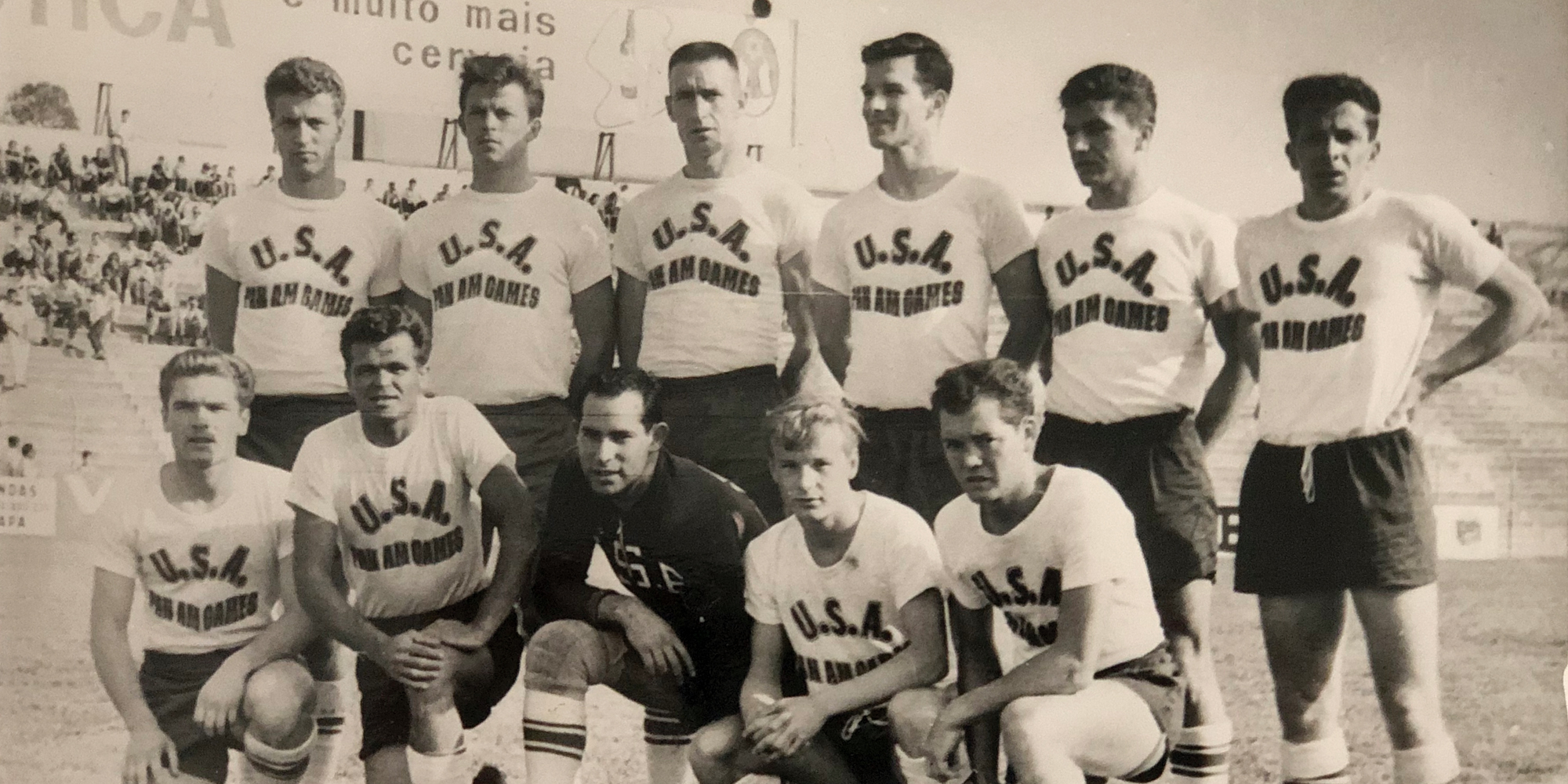 Len Oliver, PhD’70, was part of the 1963 US national soccer team (he is third from right in the back row). The team is shown here at the Pan American Games in São Paulo, Brazil. (Photo courtesy Len Oliver, PhD’70)

By
Author
Jeanie Chung
|
The University of Chicago Magazine
—
Spring/20

By the time he arrived at UChicago for graduate work in adult education, Len Oliver, PhD’70, had hung up his cleats. But he brought his soccer philosophy with him: stick with it no matter the score.

“Do your best,” says Oliver, a National Soccer Hall of Fame member. “Don’t worry about awards. Get something out of every experience.”

Later, as a coach and a trainer of coaches, he took a leadership approach based on principles he’d learned in graduate school. “I don’t lecture to them,” he says. “I get them involved and make them feel part of the game. Let them ask their questions early and get them talking.” He’s told the more than 5,000 youth coaches he has trained the same thing: let your players learn by doing.

“One of the great characters in American soccer” according to Washington Post sports writer Steven Goff, Oliver “has seen it all.” In addition to his legacy as a player, coach, and coaches’ mentor, Oliver will make another enduring contribution to the sport—and to athletes everywhere—by donating his brain after his death to a research foundation associated with Boston University.

Oliver estimates he suffered six concussions as a player, though at the time they were not diagnosed as such. As more and more research points to the dangers of traumatic brain injuries in sports, a number of notable athletes have chosen to donate their brains posthumously for medical research. Among them are Women’s World Cup veteran Brandi Chastain and Taylor Twellman, a former most valuable player in Major League Soccer. Oliver is now 86, so his decision is likely to come into play much sooner.

Sons of a Scottish immigrant, Oliver and his twin brother, Jim, followed in their father’s footsteps and grew up playing soccer—then largely considered an immigrants’ game—in Philadelphia. A midfielder, Len was an alternate for the 1952 Olympics in Helsinki and hoped to make the 1956 team. To keep his skills sharp, he played in a semipro league for a team called Uhrik Truckers. Before tryouts in the fall of 1955, an opposing player slide tackled him, breaking his fibula. Then, when it came time to try out for the 1960 team, he had mononucleosis.

“I was told that adversity builds character,” he has written. “I had my share of it.”

In between Olympic tryouts, Oliver served in the Army, where he stayed active in the game alongside his other commitments. Stationed at Fort Devens in Massachusetts, he played semipro. Later, while learning Romanian at a Monterey, California, language school, he commuted to San Francisco to play soccer on weekends. And he was on an armed forces all-star team while stationed in Germany.

After a brief stint in the CIA, Oliver got a master’s degree in labor economics from the University of Maryland. Staying on at the school to work at its conference center, he crossed paths with Cyril Houle, PhD’40, a UChicago faculty expert in adult education. The connection led to his enrollment in the University’s doctoral program in education in 1967.

While in graduate school Oliver worked on political campaigns for Abner Mikva, JD’51, and former civil rights advocate Al Raby, EX’69. His path toward a career in politics turned, however, when the National Endowment for the Humanities invited him to interview. He got the job and, drawing on his dissertation research on community education, set up local NEH programs in all 50 states and every US territory. After 11 years he left to form his own public policy consulting firm, Oliver Associates. The firm’s work in public education programs is grounded in a concept Oliver discovered late in his NEH career: study circles.

These small discussion groups—no fewer than five people, no more than 20—meet regularly, like a book club, for three to six sessions of two to three hours, often to explore a critical social issue. The idea is that people can overcome their lack of information and feelings of inadequacy in the face of complex problems by formulating their own ideas and sharing them with others. There are more than 300,000 study circles in Sweden, where Oliver first encountered them on a trip for the Kettering Foundation. He subsequently visited the country 12 times, enjoying both the soccer and the circles.

Oliver’s 1987 book, Study Circles: Coming Together for Personal Growth and Social Change (Seven Locks Press), helped introduce the idea in the United States, and he played a role in the founding of the Study Circle Resource Center, now known as Everyday Democracy. Founded in 1989, the organization initially focused on building community dialogue as an end in itself. It now works more specifically on finding solutions to pressing social problems.

Meanwhile, Oliver never strayed far from soccer. As his daughters, Erika and Britt-Karin, grew up, he coached their teams and found that his counterparts could use some coaching themselves. So, on top of his day job at his consulting firm, Oliver started training soccer coaches.

Traditional instruction involved a lot of lecturing and PowerPoint presentations—methods they brought back to leading their teams. But Oliver preferred to have his trainees get involved: to ask questions, participate in drills, keep moving. In turn, he expected them to do the same with their players. “That’s an adult education principle,” he says. “Involve the student in his or her own learning.”

He eventually became director of coaching for the DC Stoddert Soccer organization, which has more than 5,000 youth players.

Oliver is now retired from that post. Neither age nor his concussions have affected his mental sharpness. He holds season tickets for DC United games, where he’s always running into former students and players. His two grandchildren play soccer and call him Coach. “I just melt,” he says. “I’d rather be called Coach than Dr.”

And he’s taken up writing—about coaching techniques as well as his own long soccer story—for the Society for American Soccer History. It’s one more thread leading back to his UChicago days. “I’ll tell you,” he says, in “everything I’ve done since … I’ve applied concepts that I learned out there in graduate school.”

Earns a spot on the US Olympic team, though the United States does not end up qualifying for the games in Tokyo

Earns his PhD in education from the University of Chicago

Joins the National Endowment for the Humanities

Inducted into the National Soccer Hall of Fame

Announces he will donate his brain posthumously for concussion research