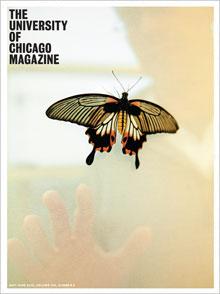 Crossing the borders of time

The tales we tell about our parents, and they about us.

Alumni and friends weigh in on the ethics and technics of astronomical skyscapes, how we die, religion and the law, the history of student life at Ida Noyes, and more.

Kenneth S. Polonsky, executive vice president for medical affairs, defines the pillars that support the mission of the new Center for Care and Discovery.

Wayne Scott, AB’86, AM’89, knows from painful experience that an A is not a scarlet letter around here—an F is.

Awakened by a grave robbery

Greg Bellow, AB’66, AM’68, reclaims his acclaimed father, novelist Saul Bellow, X’39, from those who would adopt him as their own.

At a conference on concussions, many questions and few answers.

Janice Guzon, ’14, will never see perfectly, but she’s focused on helping others.

Three alumni develop an online platform to streamline the path to publication.

Emily Oster applies economic principles to all of life’s questions.

Surviving a Hyde Park screening of the Jackie Robinson biopic 42.

Elephant in the room

As the Institute of Politics officially opens, Republican leaders offer diagnoses for a wounded party.

Architect Ann Beha retains the seminary building’s historic spirit and reshapes it for the future.

The University invests in a new Arts Incubator in Washington Park.

Chicago Booth statisticians do the math on the NHL’s overpaid or undervalued players.

Researchers study how the mind multitasks, investigate the interplay between asthma and the common cold, scan the brains of incarcerated psychopaths, and see how sleep helps songbirds learn.

Test your knowledge of Scav Hunt—and the UChicago state of mind that defines the items—with our true or farce quiz.