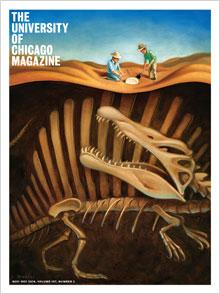 All over the map

High school students fan out to help the University’s Urban Health Initiative chart the resources in Chicago neighborhoods where there are too few.

Novelist Matthew Thomas, AB’97, talks about learning to hear the story that wants to be told.

French illustrators of World War I depicted the arena, the enemy, and the home front with bravura.

Getting lost in the Magazine’s archives offers a glimpse into the University’s history and inspires a commitment to ensuring its future.

A campaign built on values

Noah Berlatsky, AM’94, uncoils the rope that ties Wonder Woman to traditional male superheroes and to Twilight’s Bella.

Theories and particles collide in a documentary that captures the tension and intensity of discovery.

A new space for collaborative innovation opens on 53rd Street.

Finally, a dinosaur that swam.

Neuroscientist John Maunsell leads a new institute’s research into the mysteries of the brain.

Diverse neighborhoods help babies’ social learning; microbial fingerprints follow people from place to place; old-age insomnia is not always what it seems; and scientists trace the two genes the control monarch butterflies’ colors and their capacity to fly long distances.

Art to text with

The Smart Museum revives, and updates, a generous tradition.