Finally, a dinosaur that swam.

Paleontologists have long wondered: where are the dinosaurs that swam? Not just those that waded in and fished prey out of the shallows, but ones that actually lived in the water? One common view held that they simply didn’t exist: the fossils in museums and textbooks all belong to terrestrial dinosaurs. But in September, a Science paper put forward evidence of the first swimming dinosaur ever identified. Coauthored by a team of researchers that included two UChicago paleontologists, postdoc Nizar Ibrahim and professor Paul Sereno, the paper details findings of Spinosaurus aegyptiacus, a semiaquatic Cretaceous-era carnivore from North Africa. It is also the largest predatory dinosaur ever found—at least 50 feet long, Spinosaurus outmeasures even Tyrannosaurus rex fossils. Among its aquatic adaptations were curved, bladelike claws for hooking slippery prey; dense bones that aided underwater swimming; and a small pelvis and short hind legs with muscular thighs, good for paddling. Those limb adaptations resemble early whales.

For Spinosaurus, this is a second coming. A century ago, German paleontologist Ernst Freiherr Stromer von Reichenbach found the first evidence of the dinosaur, but his fossils were destroyed in World War II. His notes, sketches, and photos survived, and the researchers used them to link Stromer’s original discovery to a new partial skeleton unearthed in the Moroccan Sahara.

Spinosaurus in swimming pose, with known bones in red. 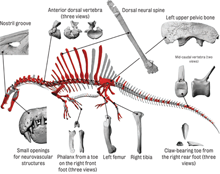 Spinosaurus in swimming pose, with known bones in red.