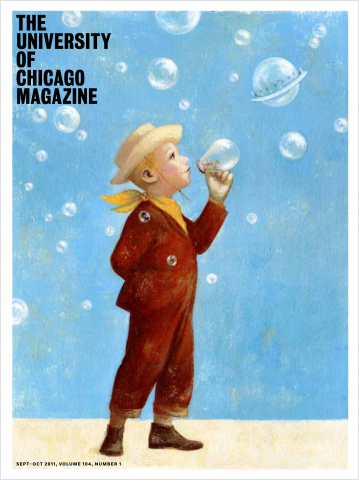 Nadrian Seeman, SB’66, uses DNA not to study biology but as a building block for nano-tiny structures.

... Reg Egg, Igloo: As quickly as students have dreamed up pet names for Mansueto, they’ve adopted the futuristic library as their own.

For one alumna, Mansueto’s opening recalls the change in Russian libraries since the Glasnost days.

Alzheimer’s has erased the stories behind Lou Fourcher’s (PhD’71) images, but his photographs of a demolished West Side neighborhood have stirred memories in former residents.

For 41 years Stanton Friedman, SB’55, SM’56, has traveled the world with a simple message: UFOs are real.

Amid a gathering storm, students grapple with 1960s turbulence.

Philip Schiller, AB’55, built one of the country’s most comprehensive collections.

Volunteer projectionists at Doc Films try to keep an old technology from flickering out.

Theaster Gates hopes to transform a neighborhood through art.

How the sense of connection to a “future self” affects consumer choices.

Are there more Federalists, Objectivists, or zombie fighters?

On the up and up

Economist Bruce Meyer studies the myth of the middle-class squeeze.

A look back at a more civil discourse, on a University-broadcast radio forerunner to Sunday morning talk shows.

In a rare procedure, UChicago doctors give a patient a new heart, liver, and kidney.

The Magazine lists a selection of general-interest books, films, and albums by alumni. For additional alumni releases, use the link to the Magazine’s Goodreads bookshelf.

Before her daughter arrived, a baby photo from the orphanage was the only thing the author had.