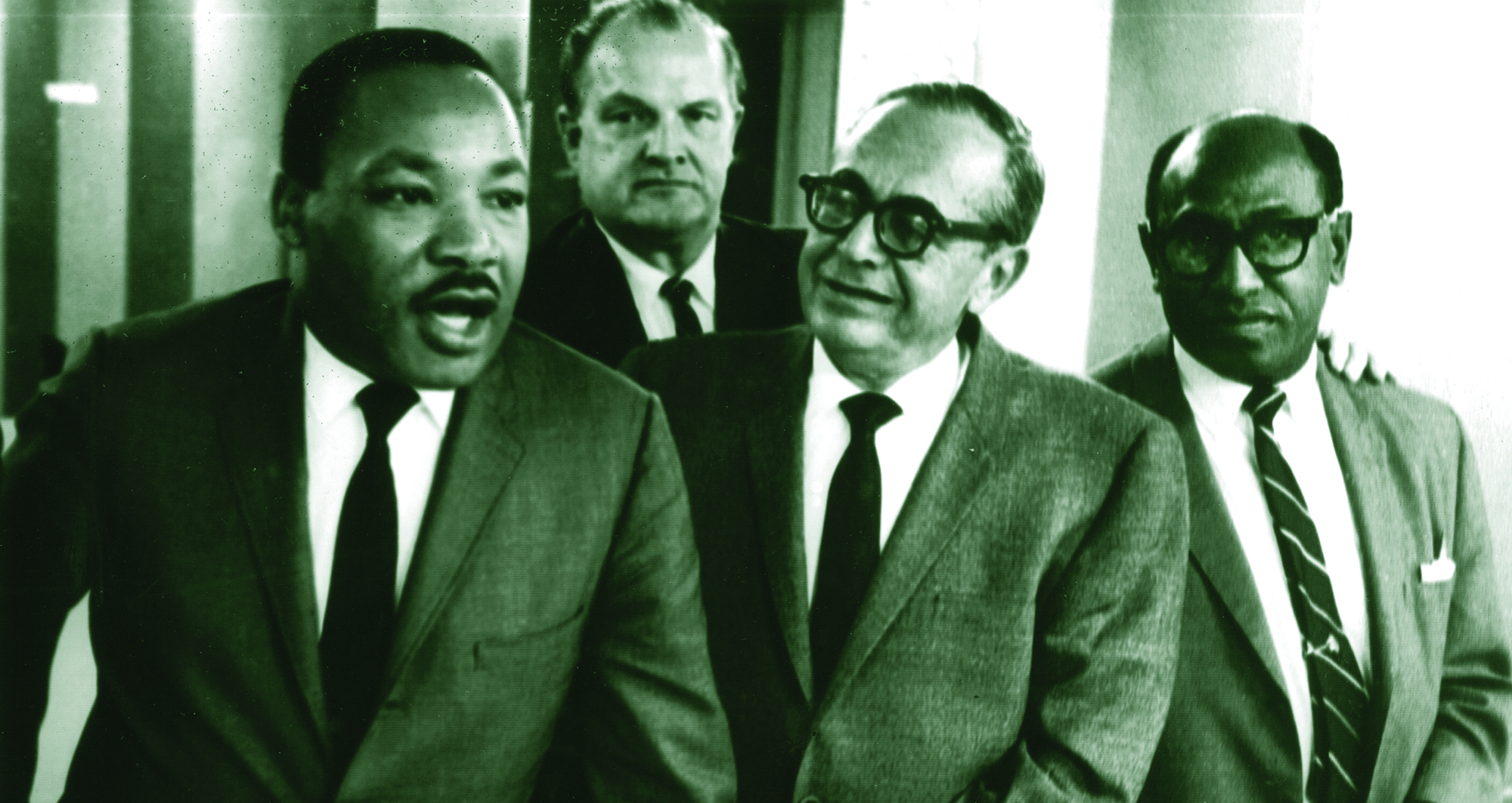 Timuel Black (right) and Martin Luther King Jr. (left), shown here with labor leaders in Chicago in the 1960s, got to know each other well during the civil rights movement. (Photo courtesy Vivian G. Harsh Society)

By
Author
Jason Kelly
|
The University of Chicago Magazine
—
Fall/18

Timuel D. Black Jr., AM’54, stands at the front of the bus, telling stories. Most of them originate on these streets, in Bronzeville, just north of the University of Chicago campus, and today he’s dispensing the wisdom of his 100 years to about 20 first-year students on an Orientation Week tour.

A microphone lifts Black’s voice above the rattle and hiss of the bus, and he rests one hand on a seat for support, swaying a little in the aisle with each stop and start. Those sitting closest to him seem to be on low-key alert, in case the momentum of the moving vehicle causes Black to lose his balance. Bart Schultz, PhD’87, director of the Civic Knowledge Project, organizer of the tour, and editor of Black’s forthcoming autobiography, also stands ready with names or facts that might escape him.

None of the precautions are necessary. Evidence of Black’s age is minimal, a slight shuffle in his step and a circuitous storytelling style, like his beloved jazz, that wends its way to unexpected places only to circle back to a refrain. “A change is gonna come, young people,” he says again and again to punctuate his riffs.

From beneath the brim of his Tuskegee Airmen cap, Black shares insights into how he worked for change during America’s contentious 20th century. His narrative meanders across decades—from the boldfaced names he knew as a boy (Nat King Cole, the artist Charles White, the original Harlem Globetrotters) to his experiences in Normandy, the Battle of the Bulge, and Buchenwald in World War II; to the civil rights movement; to his association with black political pioneers Harold Washington; Carol Moseley Braun, JD’72; and Barack Obama.

“He is one of the city’s great storytellers,” says Kenneth Warren, the Fairfax M. Cone Distinguished Service Professor in English. “He’s lived long enough to have known in person various players on the scene of the city of Chicago going back to the early part of the 20th century. He is a kind of walking history.”

Black’s family migrated from his birthplace in Birmingham, Alabama, to Chicago in 1919. From when he was an infant, he experienced the racial degradations of restrictive covenants that kept families like his confined to South Side neighborhoods known as “the black belt.” By law and custom, he grew up restricted and disrespected.

When Charles Lindbergh appeared in Chicago after his 1927 solo flight across the Atlantic, Black was among the students from Edmund Burke Elementary School who went to see the American hero. Lindbergh patted all the white children on the head, but not their black classmates. The sting of Lucky Lindy’s slight stayed with little Tim Black for years and, when the aviator became a Nazi sympathizer, “all those who had not been patted on the head were not surprised,” Black says.

After US involvement in World War II became inevitable, Black at first felt no patriotic impulse to fight. On December 7, 1941, his 23rd birthday, he shrugged off shouts of “Pearl Harbor has been bombed!” and the subsequent American mobilization with wisecracks: “She shouldn’t have drank so much” and “I don’t have an Uncle Sam.” In 1943, though, he was drafted and Private Black went to Europe, where he would be exposed to humanity at its worst.

Black endured the Battle of the Bulge at the end of 1944 and advanced into Germany as the war wound down, bracing to see the liberated concentration camps, the subject of stories more horrific than anything he had witnessed in combat. The Jews and Roma still clinging to life at the Buchenwald camp etched themselves into Black’s memory even before he saw them. An odor and a wail carried beyond the walls.

“It was barely recognizable as human,” he writes in his autobiography, Sacred Ground: The Chicago Streets of Timuel Black (Northwestern University Press, forthcoming 2019). “Nowhere had I encountered anything like that smell or that sound.”

He associated the suffering of Nazi victims with that of American slaves, including his grandparents. Black returned from World War II, decorated with four battle stars, as an activist intent on insisting his country live up to its ideals, not only for the racially oppressed, but for stockyard laborers like his father, for women, and for religious minorities alike.

Black went to college first, earning a sociology degree in 1952 from Roosevelt University, then on to the University of Chicago for his master’s and course work toward a PhD. The civil rights movement kept his dissertation in a drawer.

In December 1955, Black saw Martin Luther King Jr. on television discussing the Montgomery bus boycott. Black felt so inspired that he was on a plane to Alabama within days. Months later, his efforts helped bring King to Rockefeller Chapel for his first major speech in Chicago.

Immersing himself in the movement, Black got to know King so well that they sometimes called each other “TD” and “Doc.” Although Black supported nonviolent protest as a tactic, he writes that he “could not share it at the spiritual level of Dr. King,” not after facing police dogs and firehoses outside the 16th Street Baptist Church in Birmingham.

For Black, “the links between jobs and justice,” the labor issues that A. Philip Randolph had championed since the 1910s as vital to African American freedom, represented the essence of the struggle. Randolph led the 1963 March on Washington, and Black served as an organizer of Chicago’s “freedom trains” that ferried thousands to the site of King’s “I Have a Dream” speech.

Despite his connections to icons like King and Randolph, and his influential political activism on behalf of city, state, and national politicians, Black retains a grassroots sensibility. The stories of students and strangers, and especially his neighbors on the “sacred” South Side streets where he has lived his whole life, still interest him most.

Teaching high school for more than a decade, including in South Side public schools, he helped educate a generation coming of age as the country confronted its insufficient commitment to equality. Black influenced students like Hyde Park Academy’s Jesse Brown, who joined the Marines and, after being wounded in Vietnam, would go on to become the Disabled American Veterans executive director and US secretary of veterans affairs under President Bill Clinton.

“You taught us to have self-respect,” Brown says in the second volume of Black’s oral history, Bridges of Memory (Northwestern University Press, 2007), “and helped us to learn that we as a people don’t have any reason to be ashamed of who we are or apologize to anyone for the way that we look.”

Bridges of Memory collects stories like Brown’s and those of Black’s family, chronicling the lives they built after fleeing the Jim Crow South for Chicago. Those works, Warren says, place Black in the tradition of Carl Sandburg and Studs Terkel, PhB’32, JD’34, as “individuals who are part of the political life of the city, but who are also able to synthesize a view of Chicago history, most importantly, from the standpoint of … everyday working Chicagoans who are trying to live through the transformations and conflicts” of their times.

Black engaged the conflicts and shaped the transformations, valuing action over talk as a measure of impact. “It’s not what you say, it’s what you do that makes a difference,” Black tells the students on the bus tour, updating a mantra of his grandma’s, against which even the public figures he most admired were sometimes found wanting.

As he relates in Sacred Ground, when his grandma caught him playing with matches or otherwise misbehaving she would wave away his denials with, “Baby, I cain’t hear whatcha sayin’ because whatcha doin’ talks so loud.”

Politicians and boys with matches might not be able to withstand such scrutiny, but the measure of Black’s long life, in word and deed, holds up well.

1944–45
Landed on Utah Beach days after the invasion of Normandy, participated in the Battle of the Bulge, and visited Buchenwald concentration camp.

1955
Traveled to Alabama to join the Montgomery bus boycott.

1963
Lost campaign for Chicago alderman as part of an effort with other candidates to unseat the “Silent Six,” black officials loyal to Mayor Richard J. Daley.

1963–64
Mobilized over 200,000 people for two boycotts of Chicago Public Schools in an effort to end school segregation.

1982
Led a voter registration initiative in support of Chicago mayoral candidate Harold Washington, which added 250,000 people to the city’s rolls.