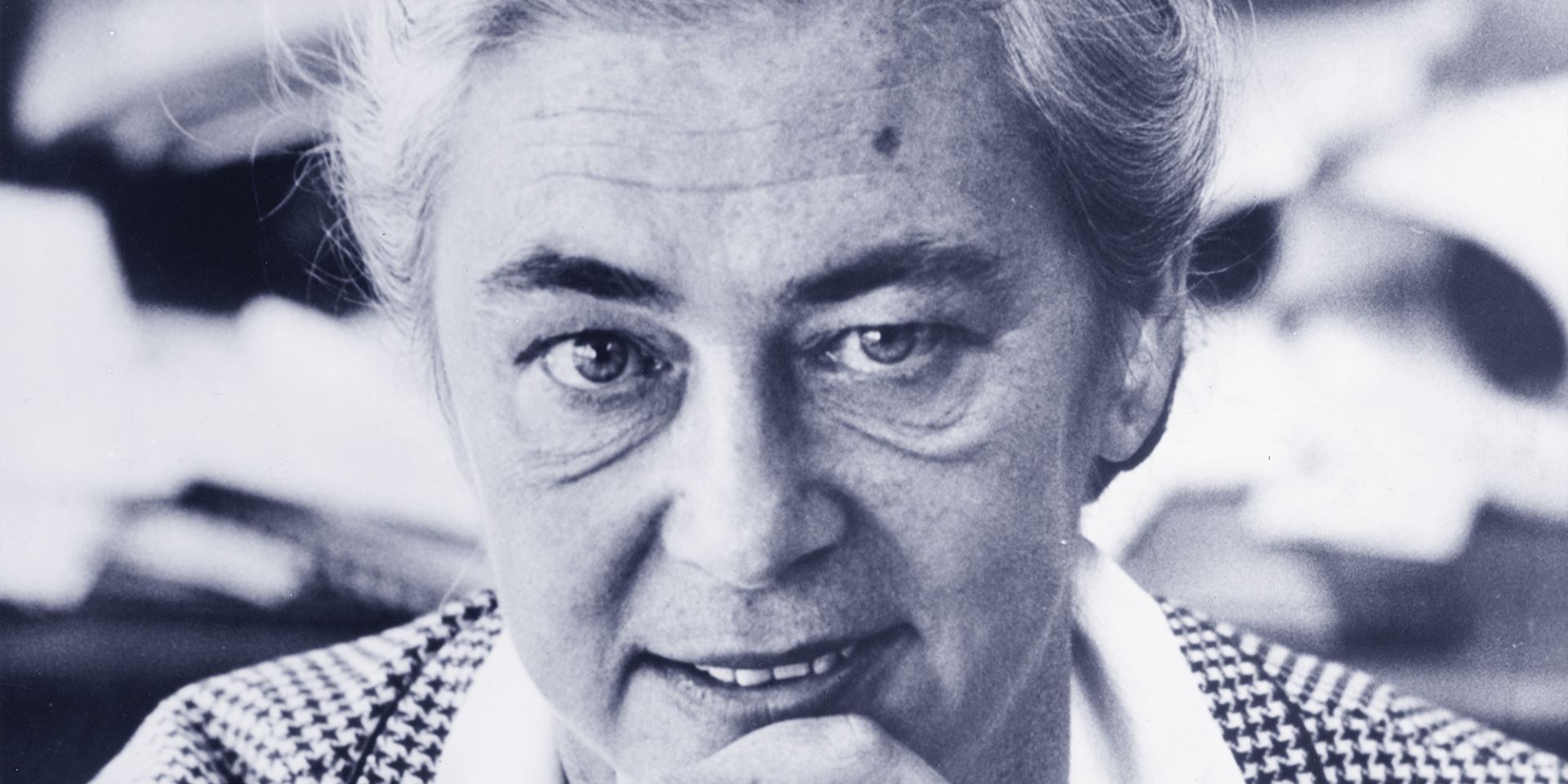 Both Harvard and the University of Chicago count Soia Mentschikoff as the first woman to join their law schools’ respective faculties. (Copyright 2019, The Chicago Maroon. All rights reserved. Reprinted with Permission.)

By
Author
Jason Kelly
|
The University of Chicago Magazine
—
Winter/19

When Soia Mentschikoff entered a room, an atmospheric change swept in with her.

“You had to experience this to understand it,” former University of Miami president Edward T. Foote II wrote in tribute to Mentschikoff after her 1984 death from cancer at age 69. “Suddenly, there was an excitement. People looked at her, the pace of the conversation quickened, things in that room became strangely more interesting.”

Strangely, it seems, because Mentschikoff’s muted bearing belied her radiating charisma. To be sure, she cultivated and exercised authority, first as a practicing Wall Street lawyer, then during two decades on the University of Chicago faculty, and later as the University of Miami Law School dean. Students at Miami called Mentschikoff, born in Russia to American parents, “the tsarina.” The late Columbia University law professor E. Allan Farnsworth listed a litany of parallels between her and Catherine the Great: “intelligence, intellectual curiosity, self-assurance, elemental energy, personal magnetism, a tendency toward autocracy, and—perhaps most of all—an urge to reform.”

She made that regal impression without ostentatious displays of strength, building a reputation on the substance, direct and sometimes barbed, of her words. “Her candor,” Foote said, “shocked all the more for being so gently said.”

Her gentle voice carried the force of law. With a leading role in the development of the Uniform Commercial Code, for example, Mentschikoff exerted enduring influence over the US legal and economic landscape through the promulgation of a doctrine that has become a fundamental basis of doing business.

Published in 1952, the code had nine complex articles covering subjects such as sales, leases, and investment securities, and a single purpose: to create a universal legal framework governing commercial transactions across state lines, easing the sale and delivery of goods and services. At the time, the widespread adoption by state legislatures was no foregone conclusion. Powerful interests resisted. Emmett F. Smith, Chase National Bank’s lead counsel, argued that the code would create confusion by uniting unrelated issues under a single rubric and put years of knowledge among industry veterans to waste as they adapted to sweeping new regulations.

Together with her husband, Karl Llewellyn, Mentschikoff was among the code’s primary drafters—and, later, defenders. They had met in the 1930s at Columbia University, where Llewellyn was a professor and Mentschikoff a law student who, after becoming the first female partner in a Wall Street law firm, would join the legal academy as the first woman to teach at Harvard Law School.

In 1951 they were recruited together to teach at the University of Chicago Law School. Llewellyn, so influential that he would become one of the 20 most-cited legal scholars of the 20th century, was appointed professor. Mentschikoff was hired as a “professorial lecturer,” a bit of title finagling from Dean Edward H. Levi, LAB’28, PhB’32, JD’35, to evade an antinepotism policy. Despite her ostensibly lesser rank, “Mentschikoff was still treated as a full, tenured faculty member,” according to Zipporah Batshaw Wiseman in Women in Law: A Bio-Bibliographical Sourcebook (Greenwood Press, 1996). Upon her arrival, in fact, Levi gilded the lily with the boast that he had appointed the first female full professor at a major law school—despite the fact that Mentschikoff would not hold that title until Llewellyn’s death in 1962.

Her status in the legal community needed no more burnishing than her husband’s. After the publication of the Uniform Commercial Code, the couple remained in the spotlight as they lobbied state regulators and lawmakers on its merits.

In 1954 New York’s Law Revision Commission held bellwether hearings. Without New York, the epicenter of US commerce, the code’s impact would be diluted to the point of insignificance. Mentschikoff’s testimony parried opposition from Wall Street titans with a fencer’s deftness. The arguments of big banks, she said at the hearing, suggested corporate practices that were “conditioned not on the reality of case or statutory law, but upon a never-never land of imagined law.”

Llewellyn returned from the proceedings puffed up with pride at his wife’s performance. “Karl could talk of nothing other than how ‘The Mentschikoff’ had stood toe-to-toe against a phalanx of Wall Street lawyers whose clients, the big banks, opposed much of the U.C.C. and how she had bested them all,” remembered Alan C. Swan, JD’57, a student in Llewellyn’s Elements of the Law course at the time. Aside from minor state-level modifications, every state ultimately adopted the code, with only Louisiana having failed to enact all of its articles, an achievement that owes much to Mentschikoff’s early advocacy.

Llewellyn often gushed with admiration over her rhetorical prowess. Before the couple joined the UChicago faculty, Llewellyn spoke at a conference alongside Levi, who praised his address, envious of the “very special talent” he had displayed in engaging the audience. Llewellyn just said, “But you should hear Soia—my gal can sail ships.”

She could have sold them, too, Levi concluded after working with her for decades. “It is a good thing for our society,” he said, toasting her 1982 retirement from Miami, “that she doesn’t want to sell anything.”

More than anything, Mentschikoff wanted to teach—“to create lawyers,” Levi said. “She loved her students,” Foote wrote, “even when she flayed them for offering less than their best.”

They loved her in return, not because of any “magic in the classroom,” Wiseman writes, but for Mentschikoff’s professional example, generous counsel, and genuine concern that fostered relationships that lasted long past graduation. The late Richard G. Huber, a student at Harvard in the late 1940s who went on to become dean of the Boston College Law School and remained a lifelong friend, remembered how “she charmed us all … with her interest in us, in what we were doing, and by her thoughtfulness.”

At Chicago, Mentschikoff and Llewellyn made their home a bustling gathering place. The couple lived in grand style, having waved away the idea of an eight-room house that had been scouted before their arrival in favor of a Kenwood mansion about three times that size.

With Mentschikoff’s parents also living there, along with two nieces whom she raised, two cats, a miniature poodle named Happy, and friends always coming and going, they needed the room. She relished being a host at the convivial intellectual salons they held—and, often, the distributor of chores to those in attendance. “At any one time,” Levi said, “one might see a federal judge pushing her car out of the snow; or a visiting theologian walking her dog; or a busy trial lawyer, whose time could have bought the whole block, feeding her cats.”

Mentschikoff’s feats of delegation paled next to her own acts of dedication. As dean at Miami, she could be found cleaning the student lounge to prepare the space for registration. Before a conference on the legal dimensions of the Iran hostage crisis, Swan recalled, she summoned her former student, whom she had recruited to Miami as a professor years earlier, for what became a two-hour discussion of the issues combined with a detailed logistical spit and polish. “We pushed tables around, reset the chairs, tested the microphones, called in the painters, scouted for potted palms.”

During her eight-year tenure, Mentschikoff’s main responsibilities involved strengthening the faculty, admitting a smaller but more accomplished student body, enhancing the law library, fundraising for new facilities—all the usual administrative ways and means. But that after-hours heavy lifting before the conference fell well within her own definition of a dean as “the guy who gets paid to stay and turn off the lights.”

Given the trails she blazed and the intellectual currents she generated, many people thought of Mentschikoff not as the one who flipped the switch, but as the light source itself.