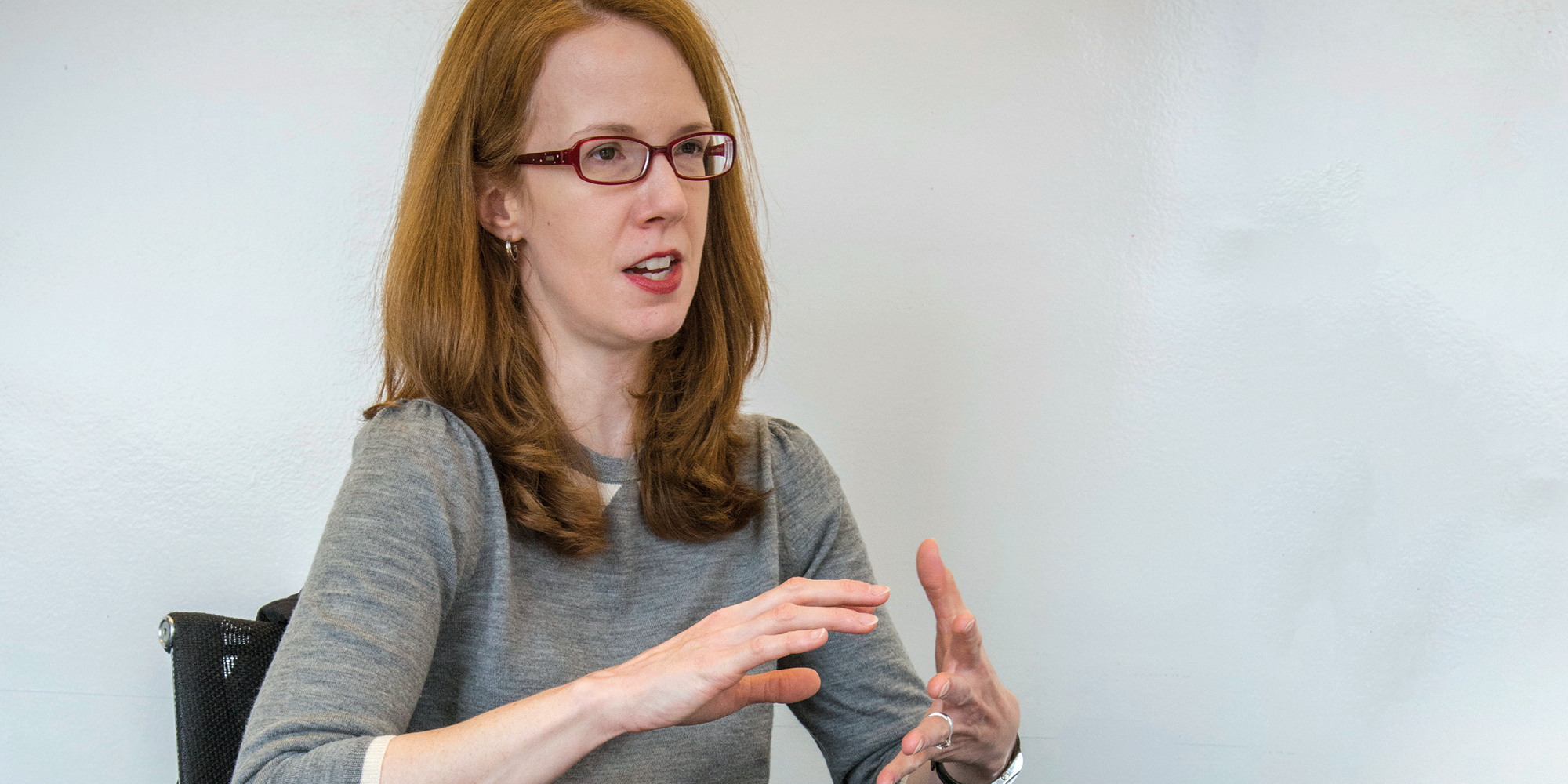 In a new book, LaCroix looks at a historical period in which new Americans tried to navigate complex issues unaddressed in the Constitution. (Photography by Lloyd Degrane)

The Constitution is a short read. The rest is history.

By
Author
Lucas McGranahan
|
The University of Chicago Magazine
—
Spring/18

“There isn’t an optimal distribution of federal versus state power,” says constitutional scholar Alison LaCroix, the Robert Newton Reid Professor of Law and associate member of the Department of History. “I mean, there might be an optimal one, but you can’t find it in the Constitution.”

LaCroix is among those who view constitutional law as an ongoing negotiation between the text and evolving historical circumstances. The meaning of the Constitution, in this view, was not settled with the document’s ratification in 1788, nor with any subsequent amendment. The Constitution is a conversation.

LaCroix’s new book The Interbellum Constitution: Union, Commerce, and Slavery from the Long Founding Moment to the Civil War (Yale University Press, forthcoming), supported by a fellowship from the National Endowment for the Humanities, will examine the interbellum—“between the wars”—period from 1812 to 1861. According to LaCroix, these years, written off by many as a lull between the founding and Reconstruction, were in fact a time of great constitutional meaning making.

The prevailing feeling among judges, politicians, and ordinary people of the generation after the founders was that the concrete of America had not yet set. These early citizens viewed themselves as participating in an ongoing founding process that extended beyond the Philadelphia Convention. In this spirit, many believed that the Constitution would be relatively easy to build out with further amendments—12 of which had already been ratified by 1804. The country was a work in progress.

The amendment process proved burdensome, however, and the Constitution would not be modified once between 1805 and the 1865 abolition of slavery. All the while, debates raged over the regulation of inter- and intrastate commerce, jurisdiction over contested bodies of water, and states’ rights and obligations regarding fugitive slaves—issues on which the Constitution was silent. Even though 19th-century Americans “tended to worship the founders,” LaCroix says, “they also felt like they were being left high and dry.”

They were, in part, grappling with questions of federalism, or the proper relationship between the states and the central government. This is familiar ground for LaCroix, whose first book, The Ideological Origins of American Federalism (Harvard University Press, 2010), traced American federalism to the colonists’ vision of dividing powers between the British imperial government and an internal colonial one. The two governments could coexist, it was thought, each governing different aspects of colonial life.

Although such a system had historical precedent, as in the distributed power centers of the Holy Roman Empire, British politicians and theorists such as William Blackstone strongly rejected the notion that a single polity could be ruled by multiple authorities at once. In the end, of course, the colonists created their own federation that excluded the imperial power.

American federalism poses a set of challenges that are familiar to court watchers today. LaCroix’s point, however, is that our understanding of federalism has changed over time. Prior to the Civil War, Americans assumed the legitimacy of what is now termed “cooperative federalism”—federal projects relying on states for execution—as long as Congress was acting within its enumerated powers and in the name of the states. In contrast, modern constitutional doctrine tends to view the states and federal government as locked in an adversarial relationship, as in the Supreme Court’s 2012 ruling that the Affordable Care Act was unduly coercive in requiring states to expand Medicaid or lose all federal funds for the program.

For LaCroix, the value of history lies in understanding such differences. “In other words,” she wrote in a 2009 essay, “it is alienness, not sameness, that makes the study of ideas valuable.”

In the classroom, for instance, LaCroix emphasizes that doctrine is not set in stone. This includes her experience coteaching the University’s first class on law and linguistics with Jason Merchant, the Lorna Puttkammer Straus Professor in the Department of Linguistics and the College, in winter 2014. While the Supreme Court has made a habit of appealing to the authority of 18th-century dictionaries to fix the meaning of terms, LaCroix and Merchant are now drawing on advances in computational linguistics to detect historical shifts in meaning across vast bodies of text—an effort supported by the Neubauer Collegium for Culture and Society. LaCroix hopes the project will allow linguistics to play an “enriching, rather than simplifying” role in legal disputes.

The United States Constitution is a short read, as constitutions go. The text outlines a structure of government, but the precise contours of that structure depend upon the exigencies of history and the vagaries of language. This makes the Constitution anything but static, even as the words on parchment remain the same. As LaCroix puts it, paraphrasing her colleague Gerald Rosenberg, associate professor of political science, “there are wrong answers in constitutional law and there are right answers, and the right answers change over time.”