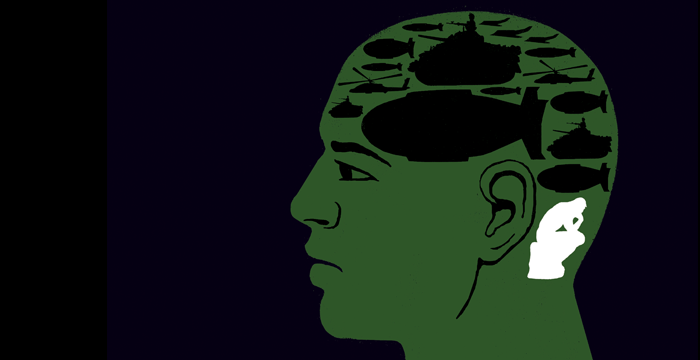 How does critical thinking play out in the military?

At Alumni Weekend, UChicago’s Military Affinity Group and the Committee for Veterans Affairs organized a panel on “Critical Thinking in the Armed Forces: A Chicago Perspective.” Moderated by Marine Corps veteran and UChicago police commander Fountain Walker, the panel included Katrina Johnson, JD’06, who served as a brigade judge advocate in northwest Iraq and now works at a private firm in Washington; Tobias Switzer, SB’99, an Air Force major who flew helicopters in support of counterinsurgency and counterterrorism operations in Iraq and now advises foreign special operations aviation units; and Brian Penoyer, AB’88, a 22-year Coast Guard captain and acting chief of congressional and governmental affairs. He’s also a military fellow at the Center for Strategic and International Studies.

Fountain Walker How does an officer differentiate between the military mission and his or her moral compass?

Katrina Johnson I was a legal adviser, so I didn’t get to make my own decisions. There’s legal advice that we give called “legal but stupid.” My brigade commander ... would say, “Katrina, we have a mission, we need to make it happen, you need to get to yes.” So I had to find a legal way to get to yes. ... But you think about the legal but stupid. And what that means is, “Yes, sir, absolutely we can do it, I can find a way for us to meet the mission requirements, but it might not be the smartest thing.” In today’s environment, commanders have to think about the CNN factor: if this ends up on CNN, how is this going to make us look as the United States, as the Army, as a commander. I couldn’t make that decision for him or her.

Sometimes, especially with the younger commanders, the company commanders on the ground who just want to get the mission done, they are so focused, they’re in the weeds. Sometimes it was my job to reel them back a bit and say, “If this ends up on the front page of the news, how’s it going to make us look? How’s it going to make you look?” And it happens; people make bad decisions all the time. I don’t think it’s necessarily because they want to, but they’re in the moment, in the mission, trying to do the best that they can. In our world today with Twitter and Facebook and news flying everywhere, commanders have to look at that perspective as well.

Tobias Switzer We were in Iraq, in the middle of the insurgency. Things were not going well—a lot of pressure, trying to capture every bad guy that we could in the region. We had just made a public statement that we were not going to enter mosques. There are very good reasons, like this is going to upset the population; yes, we could catch one guy one day, but then it’s going to upset the whole town and we’ll never have their support again. And that next day we had slated a raid on a mosque in the daytime. And we were all standing there scratching our heads, holding up our newspapers. Thankfully that mission ended up getting canceled. But those kinds of things [happen] all the time. You have a piece of intelligence, you want to go get that bad guy, but you sometimes have to throw it back and realize there’s a bigger picture, there are second-order effects that could end up hurting your mission in the long run.

FW What is the military’s role in shaping foreign policy? Why does the military conduct foreign affairs and security assistance?

KJ I believe that foreign policy should be shaping the military, not the opposite. We have come into problems when that happens: in Afghanistan the military was shaping foreign policy. Then General Petraeus published The US Army/Marine Corps Counterinsurgency Field Manual (University of Chicago Press, 2007). This manual changed how we conducted ourselves in Afghanistan. We were doing it all wrong, using this big force of military power to try to shape change. The field manual basically says the opposite—that success in counterinsurgency is gained by protecting the populace, not our actual force. It changed the way we did things, in that we’re allowing the populace in Afghanistan to continue to do what they needed to do—we couldn’t shape them.

TS As a security assistance guy and doing foreign internal defense, I have a slightly different take. I agree wholeheartedly [that] our direction comes from the top down: president, secretary of defense, secretary of state, etc. However, the military has a huge role to play in our foreign affairs, and we interact with our military counterparts all the time. It’s important that not just our military advisers, not just our admirals and generals, but everybody has a sense of cultural awareness [so] that when I’m interacting with my partners in another country, I know how to respect them, their culture. What we’re seeking is a partnership in a lot of places [so that] we have an ally to count on in a future war. We’re very interested in developing those nations’ capabilities so that, in a resource-constrained environment in the future, the burden doesn’t have to fall on the United States at all times.  ...

So you have these captains and sergeants on the ground in the jungles, hiking around with these guys or teaching them how to fly their helicopters. You’re counting on this person who is 25, 35 years old not to create an international incident by insulting somebody or treating them like an American; you’re counting on them having cultural awareness. So I agree our policy comes from the top down and we execute it, but what the military does affects perceptions of Americans abroad and our foreign policy as well.

Brian Penoyer [In late May CNN interviewed Joint Chiefs of Staff chairman General Martin E. Dempsey about Syria.] They were asking more or less what the United States could or should do militarily in Syria. Dempsey’s response was, I thought, directly to this question. He said, “We have a variety of options, and my job is to provide the president with options. It’s not my job to decide what the policy of the United States is.” It got me to thinking, in typical U of C fashion, linked to a book I was reading about the initiation of the war in the Pacific during World War II (At Dawn We Slept: The Untold Story of Pearl Harbor, McGraw Hill, 1981). We know of a society in which the military determined national policy: Japan prior to World War II. That is not the United States’s system. A more interesting question is, “What are the qualities of those options that you present to the president?” And to Katrina’s earlier point, are there legal but stupid, militarily executable but stupid courses of action that you present to the president? What options do you put in front of the president? That’s a tough question.

FW This question is for Katrina: describe your experience as a female officer in Iraq dealing with fellow officers and with local judges and politicians.

KJ In Iraq I was the only female on the staff … and I was like 15 years younger than everyone. It was difficult at first, especially for me—I’m bubbly, I’m blond—so it’s going into a room full of big men who are pretty serious, and I tend to joke around a lot. But I am extremely fast and athletic, and once I beat my battalion commander in a run, he listened to me a little bit closer.  ...

One funny story is, I got permission to build a courthouse in the town of Tal Afar. … We had a big meeting with the mayor and this big political guy. They called him the Tony Soprano of Nineveh. He basically ran the whole part of the country because he had the money. They’re all in mud huts and we’re trying to have a conversation. … They wouldn’t shake my hand; they stood pretty far away from me. And the Tony Soprano of Nineveh kept asking my interpreter questions. My interpreter kept talking back, and I say, “What? Tell me what’s going on.” He says, “You don’t want to know.’ I said, “Tell me what’s going on.” He said, “He’s trying to buy you.” I was offered 60 goats, which is a pretty good price, as it turns out. … But that was the end of the meeting. I couldn’t get any further with them when he was trying to bargain with my interpreter over the amount of goats I was worth. And so it ended. I had the sheet of paper that said the head chief judge in Iraq wants to build you a courthouse, let’s talk about this. It was a very big barrier for me.

The panelists note that they are stating their own opinions and not official positions of the US government or military services.