Hyde Park’s feline population gets some much-needed care and attention from a group of dedicated volunteers.

Tucked away on South Wabash by 63rd Street is a nondescript low-slung building. The only indication of what’s behind its walls is a small sign reading Animal Welfare League in friendly red-and-blue letters. Since 1935 this building has been home to the humane society, sheltering strays and surrendered animals—from cats and dogs to rabbits and rats to iguanas and turtles. While the Animal Welfare League’s Chicago Ridge location is an adoption facility open to the public, the Wabash location is an intake-only facility, taking in strays and receiving animals surrendered by people no longer willing or able to take care of them. The only way out for these animals is to be found by their guardians, rescued by an approved animal shelter, or, sadly, euthanized. 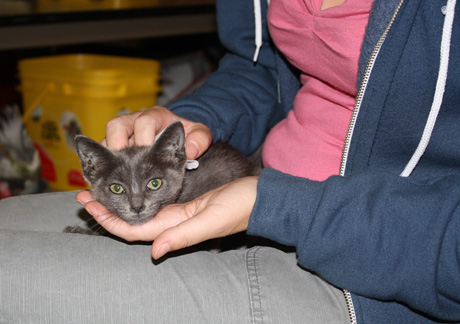 A kitten at the Animal Welfare League gets some time as a lap cat.

One Friday each month, a small band of Hyde Park cat lovers spends the afternoon providing the cats there with much-needed play, grooming, and affection in the hopes that they’ll be better candidates for adoption. They are volunteers from Hyde Park Cats, an animal-rescue group started in 2008 by Divinity School colleagues Terren Wein and Mary Jean Kraybill, AM’81. Originally formed to care for a cat colony south of the Midway by implementing a trap, neuter, and release strategy, Hyde Park Cats currently cares for four colonies throughout the neighborhood, feeding the animals and monitoring their health, as well as trapping and neutering as many street cats as possible. 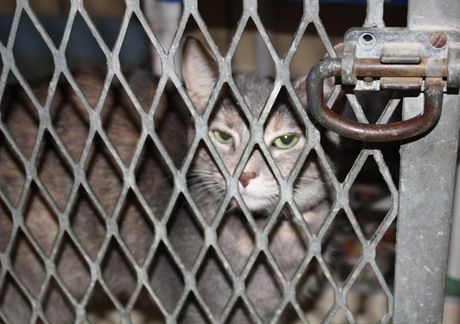 The attention provided by volunteers helps cats deal with the stress of being in a shelter.

While many of these cats are feral and avoid human contact, others wandering around Hyde Park are actually “friendlies,” house cats likely dumped by people who mistakenly believe they will be able to fend for themselves. In order to help these friendlies, Hyde Park Cats has expanded over the past four years. A core group of ten to 12 volunteers manages a network of 15 to 20 foster homes, coordinates veterinary visits, and processes adoptions. They also maintain a blog and a Facebook page and hang posters advertising the organization throughout the community.

On one September Friday, five volunteers brushed and played their way through the Animal Welfare League until all of the cats had enjoyed some individual attention. One of the volunteers, Leslie Sisco, a Hyde Park resident since 1993, organizes the monthly outings. Sisco feels Hyde Park Cats is an asset to the community: “There are not as many stray cats roaming the neighborhood, and the cats are being looked after, where in many other neighborhoods that is not the case.” 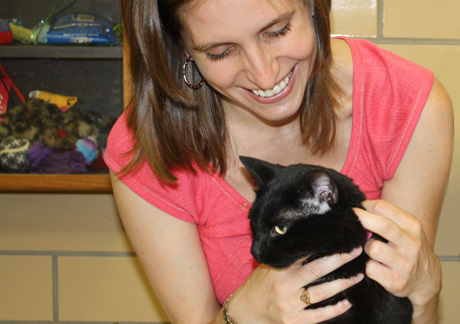 Another of the five, Kimberly Rios, associate professor of social psychology, began volunteering with Hyde Park Cats shortly after arriving on campus in 2010. In addition to being the volunteer and alumni coordinator, she also offers “Zumba for Kitties” classes at the Nichols Park Field House on 53rd Street, giving all the profits to Hyde Park Cats. “I figured it would be the perfect opportunity to combine two things I love,” she says.

As Rios, Sisco, and the other volunteers circulate through the Animal Welfare League, providing whatever care each particular cat needs, it’s surprising to find that these cats—castaways and strays—want human companionship. In spite of being abandoned by their original guardians, they still seek people’s attention—playing, cuddling, or even consenting to a thorough brushing. 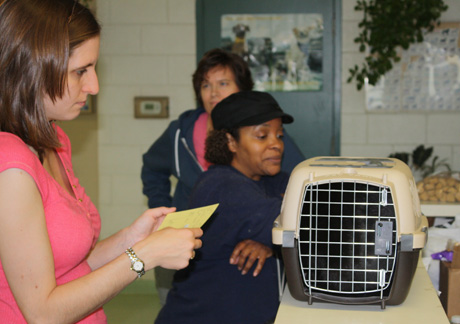 Randy patiently waits while Rios gets things in order for his departure.

Preferences are also revealed. Sisco has a soft spot for black-and-white cats, and Rios—after learning they’re less likely to be adopted—has a penchant for black cats. On this day, she has her eye on an athletic one who’s been at the Animal Welfare League for nearly three months. Named Randy by the volunteers, he’s three or four years old with a sleek coat and a confident, playful nature. After mulling it over and getting approval, it’s confirmed—Randy is a lucky cat today. He’ll be going to Rios’s home as a foster cat until someone decides to give him a forever home, the ultimate goal for every cat in the shelter.