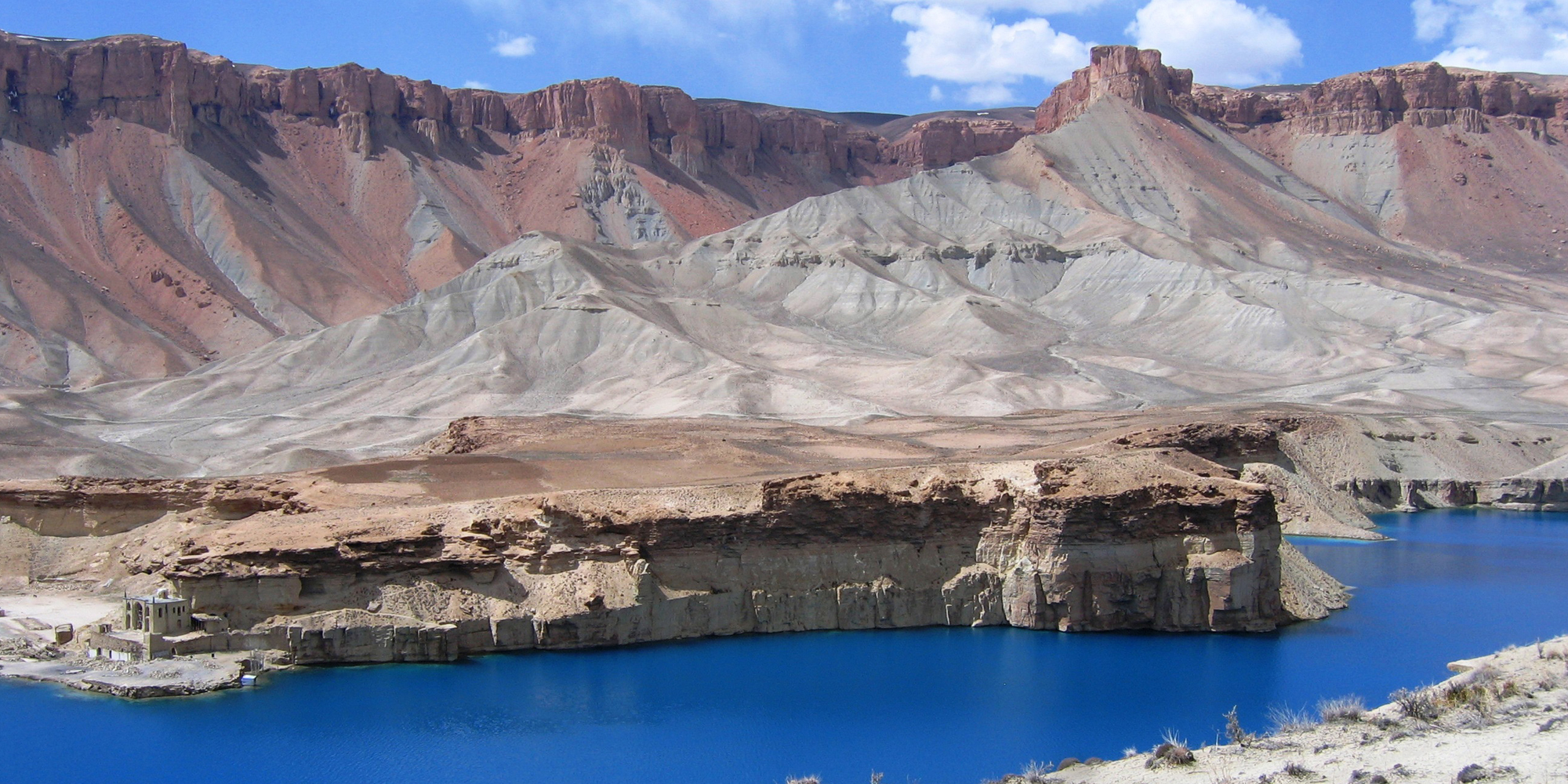 Leopards, tigers, and bears were just the beginning. In 2006 conservationist Alex Dehgan, SM’03, PhD’03, ventured by horse, donkey, and yak to some of Afghanistan’s most remote landscapes in search of elusive war zone wildlife. Dehgan and his team tracked ecologically crucial keystone species through grasslands, valleys, and mountains rarely glimpsed in American media coverage of the former Soviet-controlled country, the scene of nearly nonstop conflict since 1978. Their goal was to figure out how to protect the surviving fauna.

From 2006 to 2007, in the midst of Operation Enduring Freedom, Dehgan led the Wildlife Conservation Society’s Afghanistan program. Through WCS, he helped create Afghanistan’s first protected area, Band-e-Amir National Park, and laid the groundwork for a second, Wakhan National Park. Together these nature reserves protect over 70 percent of the country’s snow leopard population.

Band-e-Amir attracted around 25,000 visitors the first year after it opened in 2009, and continues to provide an animal sanctuary and a place where Afghans can enjoy outdoor activities. “The sheer number of Afghans that actually went ... is really the most powerful thing,” Dehgan says, “because it means we created something Afghans actually wanted.”

Dehgan chronicles his efforts in The Snow Leopard Project: And Other Adventures in Warzone Conservation (PublicAffairs, 2019). Now the CEO and cofounder of Conservation X Labs, Dehgan has shifted his focus to the private sector, developing open-market technologies to tackle the underlying drivers of extinction. This interview has been edited and condensed.

You call Afghanistan a biological Silk Road. What did you learn about the health of Afghanistan’s wildlife, and how did you go about it?

Afghanistan has been this amazing mixing ground and meeting place of wildlife where three major biomes come together in a single country. You have brown bears from Europe, tigers from Indo-Malaysia, hyenas from Africa. You have species specific to the region, like snow leopards and the markhor, a goat that looks like a unicorn except with two spiral horns instead of one. Great north–south bird migrations from Africa into the Arctic pass through Afghanistan, channeled by the Himalayas and the Wakhan Valley. So it serves as an important transition point.

The international WCS team, which was just under 90 percent Afghan, included about 50 staff and 25 affiliated scientists and conservationists. We wanted to find out what was left after 30 years of war and how to direct our conservation efforts. What effect did conflict have on biodiversity? What areas do we still need to protect? What baselines would we be starting from?

We used things like sensor-activated cameras. We looked at scats, literally the feces of carnivores, and hair samples for evidence of species’ presence and perhaps a degree of insight into their population genetics and population size. We were essentially verifying the existence of species that hadn’t been seen for 50 or more years.

We found many more species than we had expected. In the case of snow leopards, we thought there were only 70 to 100 of them left in Afghanistan. The evidence suggests that there are over 200 in just one region. There may be more. So there’s an even greater imperative for their protection than we ever thought.

Why did you choose to study evolutionary biology at the University of Chicago, especially after earning a law degree?

While I was in New York clerking for the chief judge of the US Court of International Trade, the WCS held a lecture series with the world’s best conservation biologists in honor of its 100th anniversary. They so inspired me that I decided to return to my passion for understanding the drivers and behaviors of extinction—work I’m still doing today.

UChicago had the best program in the country for studying the behavior of extinction, the focus of my PhD. I
wanted to go to a school that created theory, not just applied it, so I could understand the assumptions behind models that were being made. I also appreciated the intensive life of the mind the University was known for.

It wasn’t easy to go back to graduate school after working on significant national and international cases, including multiple cases that went to the Supreme Court.

What was it like to work as a scientist in a conflict area?

The biggest challenge was obviously the security situation. Land mines were an enormous problem. Afghanistan was the third most heavily land-mined country in the entire world. I probably walked into a minefield chasing after some birds I was trying to document. People we knew were kidnapped. Being in the wrong place at the wrong time was a real issue—if you were near a car carrying an improvised explosive device, or if there was an attack. There were explosions going off in the city, in government buildings, in the places where we worked all the time.

It sounds surprising, but Afghanistan was the easiest place I’d ever done conservation. People intuitively and inherently understand the link between their own security and the environment. This whole generation grew up as refugees—Afghans in Iran, Afghans in Dubai, Afghans in Pakistan—and those individuals were rebuilding an identity they already had in association with the incredible wildlife in Afghanistan. It was a point of pride that they had this environment and these species that were worthy of global consideration, attention, and protection.

The Afghan people had been visiting the Band-e-Amir National Park location for hundreds of years. It’s near other important cultural sites, like the Buddhas of Bamiyan, and lies near one of the Silk Road routes. The second most important Shia shrine in the country also sits on the edges of the park’s most important lakes. Local communities had a number of reasons for wanting to protect the site, from geological and biological to historical, cultural, and religious.

With so many development priorities after decades of war in Afghanistan, why a national park?

Conservation is fundamentally tied to the outcomes we expect to see in development. When the environment fails, so does everything else. So does food security. When grasslands fail, we lose pollinators necessary to grow the food. The soil becomes less rich with microbial diversity. The very things that sustain domestic populations also sustain wild populations.

Wakhan National Park, in the Himalayas, was important because environmental management is critical to the survival of the nomadic Kyrgyz tribes and the Wakhi, who inhabit the landscape. The same overgrazing that threatened their livestock was also undermining the survival of the spectacular Marco Polo sheep.

The environment itself can provide a tool to build governance and democracy as well as diplomacy between countries. We had elections for a community conservation council that involved all of the villages along the rivers surrounding Band-e-Amir National Park. The national, provincial, and local governments all participated. Many jobs were created for the protection of this wildlife.

We didn’t want it to be a Western park in Afghanistan. We wanted it to be a park for Afghanistan. National parks in the United States have always had some type of local governance, but land tenure is much better established here. Land ownership was an important part of our constitution. In many other countries, there are informal systems of land tenure that haven’t been codified into laws or registered through an administrative agency. Many past conservation efforts have been almost neocolonial, running roughshod over traditional interests in land.

By building the governance structures that helped improve how Afghans manage natural resources in the park, we then could actually help establish that ownership, help set the direction, and help build the leadership for the future of conservation in the country.

Now that you’ve started your own company, how do you see the roles of the public and private sectors in environmental conservation?

While government is a very powerful entity for addressing the challenges we face, the political climate prioritizes shorter-term interests over the long-term nature of environmental conservation. Because of the fickle nature of government, you can have a rapid shift in policy through executive order.

One example is the Paris Agreement on climate change, which the Trump administration has pulled out of. If you look at the data, the most effective thing we can do for climate change is address cooling technology, which is based on vapor compression—super old, not very efficient. We have billions of people moving into the middle class, in places that are only getting hotter, who will demand refrigeration and air-conditioning. So Conservation X Labs—along with the Rocky Mountain Institute and the Indian government—is running an international competition to reinvent the underlying air-conditioning technology, aiming at a four- or five-fold increase in efficiency as a way of directly meeting the needs outlined in the Paris Agreement.

How do you make things sustainable in an unreliable environment? How do you find new solutions? How do we use the power of innovation? Government plays a huge role, through the funding of science, through laws and policies. But at the moment, in the absence of government action, we are stepping up.