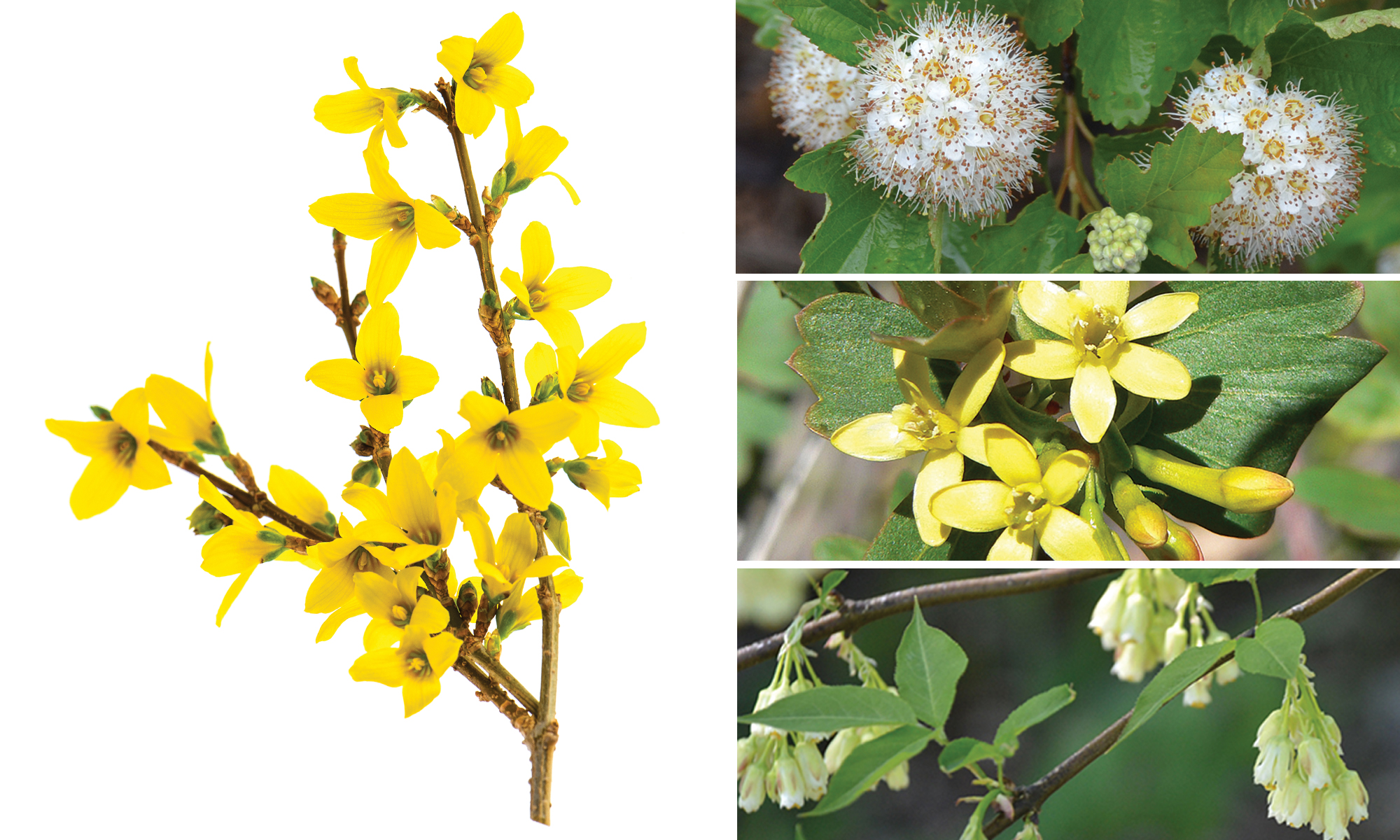 Instead of planting nonnative forsythia (above left), which has little to recommend it beyond a few weeks of yellow flowers, Charlotte Adelman, AB’59, JD’62, recommends (right, from top) ninebark, clove currant, or American bladdernut. (Photography by LiliGraphie (left); photos courtesy Charlotte Adelman)

Rip out your lawn

“The monoculture lawn,” writes Charlotte Adelman in The Midwestern Native Garden (Ohio University Press, 2011), “is of virtually no value to wildlife. The vast space taken up by lawn in the midwestern landscape could be used more productively.” After years of arguing in front of the bench, Adelman, AB’59, JD’62, now argues for gardeners to replace the imported plants that fill suburban gardens with species that thrive here naturally.

Along with Midwestern Native Shrubs and Trees (Ohio University Press, 2016), The Midwestern Native Garden, written by Adelman with photography and editorial assistance from her husband, Bernard Schwartz, offers native alternatives to nonnative species.

Take Kentucky bluegrass, a common component of the American lawn. “People use lawns in ways they never should have been used,” Adelman says, citing their original “overtones of status and conformity” to show the homeowner could afford to use a large plot of land for something other than food or cash crops. Despite its name, Kentucky bluegrass is native to Europe and northern Asia, in areas where it rains year-round. As most homeowners and lawn services can tell you, maintaining a lush green carpet in the Midwest or other areas with dry summers requires almost daily watering in addition to “cutting, fertilizing, weeding, edging, reseeding, and herbicide applications.” Also, she says, grass pollen is allergenic. Adelman offers alternatives in the book, including blue grama, also known as grama grass; buffalograss; and various sedges, rushes, and ground covers, some of which can be mowed and none of which require the amount of service Kentucky bluegrass does.

Adelman has spent a career fighting opponents equally as formidable as Kentucky bluegrass and periwinkle vines.

After graduating as one of four women in her Law School class, numerous employers—including the US attorney’s office—told her they didn’t hire women. Two years before the passage of the Civil Rights Act, it was a perfectly legal policy. She practiced privately, struggling to get clients. “My own parents sent their cases to my brother-in-law [Arthur Solomon, AB’60, JD’61],” Adelman said.

She and several other women lawyers offered free consultations at the downtown YWCA, which occasionally yielded a paying case. Gradually she built up a practice, largely based on family law.

She also worked with the American Civil Liberties Union and the National Organization for Women on a few cases, and testified before the Illinois Fair Employment Practices Commission on guidelines for sex discrimination. Noting that many of her clients had difficulty getting their ex-husbands to pay child support, Adelman helped draft legislation for a collection law, which passed in 1980.

She has served as president of the Women’s Bar Association of Illinois and is currently the group’s historian/archivist.

As she approached retirement in 1999, Adelman thought about her garden in suburban Wilmette, Illinois. She had always loved nature and wildlife, dating back to her childhood in Rogers Park. In her family’s one-bedroom apartment half a block from Lake Michigan, she grew up falling asleep “to the gentle—and much-missed—sounds of waves lapping the shore.” Before her senior year, Adelman’s family moved to nearby Lincolnwood, Illinois, still prairie in those days, which she remembers for the “magnificent” cottonwood trees and bobwhite quail in the backyard.

But over the years, Adelman noticed her and her neighbors’ lawns and gardens were strangely devoid of birds, butterflies, and the like—though they did need defending from rabbits and deer.

When she found a small planting of native flowers, she saw bees and butterflies gathering nectar from the black-eyed Susans and birds eating seeds from purple coneflowers.

She began to do research, discovering that the nonnative plants she’d thought of as garden staples required more water than native plants, which have adapted to the available water in their ecosystems. Nonnative plants often require herbicides to avoid being overcome by native plants, and pesticides to keep insects from devouring them. In contrast, native plants have evolved to attract and coexist with local fauna.

Adelman, who says, “I like to do projects,” had found one for her retirement. She and Schwartz destroyed their backyard lawn and replaced it with a prairie. They worked with the Wilmette Park District to create what became the two-acre Centennial Prairie Garden. They also successfully lobbied the village and library to stop applying pesticides.

The books are an effort to proselytize to a wider audience, conditioned over the years to believe “it’s better to have an English garden than a boring American garden.” She admits that nonnative flowers are lovely, but they won’t “help the animals we love. We all want beauty, but not so specific that it excludes things that are so important.”

Availability is the biggest challenge. According to Adelman, 80 percent of the plants at retail garden centers are nonnative. When ordering plants for the Wilmette prairie, she relied on a few retailers in Wisconsin and online sources. Some parks and garden clubs also have local plant sales.

In her books, Adelman takes apart arguments against native plants. For those concerned about the “weedy” or “disorganized” look, she argues in Midwestern Native Shrubs and Trees, “Many native species resemble or look exactly like nonnative species and share cultivation requirements.”

Adelman believes she is on the right side of history. “Adjusting and accepting the inevitable presence of vistas of prairie, woodland, wetland, and savanna,” she says, “will be the pleasant fate of urban and suburban human populations, as well as of local wildlife, including birds, butterflies and moths, bees, and other pollinators.”

For a list of native substitutes for common nonnative plants, see “How to Make Your Yard More Like a Prairie.”