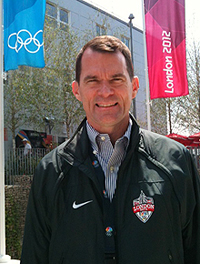 Brian Fahey, AB’82, is a freelance sports-television associate director and writer who’s won seven National Sports Emmy Awards. He’s worked live events, including the Super Bowl, Kentucky Derby, and Wimbledon. This is his sixth straight Olympic Games for NBC; he was also at the 1988 Calgary games as an ABC intern. Fahey arrived in London on July 22 and took a moment out of his hectic schedule to send the Magazine a short note. Hope you have a brilliant time, Brian. “Let the Games begin! Friday night I’ll be one of 2,700 NBC employees here in London (along with another 700 back in New York) who will begin work on televising 17 days of coverage of the 2012 Summer Olympics back to the US. I’ll be working on the Opening Ceremonies first, and then the rest of the way I will work on the NBC daytime show as an associate director, playing back taped segments and other elements for air. It’ll be long hours, and a ton of work, but working an Olympics remains a great privilege."
Law, Policy & Society
Olympics