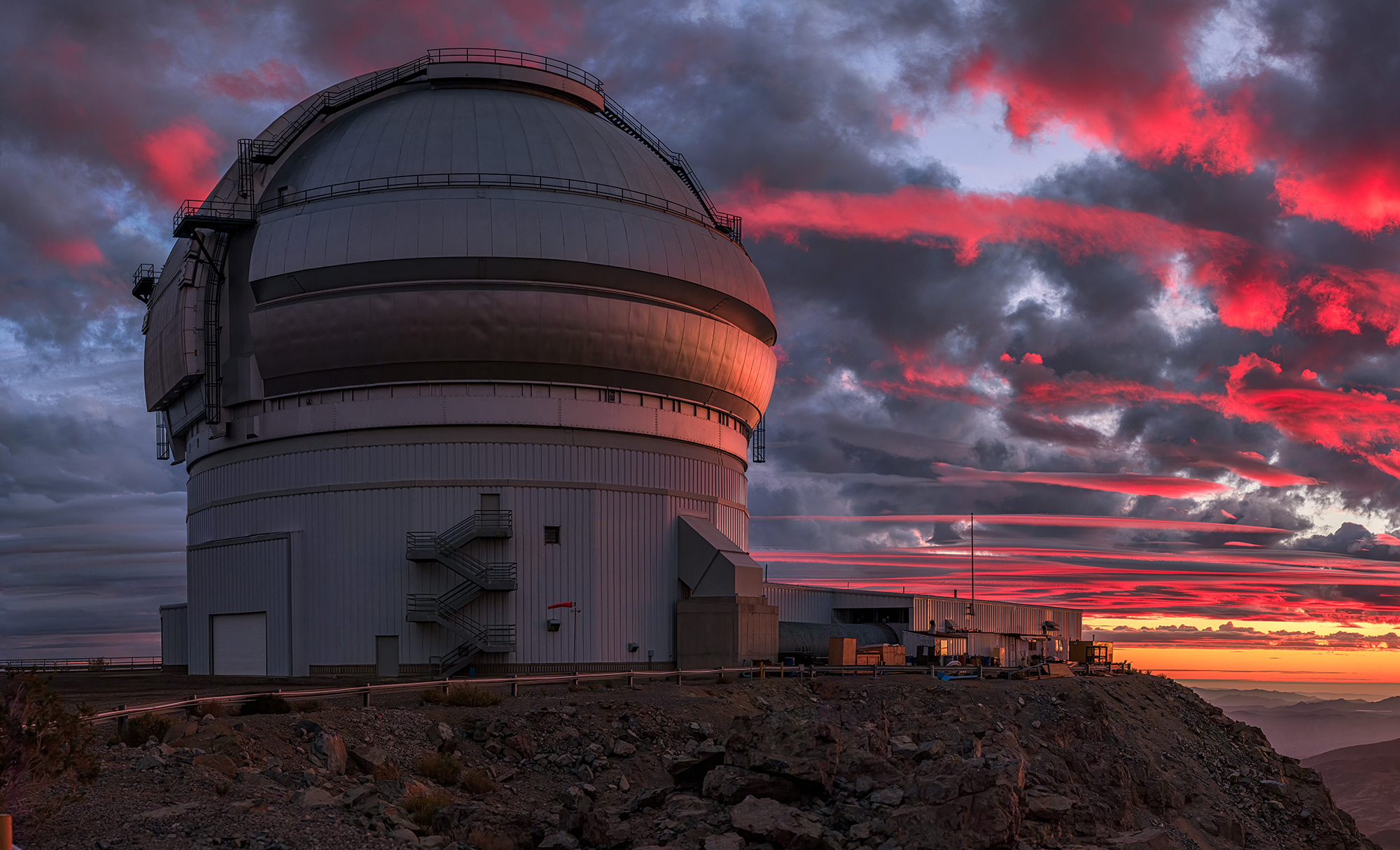 Using Gemini South, a telescope in the Chilean Andes, researchers including UChicago’s Jacob Bean were able to measure water and carbon monoxide in the atmosphere of a planet 340 light-years away. (International Gemini Observatory/NOIRLab/NSF/AURA/B. Tafreshi)

All the life we cannot see

A new technique unlocks the mysteries of distant exoplanets.

Some 340 light-years away sits a planet called WASP-77Ab, thought to be similar to Jupiter but roughly 20 times hotter. Until recently scientists knew relatively little about this distant neighbor, discovered in 2012—just the basics, such as its approximate age, mass, and temperature. Now an international team of researchers, including UChicago’s Jacob Bean, has found a way to measure the water and carbon monoxide in its atmosphere.

This is the first time scientists have been able to measure the relative abundances of molecules in the atmosphere of such a distant planet, and they hope the technique will be a significant leap forward for our understanding of planets in other solar systems—including how they form and where to look for signs of life.

“This opens up a whole new window into planetary atmospheres,” says Bean, a professor of astronomy and astrophysics. “Previously we could tell whether there were certain molecules, but not how many, and that makes a huge difference. It’s like being able to see the entire iceberg, not just what’s above water.”

The team, led by Michael Line of Arizona State University, published its findings in the journal Nature last fall.

To date scientists have discovered thousands of planets outside our solar system. These so-called exoplanets are tricky to spot because they’re incredibly far away and hard to see next to the blinding light of their stars. It’s only thanks to better telescopes and techniques in the past two decades that we’ve been able to find them at all, and the exoplanet field is still evolving rapidly.

Scientists have limited ways to tease out clues about what these planets actually look like because they’re so faint. One is to check for what molecules exist in their atmospheres. That can hint at what might be on the planet’s surface, how the planet formed, and even what might live there.

For example, alien astronomers would probably be able to detect life on Earth by the amount of oxygen in our atmosphere, which you wouldn’t expect to see based on the planet’s geologic makeup—because the oxygen was put there by plants.

Previously scientists could use instruments like the Hubble Space Telescope to get a preliminary sense of a planet’s atmosphere and whether or not it contains elements like oxygen or carbon, but they didn’t know the abundance of these elements. Without that information, it’s hard to know how the planet formed or what it looks like now.

So the team decided to find out if they could use recent advances in data analysis techniques to determine the abundances of the primary molecules that contain carbon or oxygen atoms.

They selected WASP-77Ab, a “hot Jupiter” whose size and mass make it a useful laboratory for measuring atmospheric gases and testing planet formation theories.

Early in the project, the research team made an unusual choice: they used a ground-based telescope instead of a space-based telescope such as Hubble. There are many more ground-based telescopes, but until now it’s been hard to use them for measuring atmospheric properties on other planets because Earth’s own atmosphere gets in the way and scrambles the readings. The team hoped to use recent breakthroughs in signal processing to pick out what they needed.

They turned to Gemini South, an 8.1-meter-diameter telescope in the Chilean Andes, operated by the National Science Foundation’s National Optical-Infrared Astronomy Research Laboratory. At the telescope, using an instrument called the Immersion Grating Infrared Spectrometer, the team observed the thermal glow of the exoplanet as it orbited its host star.

From the resulting data, they were able to get clear measurements of both water and carbon monoxide in the atmosphere of WASP-77Ab based on the wavelengths of light they observed from the planet. The readings were close to what they expected based on simulations and models, but with some subtle differences that will take time to analyze, the scientists say.

They plan to confirm the readings by comparing them against data from the James Webb Space Telescope, the powerful new successor to the Hubble Space Telescope that NASA launched on Christmas Day 2021.

If their findings are confirmed, the team hopes the new method used in this study will help them going forward, offering complementary information that would be difficult for even more powerful telescopes like Webb to get.

For example, they may be able to measure the abundances of isotopes in exoplanet atmospheres, “which is a very powerful source of information,” Bean says. “Different processes and conditions in planetary systems will leave fingerprints in the isotopes—it could tell us a lot about how exoplanets form and evolve.”

Next, Line and the team will repeat this analysis and build up a library of atmospheric measurements from at least 15 more planets. Study coauthor Megan Mansfield, SM’18, PhD’21, now with the University of Arizona, is working on a larger survey of planets with the same technique.

“If we can do this with today’s technology, think about what we will be able to do with the up-and-coming telescopes like the Giant Magellan Telescope,” says Line. “It is a real possibility that we can use this same method by the end of this decade to sniff out potential signatures of life.”