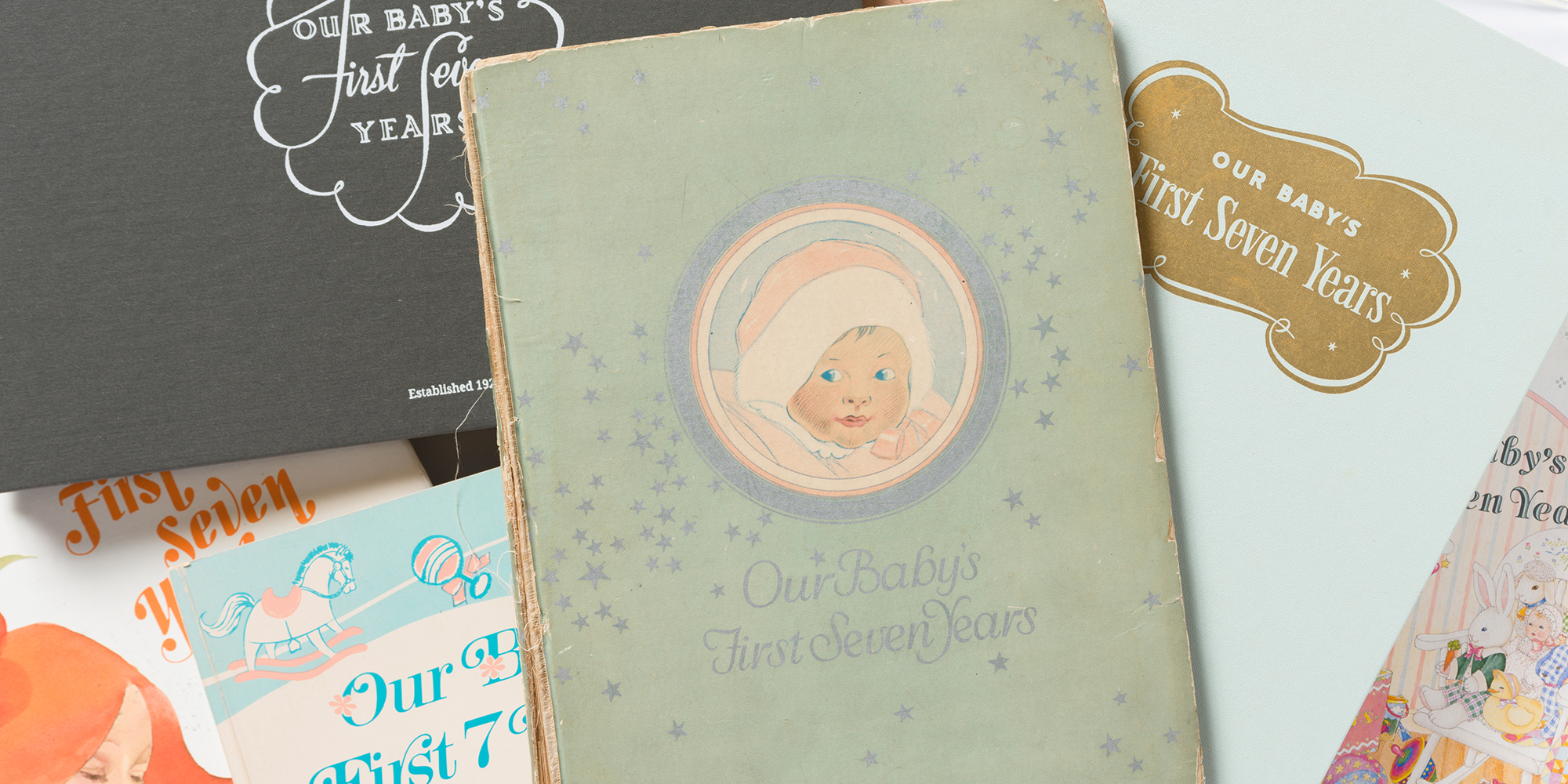 (All photography by Nathan Keay)

Since 1928, families have documented childhood landmarks in a book rich with history.

Today, many infant milestones, from first steps to first words, are captured on smartphones and shared with friends and family in minutes.

But before the era of FaceTiming with Grandma, there was Our Baby’s First Seven Years, a baby book created by Mothers’ Aid of Chicago Lying-In Hospital and currently produced by the Chicago Lying-In Hospital board of directors. Part keepsake volume and part medical advice, Our Baby’s First Seven Years continues to give parents a lasting way to track the growth and development of their newborn, year by year. It’s still in production today, nearly a century after it was first published.

The book “provides a record you can refer to for the rest of a child’s life,” says Gail McClain, a board member who worked on the eighth edition, released in 2013.

The idea for Our Baby’s First Seven Years was birthed by Joseph Bolivar DeLee, the reformist founder of the Chicago Lying-In Hospital and a pioneer in the field of obstetrics. When DeLee began his career at Northwestern’s medical school in 1888, he grew appalled by what he deemed “unclean” and “ignorant” birthing practices. Maternal mortality in the United States was alarmingly high at the time—one woman died for every 154 live births. Many of these lives were claimed by so-called childbed fever, a common and devastating postpartum infection.

DeLee advocated for a variety of practices he believed would protect the safety of mothers and infants. He emphasized a clean environment and the use of sterile sheets, gloves, mouth cloths, and gowns, even for natural deliveries, and, when necessary, the use of forceps.

Of particular concern to DeLee were mothers living in poverty. He hoped to create a facility specifically designed to help these women give birth safely and free of charge. In 1895 he opened the Chicago Lying-In Hospital and Dispensary at the corner of Maxwell Street and Newberry Avenue, near Hull House. The hospital also offered training to doctors, medical students, and nurses eager to learn about DeLee’s ideas.

As labor and delivery grew safer in the early 20th century, baby books grew in popularity. Wealthy families in particular bought the keepsake volumes to store photographs of the newborn and to record lists of gifts and congratulations received. DeLee believed they could serve a more serious purpose.

A baby book, he wrote in the foreword to the first edition of Our Baby’s First Seven Years, “should have all the delicate and lovely sentiments attaching to the birth and beginnings of life of the new individual, but it should have more than this. It should be a record showing the gradual physical and spiritual development of the body and soul. … A study of 1000 baby books such as this, if filled out carefully, will give valuable information in every department of medicine.” Then, as now, proceeds from the book went toward research and patient care.

Each edition of Our Baby’s First Seven Years has changed to reflect new knowledge about child development—and with the times. Gone are outdated descriptions of temperament (a child might be phlegmatic, sanguine, choleric, or melancholic, according to the first edition) and warnings to correct habits such as finger sucking and nose rubbing. A section once titled “Mother’s Notes” became “Parents’ Notes” in the 1980s.

While inventories of physical and behavioral milestones are a constant, not everything stood the test of time. Several early editions included a page, “Questions Pertaining to Sex” (parents were to record “Question asked,” “Age,” “Answer,” and “By Whom”), that disappeared by the 1970s.

To prepare the 2013 edition, McClain says, she and other board members “went to the experts”—pediatricians, dentists, dietitians, teachers at the Laboratory Schools. They removed information on how much a child should weigh at particular ages, for instance, because faculty members advised them that earlier editions didn’t reflect enough variation in normal and healthy weight.

The book, which has sold more than eight million copies through hospital gift shops around the country and now online, is familiar to many families. In the course of revising the book, “it was incredible,” McClain recalls. “So many people said, ‘I had one!’”

Pat Brend’s family has copies of Our Baby’s First Seven Years for four generations. She remembers her mother filling out her book and even storing her report cards in its pages (“some years that was a good memory,” she says).

Brend carried on the tradition with her two sons. She filled out each book completely, she says: “I was very thorough.” And she noticed some changes. Her book had a question about favorite radio programs; her sons’ asked about TV shows.

Brend recently bought a copy for her fifth great-grandchild—the other four have their own copies too. Just as she and her parents and children did, her grandchildren have copies of Our Baby’s First Seven Years in which to lovingly document favorite foods, names of friends, and lost teeth, page by page, generation by generation.

Updated 05.10.2018 to include Mothers’ Aid of Chicago Lying-In Hospital as the original creator of Our Baby’s First Seven Years.