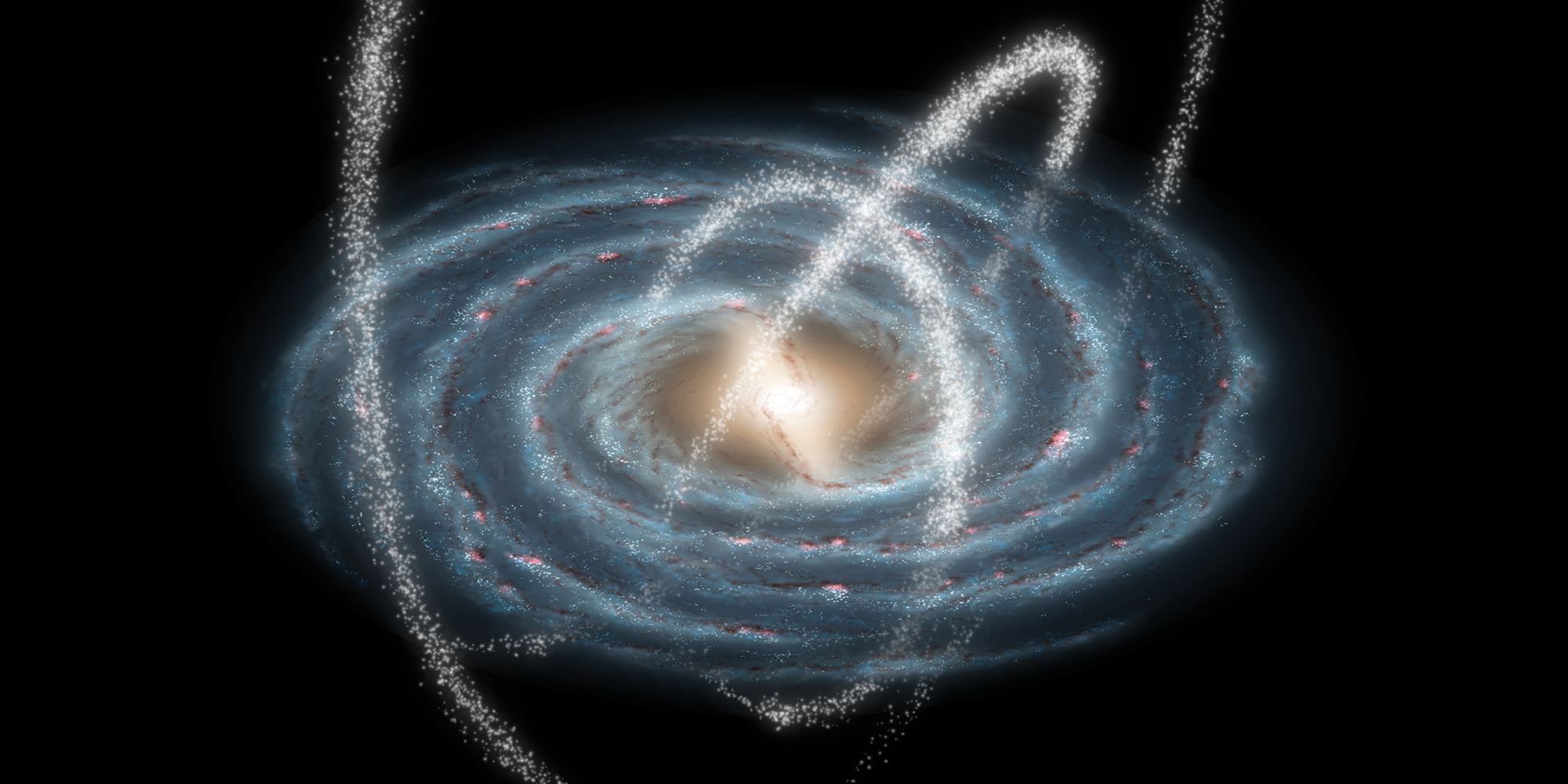 Nom: When the Milky Way devours nearby star systems, it leaves behind stellar streams, like those shown here. (Illustration courtesy NASA/JPL-Caltech/R. Hurt [SSC/Caltech])

Researchers follow a trail of cosmic “crumbs,” fight the flu, and probe the effects of universal basic income.

Our home galaxy is a messy eater. Thanks to the halo of dark matter that surrounds the Milky Way, smaller star systems are pulled toward it and eventually gobbled up. This process leaves behind cosmic “crumbs”—leftover stars torn from their galaxies called stellar streams. At the American Astronomical Society meeting in January, scientists from the Dark Energy Survey, an international collaboration that includes members from UChicago, Argonne, and Fermilab, announced the discovery of 11 new stellar streams. Until now, researchers knew of only about two dozen others. These stellar morsels are tricky to detect, because they’re made up of just a few stars and spread out over vast expanses of sky, but are worth hunting for, because they help researchers understand the Milky Way’s structure, how it grows, and how it interacts with the dark matter around it.

Shot in the dark

If you’ve ever dutifully gotten your flu shot only to come down with the virus months later, you know the vaccine isn’t foolproof. According to a study published February 20 in Clinical Infectious Diseases, your immune history with flu may play a role in the vaccine’s effectiveness. The research team, led by Sarah Cobey, assistant professor in ecology and evolution, analyzed blood samples of adults infected with flu in 2012–13, when the vaccine was only 39 percent effective—a failure blamed on adaptations in egg-grown vaccines, mutations that can cause the virus to differ from circulating strains and become less effective. Instead, the researchers found, many people didn’t have a strong enough immune response to the vaccine, thanks (or no thanks) to a phenomenon called “original antigenic sin.” When the immune system encounters a strain of flu that differs only slightly from types it has seen before, it doesn’t recognize the virus as novel and produces the same antibodies it made in the past—antibodies that may not do the trick anymore. That’s what happened for many people who got the flu vaccine in 2012. According to Cobey and coauthors Emily Landon, assistant professor of medicine, and Vera Tesic, assistant professor in pathology, more research is needed to understand original antigenic sin and ultimately produce better flu vaccines.

Money in the bank

What happens when nearly every resident in a state gets a government-funded boost to their income? Despite the influx of cash, they don’t leave the workforce, according to a February 12 National Bureau of Economic Research working paper coauthored by Damon Jones, associate professor at Harris Public Policy, and Ioana Marinescu of the University of Pennsylvania. They studied the Alaska Permanent Fund Dividend, established in 1982, which provides each state resident of more than a year, regardless of age, with an annual lump sum payment averaging $2,000. These cash transfers don’t affect the state’s rate of employment, the researchers found. However, they do increase the share of Alaskans who work part-time jobs by 1.8 percentage points, an uptick that may be the result of new entrants into the labor market. The study offers new evidence of how different aspects of universal basic income proposals might change employment.