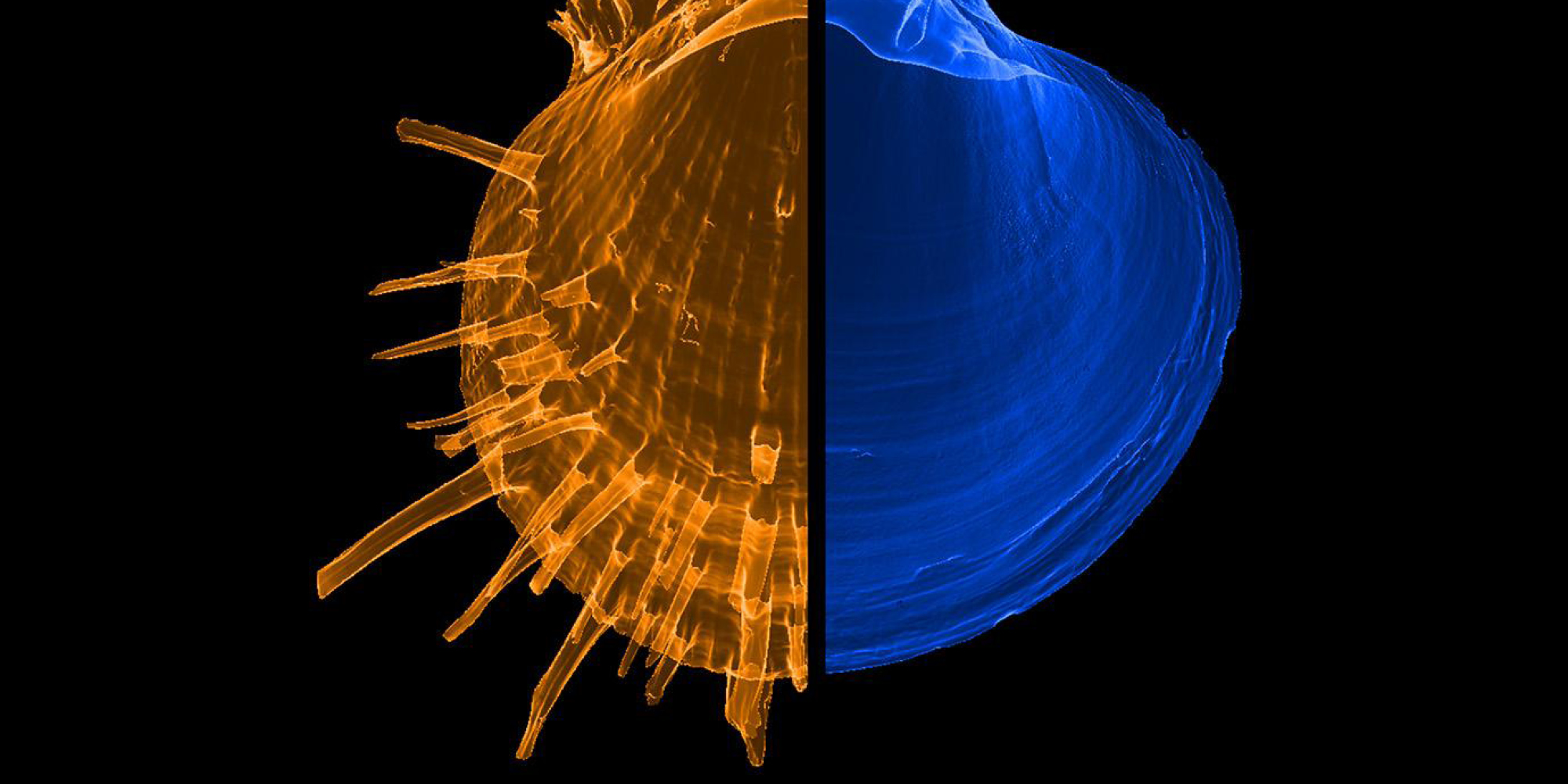 A Spondylus americanus (left) from the Florida Keys, a tropical mollusk species with long spines, and Arctica islandica, found only in cold waters like the Gulf of Maine. (Photo courtesy Katie Collins)

Among all of the world’s natural kingdoms, one rule reigns supreme: there are lots of different species at the tropics, but the numbers drop off sharply as you move toward the poles. “This holds true across virtually all kinds of life and in all kinds of environments, but the reasons why are still hotly contested,” says David Jablonski, the William R. Kenan Jr. Distinguished Service Professor of Geophysical Sciences, whose research on mollusks has helped shape the study of evolution, extinction, and biodiversity. “This is a fundamental question that goes back before Darwin,” he says. The stakes of understanding the geography of biodiversity are big. For one thing, it could help scientists project how species will adapt to climate change.

Scientists have traditionally researched one aspect of biodiversity at a time: the number of species in a region, the species’ form (the shape of an organism’s body), or their ecological function (the way they “make a living”). For example, a clam’s shell can be spiny or smooth, and it can survive by eating sunken logs off a coast or by filtering plankton in tidal flats. All three ways of looking at the animal tell you something different about evolution, niches, and patterns of biodiversity. But each is so complex on its own that any two are rarely studied in unison, let alone all three.

Jablonski believes integrating these approaches could yield important insights. Two recent publications from his lab combine the expertise of different kinds of specialists to investigate the biodiversity shift from tropics to poles.

In one study, Jablonski’s team worked with UChicago bird biologist Trevor Price and his research group, including Matthew Schumm, AB’18, to compare their mollusk data with Price’s understanding of how the traits of bird species vary with geographical environments. In tropical birds, some ways to make a living are common to many species while others support just a few. Many species eat insects on tree branches, for example, but only a few semiaquatic birds eat lizards. This pattern persists midway into the latitudes, but at a distinct tipping point the number of ways to make a living declines, and the distribution of species among them evens out.

The same is true for mollusks, and that result “knocked our collective socks off,” says Jablonski. “For animals, you don’t get much different than a bird and a bivalve, but you see this strikingly similar pattern,” adds Stewart Edie, PhD’18, a postdoctoral researcher in Jablonski’s lab and, with Schumm, the joint first author of the study. “That usually suggests we’re looking at a higher-order control that’s operating on a large scale around the planet, both on land and sea.”

The theory is that in the tropics, there’s more room for fine-scale specialization among species—not just birds that eat seeds, but birds that eat one kind of seed, in one part of the environment (branches high in the forest canopy, for example). But at higher latitudes, the climate is more seasonal and more difficult to survive in, making it less viable to be a specialist. “A lot of the ways of life are still present; you just have to be able to eat every kind of seed, or live anywhere in the canopy,” Jablonski says.

That would be a new insight about how biodiversity works, with implications for how functional diversity will respond to climate change. For example, the food supply could face new risks from parasites that attack “crops or plants we care about—species will arrive that can focus on specific hosts as it gets warmer.”

A second study, led by Edie and postdoctoral researcher Katie Collins, turned to technology to analyze how the forms of mollusks change from tropics to poles. The team used a micro-CT scanner to examine museum-held samples of 95 percent of all the species found in the Florida Keys and the Gulf of Maine, yielding a trove of 3-D images.

Most studies work with shell length and height only, but “of course that’s not the whole picture,” Collins says. With this data they were able to add shell ornamentation, shell thickness, and many other parameters. “Now we can put hard numbers on shell form where we just had general impressions before,” says coauthor Rüdiger Bieler, curator of invertebrate zoology at Chicago’s Field Museum and a member of UChicago’s Committee on Evolutionary Biology.

Beaches in the Florida Keys are littered with large, brightly colored shells with spines, ridges, and knobs. But north of Cape Cod, the shells are smooth, plain, and often small. At first blush this seems to indicate a massive directional shift in the forms species take at different latitudes. Particular species may have more elaborate shells near the equator as an adaptation to better protect themselves from the wider variety of predators, for instance.

That’s not the only phenomenon that scientists found at work, though. “It turns out there are plain shells everywhere,” Collins says. In the tropics you find “a mix of plain and fancy species; the fancy shells just drop out of the mix as you go north.” While some species transform to adapt to varied conditions, other species disappear at higher latitudes. “It looks like the high-latitude climate narrows down the range of viable shell forms, and some lineages are just frozen out, so to speak,” says Jablonski.

This too has implications for humans as they continue to alter the climate and environment. “What this suggests is that species are more likely to drop out than to adapt to the tougher conditions at high latitudes,” Collins says. “This could affect humans in a very real way. Bivalves serve a huge role in fisheries, and we don’t know if the ones we like to eat most, like oysters or scallops or mussels, are going to disappear or move out of their accessible fishing grounds as the climate changes around them.”

This study was done on modern species; the next step is to add fossils. (Scientists love mollusks because their shells are easily fossilized.) That, Collins says, will shed light on whether “the fancy lineages are more extinction prone or if they’re stable.”

Taken together, says Jablonski, the studies show that the diversity of animals’ forms and the diversity of their functions “don’t all change together on a global scale, and the mismatches tell us something new about the forces shaping life on Earth.”