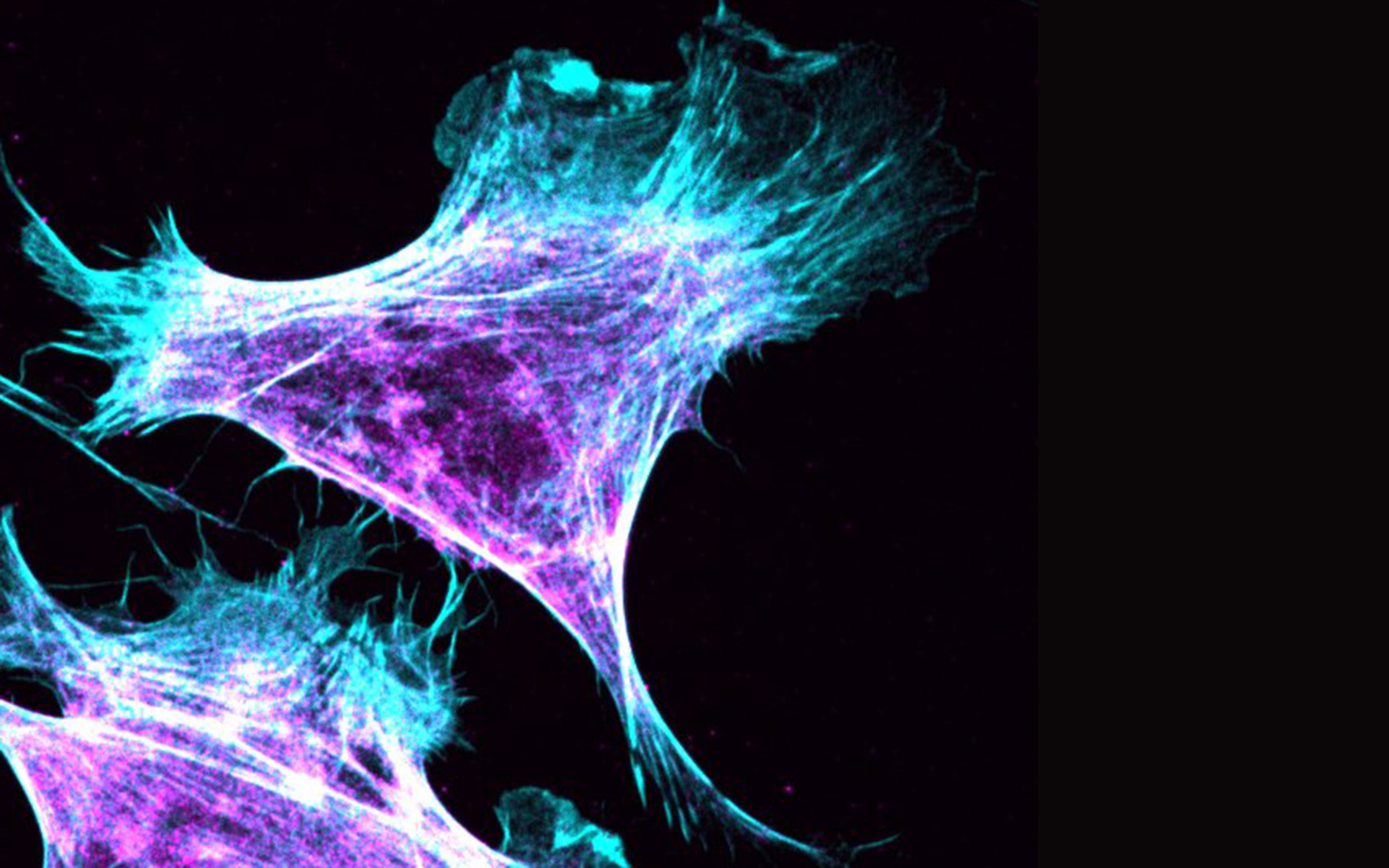 Margaret Gardel, the Horace B. Horton Professor in the Department of Physics and the College, found her area of study through a series of serendipitous events. Her graduate research at Harvard focused on filamentous actin, a polymer found within cells in multicellular organisms.

In living cells actin drives cell motion and is essential in building multicellular tissue. Gardel was interested in the ways actin (as part of a polymer network inside cells) deforms in response to external mechanical stress, but in a physics lab the approaches used to study those types of properties had been developed for traditional polymeric materials—think of Jell-O or Silly Putty. Those materials don’t spontaneously move or build complex multicellular organisms.

Near the end of graduate school, Gardel was increasingly bothered by this gap. How can we make measurements to understand the materials that living cells use to support their physiology?

Through a chance exchange with a collaborator, Gardel attended a physiology course at the Marine Biological Laboratory after she finished her PhD. There she met cell biologists willing to teach a physicist about the inner workings of cells. She also met Clare Waterman, who convinced her to leave her postdoc position and move across the country to join her cell biology lab at the Scripps Research Institute, where she learned how to image the polymer networks inside cells while they crawled and built adhesions with the external matrix and each other.

Since Gardel had taken only one biology course as an undergraduate, her time with Waterman proved critical. She was used to thinking of material building blocks as passive structural elements. But proteins and other building blocks used by living organisms are mechanochemical enzymes—that is, they can convert chemical energy to do local mechanical work. Likewise, local mechanical forces also impact their chemical reactivity. Thus, living materials provide building blocks that don’t exist in physics, inspiring new types of research.

Gardel’s lab—its URL is squishycell.uchicago.edu—seeks to understand how physical forces such as pressure and deformation act on individual cells. The lab’s two main areas of inquiry complement each other: One seeks to understand the physics of how living cells adhere and move. The other, she says, seeks to build cell-like material “from scratch.”

To address these challenges, Gardel collaborates with labs across the Physical Sciences Division, as well as in the Biological Sciences Division. For example, UChicago cell biologist Michael Glotzer developed a genetically encoded tool to control the localization of proteins within living cells using light. With this tool, Gardel’s lab has studied how cells respond to local changes in force either internally or at points where they connect with other cells. In the second research area, Gardel is working on a materials project with UChicago biochemist David Kovar building active materials: gels and fluids that contract the way muscles do.

If scientists can understand how biological materials adapt, they'll learn new types of design principles. There are undoubtedly dozens of applications for these design principles in medicine alone, but Gardel is most interested in figuring out how things work. Scientists have wanted to understand cells since first seeing them under a microscope, and unlocking the biochemistry and genetics of cells has answered a lot of questions.

“What 20th-century biology has given us is knowledge of what’s under the hood,” she says. However, she adds: “We still don’t know how each of the components work together to facilitate the complex cell physiology.”

As Margaret Gardel leads the scientists in her lab toward discoveries in “living matter,” she hopes they learn from each other as well as from her. She recalls her graduate adviser at Harvard, David Weitz, saying, “If I’m the only person you’ve learned from in graduate school, you’ve wasted your time.” She gives her lab members the same advice.

Fostering a collaborative environment is an important part of scientific research today, she says. So is acknowledging—and then trying to reduce or eliminate—unspoken or unconscious biases. Gardel considers herself one of many women in science of her generation who “really felt like gender was not an issue—until we got to the higher stages and realized it is.”

Gardel says she has always felt well supported at UChicago. However, as she’s progressed in academia, serving on grant review committees, participating in speaker selection for conferences, and interacting with journal editors, she has become “more aware of all these interactions that occur that are not necessarily based on the quality of the science.”

She now feels more strongly about calling out these biases—even just talking about them in stories like this one—and being a “more vocal advocate for people who aren’t in a position to advocate for themselves.”