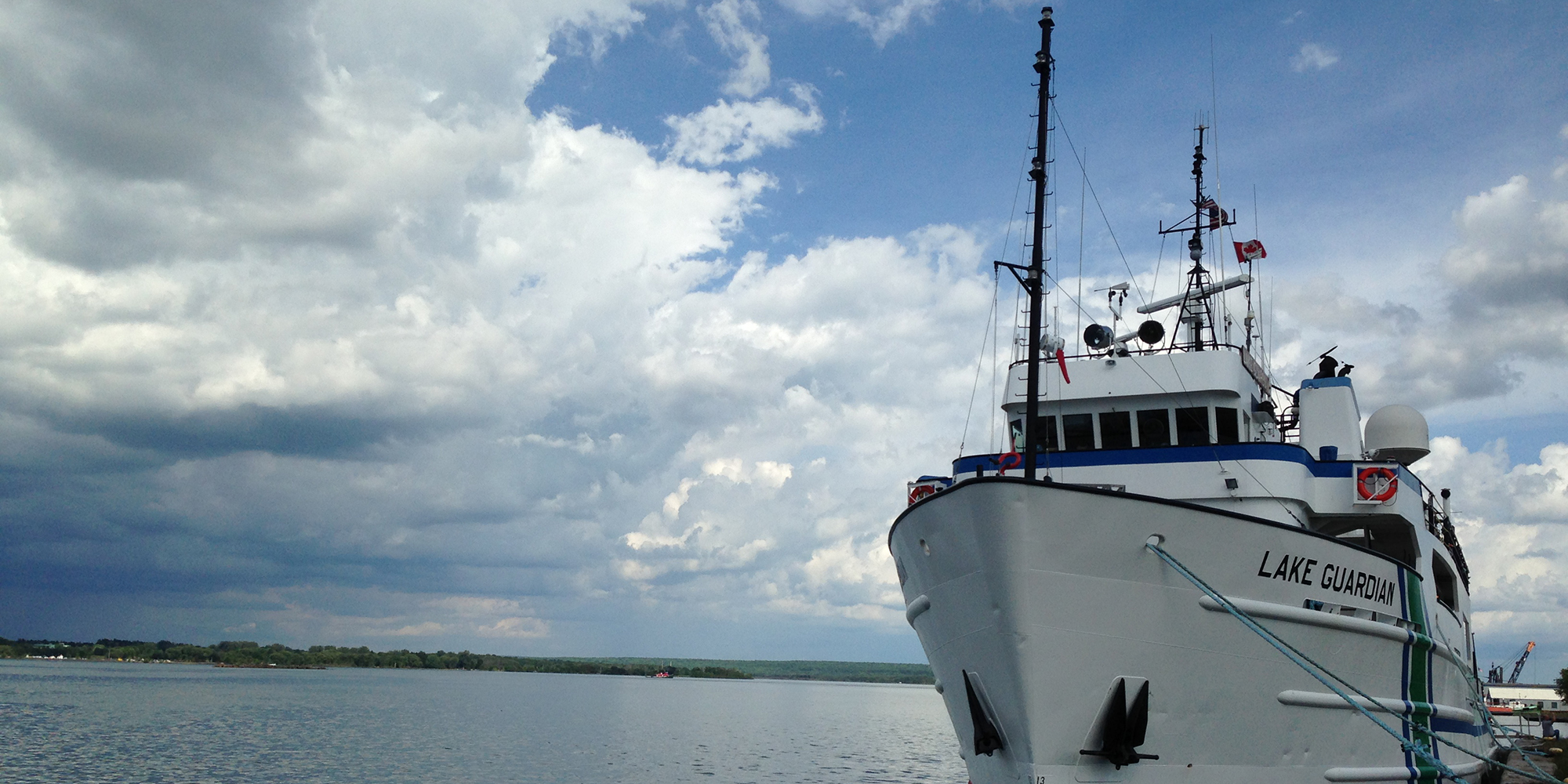 The research vessel Lake Guardian sails on behalf of the US Environmental Protection Agencyʼs Great Lakes National Program Office, gathering environmental data to gauge the health of the Great Lakes. Maureen Coleman and her team were aboard the ship for their spring 2019 fieldwork. (Photography by Courtney Winter)

“There’s a lot of interest lately in the human microbiome,” says Maureen Coleman, an assistant professor in the Department of the Geophysical Sciences. “But lakes also have a microbiome.”

If you swallow a drop of water from Lake Michigan, she explains, it will contain roughly a million bacterial cells and 10 million bacteriophages—tiny viruses that infect bacteria and may outnumber every other organism (micro and macro) on Earth. Coleman’s lab studies how such communities of microbes adapt, interact, and coevolve.

UChicago researchers are fortunate to have an excellent model system for studying bacteria and their hangers-on right in their backyard. This system is not just Lake Michigan but the Great Lakes as a whole. “It was shocking to me when I arrived here in 2012 that no one had yet systematically characterized the microbiome of the Great Lakes,” Coleman says. Her lab is now doing just that, in collaboration with the Environmental Protection Agency. (The EPA has tracked water quality and some multicellular organisms in the lakes since 1983, but its research had not included the systematic sampling of bacteria, archaea, and viruses.) A forthcoming paper in the journal Environmental Microbiology details some results of the lab’s work completing the first microbial time series—a comparison of populations in water samples drawn from the same sites over time—that covers all five Great Lakes. They completed their spring 2019 sampling in May and are gearing up for their eighth summer on the water.

Why dip your toes into such an ambitious research program? Because microbes perform a number of vital ecological functions. For one, Coleman says, they process all of the runoff from land, including “all of the fertilizer, all of the pesticides, all of the pollution from Chicago—although not our sewage because we send that down the river.” They are also fundamental to the food web. “If you’re interested in fisheries, for instance, you need to care about what’s happening at the very bottom of the food web as well.”

Moreover, microbes serve as “sentinels for change” by indicating shifts in environmental conditions. Coleman cites a 2014 incident in which drinking water in Toledo, Ohio, was tainted by a toxin produced by a bloom of cyanobacteria in Lake Erie. Detecting shifts like these and understanding how they occur can help scientists predict and mitigate some of the harmful effects of climate change or changes in land use.

The Great Lakes “each have their own unique character—Lake Erie is really, really different from Lake Superior—and yet at the same time, they’re connected,” Coleman says. While this makes them a theoretically interesting system, the lakes are also inherently valuable, supplying a staggering 20 percent of the world’s liquid fresh water. Keeping this precious, sought-after resource in good shape is, in large part, a matter of following the microbial signals.

Real-world challenges such as these are what motivate Coleman, whose PhD from MIT is in civil and environmental engineering. “I am in no way qualified to build a bridge or anything,” she says, laughing. “But I do still carry with me that desire to solve problems, as opposed to just studying basic science for the pure love of theory and fundamentals.”

Coleman describes fieldwork and lab work as complementary: discoveries in the wild can inspire hypotheses that you test back home. In the lab, Coleman’s team uses a technique called transposon sequencing to knock out genes from microbes and observe the resulting functional differences. “With this approach you can do global-scale gene deletions and then test the functions of all of these genes essentially in parallel.” Such experiments are in demand: scientists have gotten so good at discovering microbial genes that thousands more have been identified than are well understood.

The scope of the unknown in microbiology is a familiar and humbling fact to Coleman. Her PhD research was on the photosynthetic cyanobacterium Prochlorococcus—an organism that, despite being among the most abundant bacteria on Earth, was not discovered until 1986, by a team including Coleman’s adviser Sallie “Penny” W. Chisholm. Today’s sequencing technology, Coleman says, “gives us a new tool to figure out how much we don’t know.”