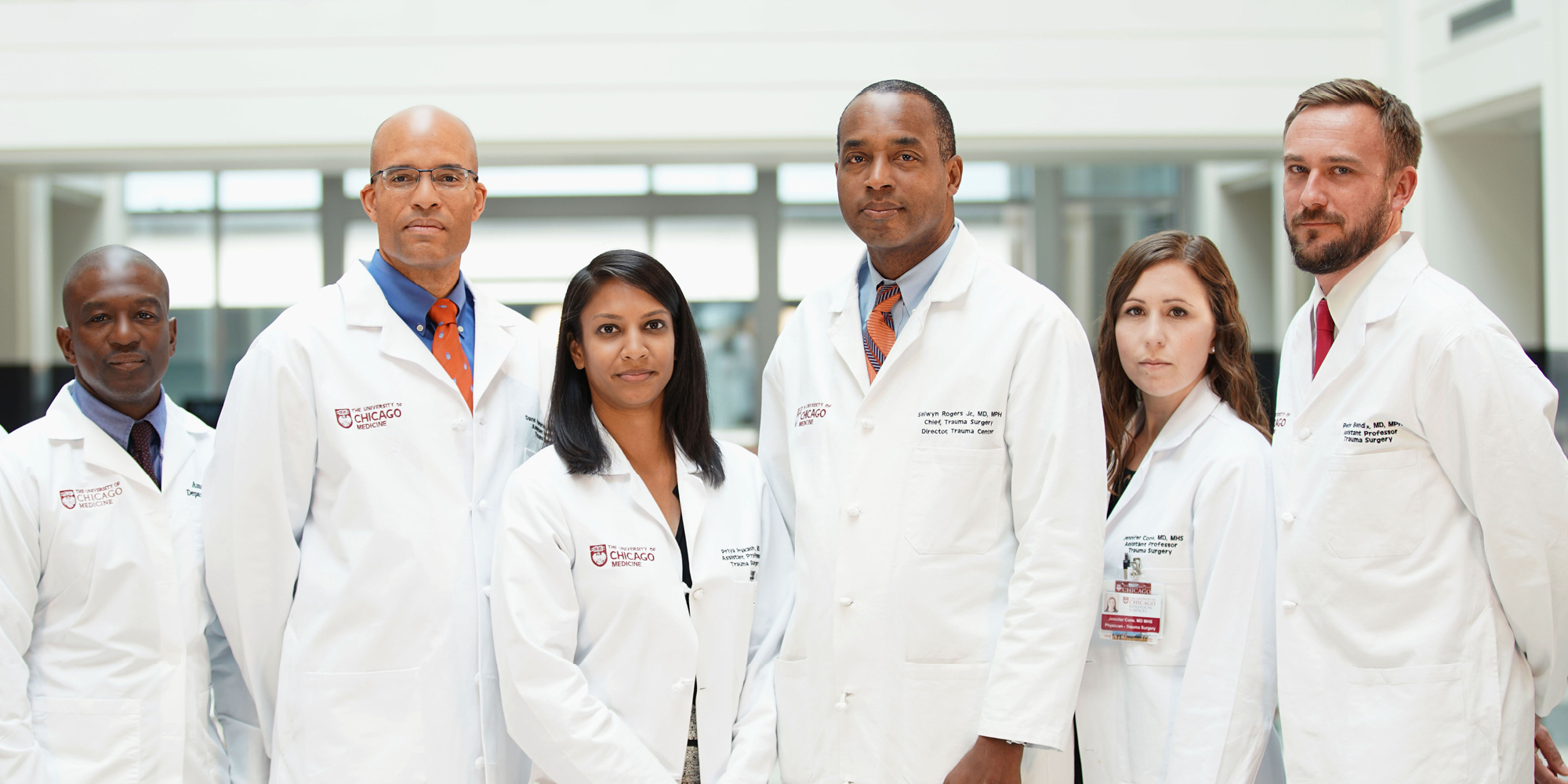 By treating violence as a public health issue, UChicago Medicine trauma experts seek to transform care on Chicago’s South Side.

By
Author
Brooke E. O’Neill, AM’04
|
The University of Chicago Magazine
—
Fall/18

“Obviously it’s a huge job to stand up a level I trauma center from the ground up,” says Selwyn O. Rogers Jr., director of the University of Chicago Medicine’s new level I adult trauma center and chief of trauma and acute care surgery. “But it can’t be the only solution.” UChicago Medicine began providing adult trauma services in May and averaged nine patients a day from May 1 to September 30.

For Rogers, filling the 27-year absence of adult trauma care on Chicago’s South Side is part of a much larger mission: to reduce the violence that has left residents devastated and a generation traumatized. Although most of the patients UChicago Medicine treats won’t be gunshot victims—the most common life-threatening injuries that bring people to any trauma center are car accidents and falls—many will be.

“If we don’t address violence as a public health issue,” Rogers says, “and deal with its root causes—the impact of trauma over the life cycle, the lived experiences of communities that are chronically disinvested in, and the resulting poverty, discrimination, and lack of economic opportunity—we will continue to see the problem of intentional violence manifest itself.”

Joining Rogers’s trauma surgery team this year are five professionals from cities such as Flint, Michigan; Los Angeles; and Cleveland, all besieged by violence of their own. Most have come to the South Side frustrated by what they see as a disconnect between what they do in the operating room and the situations that bring patients there in the first place.

“It’s very easy for us as trauma surgeons to just operate on people, take care of them in the ICU, and leave it at that,” says Jennifer Cone, a Chicago native who completed her surgical fellowship at Los Angeles County Medical Center. “But that’s not fixing anything when we get the same patients in over and over.”

Military veteran Kenneth Wilson agrees. “My entire surgical career I’ve struggled with the fact that we’ve gotten very good at fixing the physiology as a consequence of trauma—and often pat ourselves on the back—but we’ve never tackled the psychology of what gets you into that situation.”

Over the past two decades, local leaders have fought hard to bring adult trauma care to the South Side and to the University. The outcry reached fever pitch in August 2010 when Damian Turner, an 18-year-old activist, was gunned down in a drive-by shooting several blocks from the UChicago Medicine campus. Paramedics took him to the nearest adult trauma center, more than nine miles away. According to news reports, he was pronounced dead about 90 minutes after the shooting.

“There was a lot of frustration and anger within the community,” says Rogers, who came to Chicago in 2017 from the University of Texas Medical Branch in Galveston, where he served as vice president and chief medical officer. Once UChicago Medicine made the decision to offer adult trauma services, however, residents fueled its creation with “incredible passion.” More than 100 individuals applied to join UChicago Medicine’s 20-person Community Advisory Council, a task force designed to keep community health needs at the forefront.

Holistic care is critical. “Obviously, we’ll focus on restoring people’s physiology,” Rogers says, “but entry starts off with a conversation, not a judgment. A few simple words: ‘How can I help?’”

It’s a fleeting moment that can be transformative, particularly for someone who’s grown up in a traumatic environment.

“Many of these kids coming in are surrounded by neighborhood violence, many suffering from post-traumatic stress disorder,” says Debra Allen, a registered nurse and clinical director of trauma services. “There is a moment of opportunity—and this is rare in a person’s life—where we can change the path they’re on. One of those moments is when people are injured.”

The trauma center’s violence recovery program has forged connections with local organizations including Chicago Survivors, the Heartland Alliance, and the YMCA. In late 2017 the trauma team and University faculty from medicine, law, and history came together with more than 100 community partners to begin shaping a hospital-based violence recovery program designed for the South Side.

Mental wellness emerged as a key focus. “We know that after trauma, it doesn’t just affect the individual who has been traumatized, but also close contacts and friends,” Rogers says. He pointed to one heartbreaking example among far too many: the deaths of two young South Side girls, Takiya Holmes, 11, and Kanari Gentry-Bowers, 12, both shot by stray bullets in separate incidents on February 11, 2017.

“What’s the effect on their peers as they move forward?” he asks. “Where does their hope for a better day come from?”

“We want our trauma center to be a leader in thinking about violence,” says Kenneth S. Polonsky, dean of the Biological Sciences Division and the Pritzker School of Medicine and executive vice president for medical affairs for the University of Chicago. “How can you prevent it? How can you identify people who are at risk? How can you reduce the risk of recurrence in people who have already been involved? Dr. Rogers is extraordinarily well qualified for that.”

Just as combating violence requires all hands on deck, Rogers says, the same is true for creating a world-class trauma hospital. From designing a system of comprehensive care to implementing quality improvements, hiring surgeons, and connecting to a regional trauma network, Rogers and UChicago physicians, nurses, and other clinicians have built a center that will deliver the highest level of care for life-threatening injuries.

In December 2017 the medical center opened a new $39 million adult emergency department, the primary entry point for trauma patients, who are treated there and moved to other parts of the hospital once stabilized. Designed to dramatically improve speed and efficiency, the state-of-the-art facility has three rapid assessment bays for initial physician screenings; four specialized bays for stroke, heart, and trauma patients; and 24/7 emergency radiology services, a first for the hospital. Adult trauma also builds on UChicago Medicine’s existing level 1 pediatric trauma program and its Burn and Complex Wound Center.

“The opening of the trauma center reflects what can be accomplished when the University, UChicago Medicine, and the community come together to work toward common goals,” says Derek Douglas, the University’s vice president for civic engagement and external affairs. “In that same spirit of partnership, the University is leveraging its strengths in education, research, innovation, and community engagement to identify ways to prevent violence.”

“The trauma center isn’t a place, it’s a network,” says Kam Buckner, lecturer in public policy studies in the College, who cotaught a field research course on health care disparities in Chicago with Rogers last year. Among other campus partnerships, the trauma center is cosponsoring a yearlong lecture series through the MacLean Center for Clinical Medical Ethics.

“We have the opportunity to do something transformative here on the South Side,” says Rogers, who aims to create models of violence prevention that can be replicated nationally. “I’m trying to challenge people to think differently. Certainly, UChicago Medicine and UChicago cannot do it by ourselves, but we have powerful voices.”