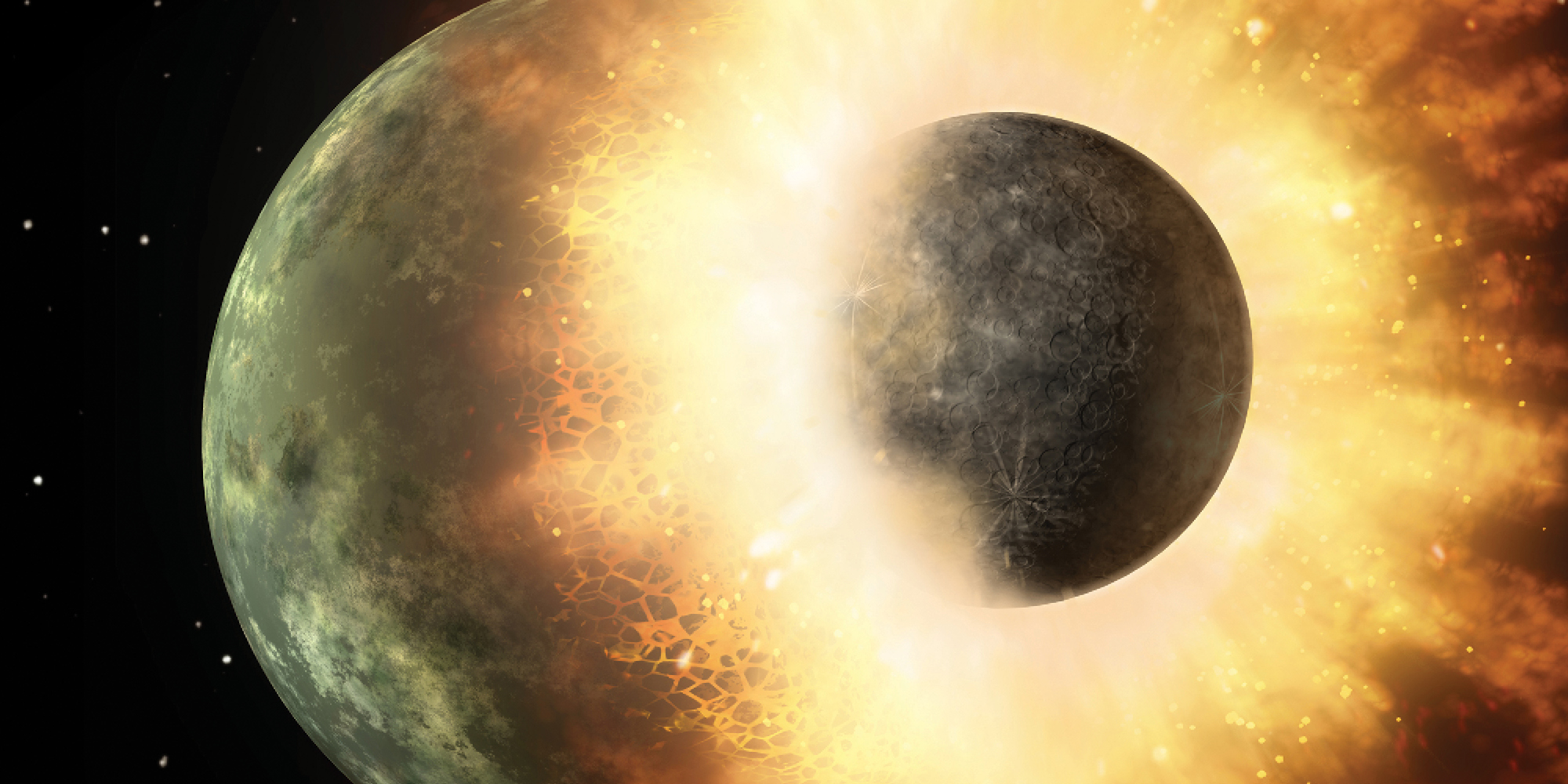 Scientists think Earth’s moon formed from a collision like this one, but there are a lot of unanswered questions. (Illustration courtesy NASA/JPL-Caltech)

A study of lunar rocks sheds new light on the origins of the Earth and its moon.

The question of when Earth got its water is one scientists puzzle over. Did it happen relatively late, as a result of collisions with meteorites and other objects containing ice? Or was it earlier, as the young planet was still forming?

New research from a team including UChicago cosmochemist Nicolas Dauphas, published in Science Advances, suggests it was the latter—that Earth acquired the majority of its water during the main stage of its growth. As part of their study, the team performed the largest analysis to date of oxygen isotopes in lunar rocks.

Understanding when and how Earth became the blue planet it is today is important because it sheds light on another scientific puzzle—how the moon and Earth came to coexist.

Up until about 10 years ago, scientists thought they had a pretty good theory of the moon’s formation. But then more precise measurements of lunar rocks came along and complicated the existing model.

The most widely accepted theory of the origin of the moon speculates that a giant object about the size of Mars, known as Theia (for the Greek goddess who was the mother of Selene, goddess of the moon), smashed into proto-Earth at just enough velocity that parts of both bodies broke off and formed the moon. Earth, according to this theory, has a little of the moon and the moon has more of Earth, but you’d expect to find significant differences between rocks from each body. Early measurements—many taken by the late UChicago geochemist Robert Clayton—did not have sufficient precision to tell lunar rocks and Earth rocks apart.

But in the last decade, Dauphas says, it became clear this picture wasn’t quite right. Elements can come in different forms, called isotopes, and these give scientists clues to a rock’s origin. As ways to measure isotopes improved, scientists discovered striking similarities between the moon and Earth. Referred to as the “lunar isotopic crisis,” this introduced a problem for the main theory of lunar formation, because it’s highly unlikely the isotopes would be exactly the same for two random objects in the solar system.

“This, to my mind, is one of the most compelling questions in modern planetary science,” says Dauphas, head of the Origins Laboratory and professor in the Department of Geophysical Sciences and the Enrico Fermi Institute. “Right now it’s completely open. It’s amazing to still be asking this.”

One theory to explain the matching isotopes is a scenario in which proto-Earth was totally vaporized by one or more giant impacts, and both it and the moon formed out of the cloud. But major uncertainties persist, since scientists have reached different conclusions about how different the oxygen isotopes between lunar and terrestrial rocks really are.

Seeking to clarify the issue, Dauphas and his fellow researchers measured the oxygen isotopes of both lunar and terrestrial rocks with extremely high precision. They found a very small but detectable difference in the isotopes of the two bodies.

And that’s where water comes in. If Earth’s water was added late as a result of meteorite collisions, as a popular theory contends, then Dauphas’s team would have found a greater isotopic difference between lunar and Earth rocks, because water-bearing meteorites have unusual mixtures of oxygen isotopes. But the isotopic differences they identified were more subtle, suggesting that only 5 to 30 percent of all the water on Earth arrived on meteorites after the great impact. That indicates most of Earth’s water probably arrived much earlier. The question of how planets acquire water is interesting for a number of reasons, Dauphas says, including the search for distant exoplanets that might have water—and thus a similar kind of life.

Dauphas notes that the current study only focused on oxygen isotopes. Measuring the isotopes of other elements might reveal bigger differences between the moon and Earth, and complicate the picture. “Oxygen, titanium, tungsten—these are the ones that are still keeping us up at night,” he says. He and his colleagues have found an important clue, but the mysteries of Earth’s water and its relationship to the moon aren’t solved just yet.