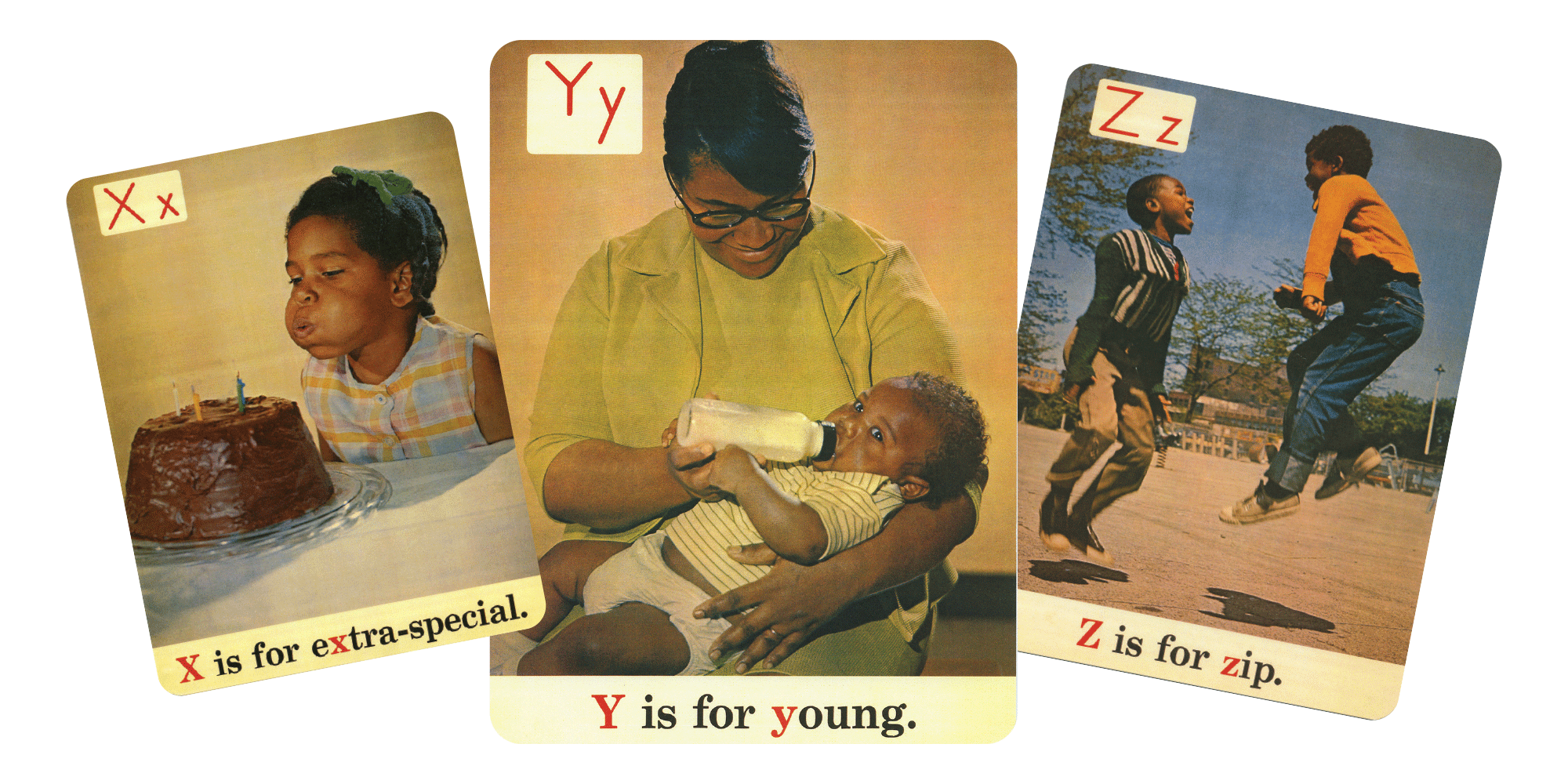 First released to educators in 1970, the visual learning aid known as the Black ABCs was designed to help young students learn to read with portraiture and language that reflected them. As the Chicago Defender wrote that year, the 13˝ x 17˝ posters aimed to ensure that “Black children see themselves in the majority (as they are, in fact, in many areas and many schools) as important, capable, attractive, responsible, and with a long history of contributions to our country.” Fifty years later, the Black ABCs remain a symbol of racial identity and pride, suffused with the aesthetic of the Black arts movement and a belief in empowerment through education.

These alphabet posters also documented history. The pictures for “A is for afro,” “G is for groovy,” and the 24 other letter-association cards were photographed at the Harold Ickes Homes, showcasing children living in the now-demolished public housing project on Chicago’s Near South Side. To create the Black ABCs, educator and activist June Heinrich, AB’40, AM’41, who specialized in early-education teaching programs, worked with Bernadette Triplett, an elementary school teacher and later assistant principal at the Richard E. Byrd Community Academy near the Cabrini-Green Homes. Heinrich and Triplett produced their “soul primer,” as the Defender called it, for the Society for Visual Education, cofounded in 1919 by several UChicago faculty members.

Photographer and University of Chicago neurobiologist Okunola Jeyifous, PhD’05, revisited the Black ABCs for the exhibition S Is for Soul Sister, working with the University’s Arts + Public Life (APL) initiative to locate some of the Chicagoans who appeared on the cards as children. Jeyifous shot present-day portraits of six such subjects for the exhibition and, with the help of APL staff, recorded their oral narratives to create an audiovisual experience for the exhibition’s January 17 through March 18, 2020, run at the Arts Incubator on East Garfield Boulevard.

The idea to document and deepen the story of the Black ABCs emerged from extensive conversations with exhibitions coordinator Hannah Jasper and other APL staff members. Cheryl Reese, who appeared on the “T is for talk” card as a child, offered Jeyifous and his collaborators their initial leads in locating other Black ABCs alumni.

Jeyifous also switched lenses to deepen the original series’ treatment of group identity. Where the Black ABCs give his subjects an iconic status as exemplars of Black cultural identity, Jeyifous wanted his artworks to “personalize” them, down to the cellular level, and to situate them in a way that would “amplify their stories.” A research assistant professor in neurobiology at UChicago, Jeyifous used his expertise in high-resolution microscopy and cell imaging to supplement his photographic portraits. At the time of their interviews, the portrait subjects gave Jeyifous cheek-swab cell samples that he stained with reagents, imaged with a microscope, and processed with digital software. Jeyifous collaged pictures of the subjects’ cells with their new portraits to create what he calls “micro and macro portraiture.”

With his collaged portraits on one wall of the Arts Incubator gallery and the 26 letters of the Black ABCs on another, Jeyifous points out, the exhibition showed the subjects and “the arc of their lives in a single space.”

To Jeyifous, S Is for Soul Sister fits into a body of work he’s amassing as a photographer drawn to “memories of place.” As a scientist, he’s always been interested in the neurological basis of self-identity—how we come to know ourselves as ourselves—and his PhD work focused, as he puts it, on “how short-term experience gets turned into long-term storage of memories.” S Is for Soul Sister allowed him to explore these themes through the personal histories of six individuals connected by the social history of Chicago’s 20th-century experiment in public housing.

The APL curators see their role as creating a space for these kinds of stories to be told, and they hope their efforts will amplify the voices of those who too often go unheard. Like Jeyifous, APL assistant director of communications Erin Venable singles out an anecdote told by several S Is for Soul Sister subjects about the communal life that flourished in the Ickes Homes. During summers  everyone occasionally tuned their radios to the same station and let the sound flow from their balconies. “It was just this groove throughout the whole complex,” Venable recounts, bringing the community together around a rhythm. Jasper emphasizes that S Is for Soul Sister was all about documenting “stories that have often gone ignored or overlooked.” She wants to bring more attention to the work of Heinrich and Triplett in creating the Black ABCs and hopes eventually “to have a name for every kid that's featured” in each of the 26 cards.

From early on there were plans to extend the project. When the exhibition opened in March, letters of the alphabet beyond the six Jeyifous had photographed—or their family members—came to the gallery and helped extend the APL team’s network into the world of the Black ABCs. With the Arts Incubator closed during the COVID-19 pandemic, the team is laying the groundwork for more interviews, though health precautions have halted further in-person sessions. They have started to mount virtual exhibitions and plan to put S Is for Soul Sister online soon. In the meantime, take a look back at the Arts Incubator exhibition in the video below.

And as S Is for Soul Sister awaits its next iteration, Jeyifous is launching his next photography project. He’s still exploring memory and place, and he continues to bring the photo shoot back to the laboratory. “It’ll be a visual investigation of how spaces come to have meaning to us,” he says. “Rather than taking photos of cells, I’m actually going to clone out some people’s cheek swabs, clone out genes that are involved in the formation of spatial memories,” and by running that genetic data on a gel, use the banding pattern they produce to make visual works. The result will be a study of how our perceptions create our senses of place and self. Like S Is for Soul Sister, it will explore identity at the deepest levels.