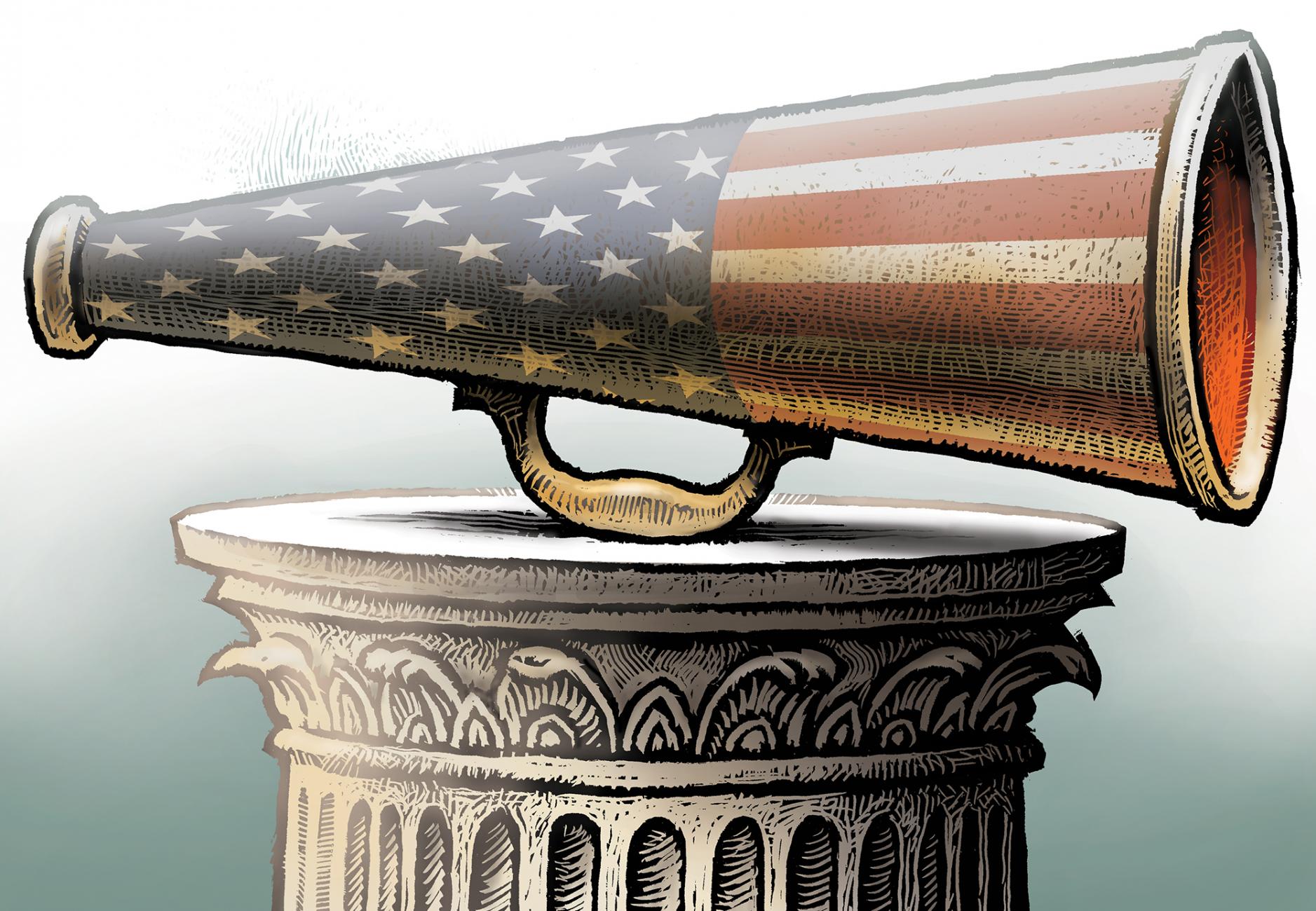 In 1919 the Supreme Court decided Schenck v. United States, its first decision on the First Amendment. The court’s unanimous ruling in the wartime case allowed the punishment of socialist Charles T. Schenck for distributing pamphlets urging men to resist the draft. Freedom of speech, wrote Oliver Wendell Holmes for the majority, could be restricted if the speech presented “a clear and present danger.”

Over the next 100 years, First Amendment law has grappled with ever-changing communications technology and evolving dilemmas. In The Free Speech Century (Oxford University Press, 2019), edited by Law School professor Geoffrey R. Stone, JD’71, and Columbia University president Lee C. Bollinger, they and 16 scholars, including UChicago faculty members David A. Strauss, Laura Weinrib, and Tom Ginsburg, examine the past and future of the free speech doctrine in the United States and around the world. Strauss and Stone discussed our free speech moment at the Seminary Co-op in January. This extract from their conversation has been edited and condensed.—Laura Demanski, AMʼ94

Listen to the full conversation »

STRAUSS Lots of times when people say the such-and-such century, like the American Century, they mean it’s over—that this was a golden age but now we’re at least worried that the era is coming to an end. Is either part of that what you had in mind, or what you think is true?

STONE It’s actually not what we had in mind. But there’s no doubt that we are living through a period in which many of the basic precepts of the First Amendment, as it developed over time, are called into question by changes in the nature of the media.

When people our age grew up, most Americans got their news and information from mainstream sources that were reasonably trustworthy and reliable. The Wall Street Journal disagreed with the New York Times, and the Nation disagreed with the National Review, but they all more or less were responsible about the ways in which they characterized and reported the facts.

With the invention of radio, Congress imposed the fairness doctrine, which provided that if you got a license to operate a radio or television station, you were under legal obligation to cover public affairs and public matters in a fair and balanced way. Even though the fairness doctrine was repealed under the Reagan administration, if you go to ABC, PBS, or the New York Times you generally see a fairly responsible, mainstream approach, even though nothing in the law requires them to do that.

But cable was never subject to the fairness doctrine. You suddenly saw things for the first time like MSNBC and FOX News. And then with social media, we see a kind of tribalism in which many individuals get their news and information from what one would have to say are highly unreliable, highly ideological sources that lead them to be deeply polarized in their views, and even in their understanding of what the real facts are.

The First Amendment was based upon the notion of a free marketplace of ideas in which people would responsibly get access to information, ideas, and different opinions, and be able to debate them with one another and come to some sensible conclusions. But the tribalism that we’re now seeing raises serious questions about whether those basic assumptions can be carried into the future.

STRAUSS One optimistic story—which I’m not sure I subscribe to—goes something like this: We’ve accommodated new media for the last 100 years. We take some of these things for granted, but they were big innovations when they happened. Maybe social media, too, will be something where the doctrine, law, and our attitudes toward free speech will adapt a little, but the basics won’t change. Do you buy that?

STONE I’d like to have that degree of optimism, but I do think, in terms of your story, we don’t know what would have happened if Congress hadn’t intervened [with the fairness doctrine]. Should there be government intervention in the social media world? The irony is, when social media came into being, government provided a very different set of rules than we have for radio, television, newspapers, or anything else.

The New York Times and ABC are liable for what they allow to be presented in their forum. In social media, Congress did the opposite. It said these platforms are basically intermediaries that enable the individual to reach other individuals. Therefore, they’re not liable. We don’t want them censoring what individuals can say, right? You could be sued if you put something on social media that defames or threatens somebody. But Facebook and Twitter can’t. There’s increasing desire to have government intervene, and pressure on these platforms to screen what people can say—the exact opposite of what the original conception was.

STRAUSS One kind of simplistic, almost caricature of the First Amendment and the American system of free speech is that, yes, private parties do all kinds of bad things, but the real threat comes from the government. Is that fair, and do we need to change that attitude?

STONE The basis of all constitutional rights are rights against the government. So there’s an irony in suddenly relying upon the government to solve a problem in an area in which we’re very suspicious of it, right? On one hand, the fundamental concern of the First Amendment is distrust of government. But on the other, there are circumstances where trust of government may be better than distrust if we are giving it very limited powers and monitoring to make sure they enforce those powers in an appropriate way.

The fairness doctrine, I think, was a great success. Is there any way to replicate something like that in the world of social media? I’m very suspicious of it. I’m not sure I could draw model legislation that I would be comfortable with. But I do think that, left to its own devices, social media carries a different set of dangers than radio and television did. If you reach a situation where citizens are unwilling to hear competing positions, then you’ve got a real problem about the whole premise of having a First Amendment.

David’s piece in the book raises another interesting set of issues about the current era in terms of national security and keeping government secrets.

STRAUSS My piece is about what you do with information that the government unquestionably has a right to try to keep secret—classified national security information, for example. In the Pentagon Papers case, Daniel Ellsberg, a private contractor working for the Defense Department, handed over a stack of papers about the origins of the Vietnam War to the New York Times. They were classified. He could have been fired. The government did prosecute him, but the prosecution was unsuccessful for various reasons.

The Nixon administration sued the Times to try to get an injunction against their publishing it and lost. The Supreme Court said, “No, they’re entitled to publish it even though it’s classified information.” Now, that’s an odd equilibrium. If the government can successfully keep it from being leaked, then it stays secret. But once it’s leaked, it’s gone. It kind of worked, because it was actually really hard to leak. Ellsberg had to smuggle physical pieces of paper out of his job to a friend’s photocopying machine.

It also worked because the media then were the Times, the Washington Post, and the major broadcast networks. If you wanted to reach a national, much less global, audience, they had to publish your stuff. And they were conscientious people; the Times spent months reviewing the Pentagon Papers to make sure none of the stuff was really damaging. Some of it, they didn’t publish.

You can see how the world has changed. You don’t have to be Ellsberg, who was a real insider. You just have to be the IT guy—and of course, that’s not fictional—and have a thumb drive. Then you have the internet and it gives you the world. We need a new way of thinking about those problems.