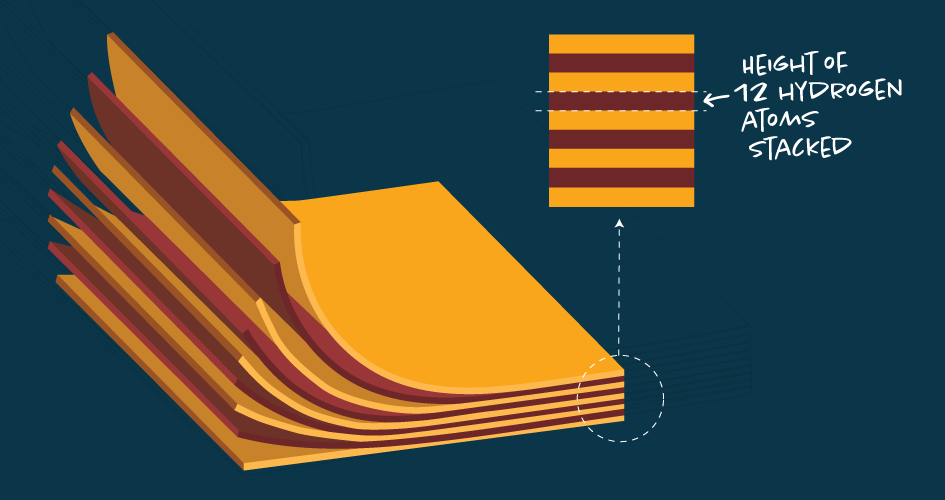 By
Author
Kaitlyn Akin, ’19
|
The University of Chicago Magazine
—
Fall/17

To make electronics such as cell phones smaller and faster, scientists need to make semiconductors smaller too. A team led by Jiwoong Park, professor in chemistry, the Institute for Molecular Engineering, and the James Franck Institute, has developed a new and cost-efficient way to make stacks of semiconductors that are just a few atoms thick. The research was published September 20 in Nature. Rather than the common technique of growing stacks of film-like semiconductors, one on top of the other, Park and his collaborators, including postdoctoral scholar Kibum Kang, grew individual films, put them into a vacuum, then stuck them together like Post-It notes. This technique, which works with a variety of materials, protected the pristine surfaces between each semiconductor layer better than the existing method. The researchers believe semiconductors created with this technique could be used in computer chips.

Early birds get the job

If you’re hunting for a new job, don’t wait to submit your résumé: employers in the technology sector accept applications for an average of just nine days after posting a job online, according to a March 7 working paper from Steven J. Davis, the William H. Abbott Distinguished Service Professor of International Business and Economics, and Brenda Samaniego de la Parra, AM’12, PhD’17. Although it takes an average of 45 days to fill a position, their research showed the majority of the hiring process is devoted to screening and interviewing the initial batch of candidates, rather than continuing to look through incoming applications. To conduct the study, the researchers drew on raw data from a group that operates online job-posting platforms for computer-related industries and created a database that matched 66 million applications to around eight million online job postings using second-by-second data.

A program that connects Chicago youth with summer jobs led to a decrease in violent crime arrests, new research from UChicago’s Urban Labs has found. Jonathan Davis, AB’09, PhD’16, a doctoral fellow at the Crime Lab and Education Lab, and the University of Michigan’s Sara Heller, PhD’13, coauthored the National Bureau of Economic Research working paper, published in May. Davis and Heller followed participants in One Summer Chicago Plus, which provides teens and young adults with six-week minimum-wage jobs, mentoring, and social-emotional training. The program did not affect participants’ academic performance, but it led to a 33 percent reduction in violent crime arrests for participants in the two to three years following the program. Among younger school-going participants, One Summer Chicago Plus increased formal employment rates by 40 percent.

The latest breakthrough in gene therapy is only skin deep. In the August 3 Cell Stem Cell, a team led by assistant professor Xiaoyang Wu used genetically engineered cells to treat obesity and type 2 diabetes in mice. They focused on a gene that produces glucagon-like peptide 1 (GLP1), a hormone that triggers the pancreas to release insulin and can reduce appetite. The GLP1 gene was modified—to increase the hormone’s half-life and to attach a tool that allowed the gene to be turned on and off— then inserted into skin cells and grafted onto mice. Mice with the modified GLP1 hormones gained less weight and had lower blood glucose levels and higher insulin levels than the control group. Administering gene therapy by skin may offer “a long-term safe option for the treatment of many diseases,” Wu says.