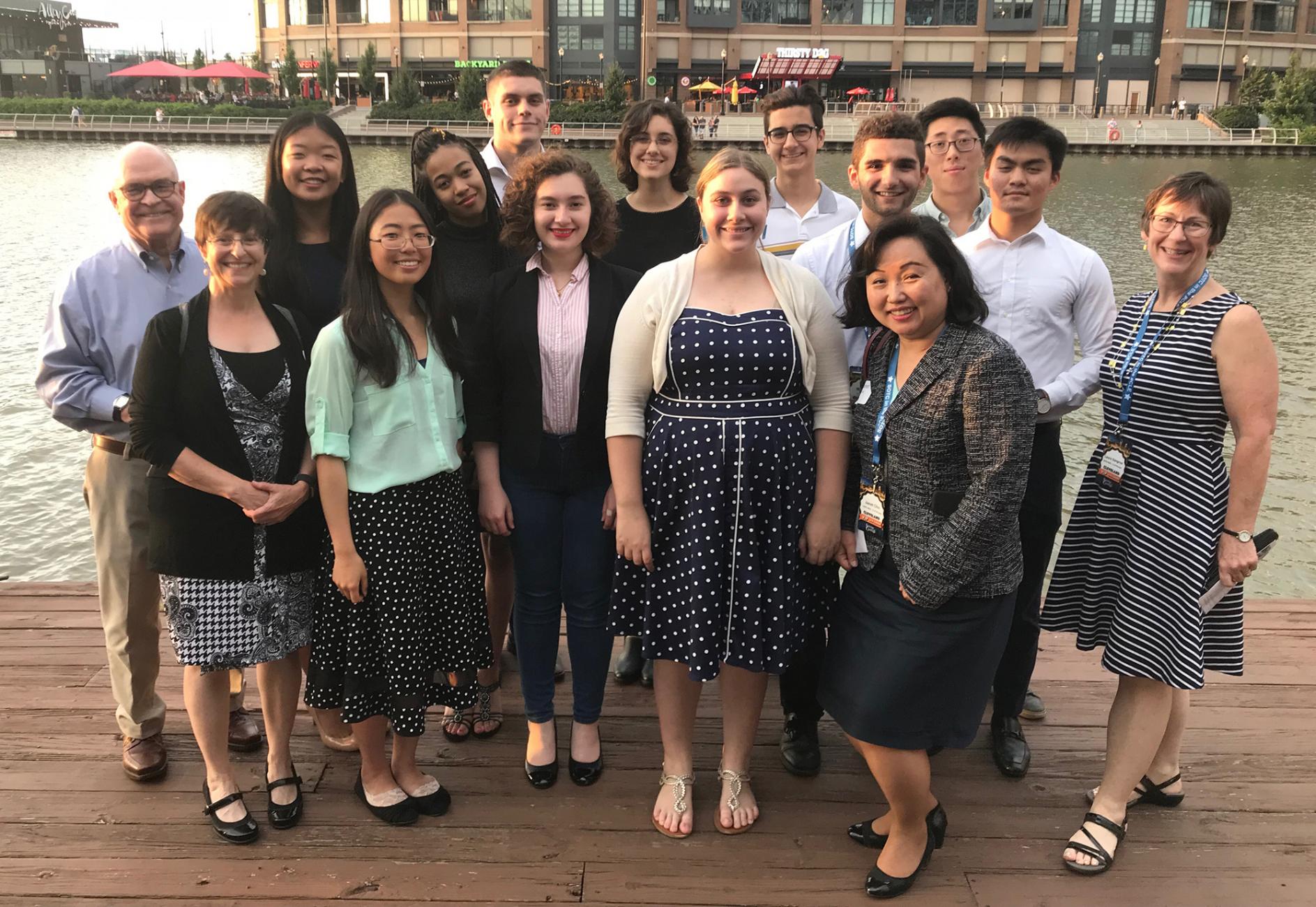 UChicago students and alumni celebrate together at the 2018 Summer on the Cuyahoga closing reception. (Photography by Anna Chalfin)

Emily Truong, AB’17, didn’t always think of Cleveland as her dream destination after college, but it turns out Ohio was the perfect place to jumpstart her career.

A native of suburban Brook Park, Ohio, Truong participated in a unique University of Chicago career program in Cleveland that helped her see her hometown in a new light.

It started when she attended a career trek organized by UChicago’s Office of Career Advancement. During that experience, Truong visited potential employers in Cleveland’s vibrant start-up and biotech sectors.

“In high school, I definitely didn’t have any wish to stay in northeast Ohio. But I gained a different perspective on my hometown,” Truong says. “Far from being a city with little opportunity, Cleveland was a place that was growing and being revitalized.”

SOTC partners with Cleveland employers and eight universities throughout the country to offer paid internship experiences for 65 to 75 college students each year. SOTC’s goal is to attract graduates to full-time jobs in Cleveland.

In addition to project-based internships, SOTC offers free housing for all interns at Cleveland State University and organizes enrichment experiences to immerse them in downtown living.

Truong participated for three summers in a row. For the first two, she interned at College Now Greater Cleveland, a nonprofit that helps students achieve college and career success, and then worked for Cuyahoga Community College, the oldest and largest public college in the state of Ohio, during her third summer.

“All were fantastic experiences and I learned a lot during them,” Truong says. “Although I grew up around Cleveland, there was a lot about the city I had yet to explore.”

Today Truong is working full time in the Cleveland metro area as an operations associate at Equity Trust Company.

Truong’s experiences were possible thanks to the UChicago alumni community in Cleveland, which is working hard to bring more UChicago students to the city.

UChicago’s participation in SOTC began with a conversation at an alumni event. Joan Spoerl, AB’85, the current president of the Alumni Club of Ohio, learned about it from Michael Schoop, AB’89.

“I really fell in love with Cleveland after I moved here,” Spoerl recalled. “This is the city where Rockefeller started Standard Oil and built the fortune that allowed him to invest in the University of Chicago. This is a place with a thriving culture where students can make a difference, where they can take chances and bounce back if they fail.”

The alumni community partnered with the College and Career Advancement to secure financial support from the Jeff Metcalf Internship Program, which provides more than 2,500 paid internships for UChicago students each year.

UChicago sent its first intern to Cleveland in 2008, and the SOTC Program has since provided more than 75 internships to College students. This summer, there are 15 UChicago interns in Cleveland, including 11 SOTC interns.

“The Cleveland alumni community has been an incredible resource for our students,” says Meredith Daw, associate vice president and executive director of Career Advancement. “From hiring interns to serving as mentors, they always go the extra mile to support our undergraduates. We could not ask for better partners.”

Local alumni volunteer to serve as mentors for the interns and organize social and cultural activities for them. One volunteer is Janet Cho, AB’90, who also serves as president of the SOTC board of directors.

“SOTC enables proud alumni like me to show off the city we love to students with the talent and brainpower to transform Cleveland,” said Cho. “For the students, this is a chance to work for some terrific employers and meet smart peers from around the world.”

The Cleveland alumni say they are just getting started.

“Over our first 15 years, more than 160 SOTC graduates from our partner universities have come back to Cleveland after graduation, and more said they would move here for the right opportunity,” Cho says. “We’d like that trend and those numbers to continue growing.”

UChicago has also expanded its summer programming in the region. In August 2018, Career Advancement organized a special Cleveland trek that exposed students to the wide breadth of opportunities in the city.

In addition, the University hosted its first UChicago Launchpad reception in Cleveland this summer. Launchpad events bring together local alumni, students, and their families to celebrate the year’s accomplishments and welcome incoming College students to the UChicago family. Paul Harris, AB’80, generously sponsored the Cleveland event.

It’s not just Cleveland that’s seen opportunities multiply for students and graduates of the College. Alumni enthusiasm is fueling similar booms throughout the world.

In California, for instance, there was a 27 percent increase in Metcalf Internships within just one year, and four career treks in the 2017-18 academic year alone. There has been similar growth in Hong Kong, with Metcalf internships increasing by 57 percent in a single year.

“UChicago’s network of alumni and families throughout the world is a key enabler for our students’ success,” says Daw. “It’s a pattern we’ve seen again and again: when our alumni get involved, our students thrive.”

To learn more or get involved with Career Advancement programming, please visit careeradvancement.uchicago.edu. For more information on the Summer on the Cuyahoga Program, please visit summeronthecuyahoga.com.

Dan Moore, AB’13, is associate director of external relations and strategic writing at the University’s Office of Career Advancement. Allana Tachauer, LAB’07, is a media freelancer based in Chicago whose clients include the Miami Heat and the University of Chicago.