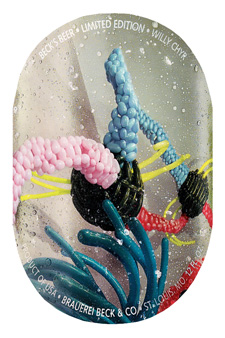 Artist Willy Chyr, AB’09, who makes intricate balloon sculptures, was one of six artists selected by Beck’s beer to design a label for its series of limited-edition art bottles. The 24-year-old Chyr, who lives in Chicago’s Logan Square neighborhood, called his balloon sculpture A Glimpse of Something Ephemeral, which can be seen on bottles through July. As he told the Chicago Reader in May, “I took my main inspiration from electron microscope photographs that you often find in old science textbooks. I wanted the image to look strange and unfamiliar at first, but when you look closer, you realize it’s made out of balloons.”

Dmitri Krushnic, AB’97—the Supernatural costar who goes by the stage name Misha Collins—may play a fallen angel on TV, but he is not so bad in real life. The actor led his large Twitter fan base (as of June he had 468,000 followers) to raise almost $500,000 to help rebuild Haiti. In June, according to USA Today, Collins traveled to Haiti with 22 Twitter fans, who each had raised at least $5,000 via the online fundraising site crowdrise.com. This trip was his second: in July 2011 he and several fans built a dental clinic there.

In late June Gretchen Young, AB’84, AM’84, formerly vice president and executive editor at Hyperion Books (and subject of a Mar–Apr/12 Magazine feature), joined Grand Central Publishing, an imprint of Hachette Book Group. She has the same title at Grand Central.

Claire Scanlon, AB’93, an editor on the NBC sitcom The Office, directed her first episode of the show. Called “Angry Andy,” the episode aired in April. Scanlon, who has been nominated for Emmy Awards for her editing, is also an editor on documentary films such as The Wrecking Crew (2008), about a group of prolific Los Angeles studio musicians in the 1960s.

Claudia Goldin, AM’69, PhD’72, an economics professor at Harvard, has been named president-elect of the American Economic Association, the third woman president in the association’s history.  A labor economist and economic historian, Goldin will begin her term in 2013.

In January Gilad “Roz” Rosner, AB’95, received a Technology and Engineering Emmy Award for helping to design, prototype, and manufacture the world’s first robotic video-migration system, SAMMA (System for the Automated Migration of Media Assets). Rosner is a PhD student at the University of Nottingham, where he studies information policy and digital identity.

In July Brian Fahey, AB’82, a freelance sports-television associate director and writer, travels to London to cover the 2012 Summer Olympics. For the past five Olympic Games, he has covered the event for NBC, winning seven National Sports Emmy Awards.

As a student in the Law School, Karl Leonard, JD’09, participated in the Law School’s Exoneration Project, which  represents clients convicted of crimes of which they are innocent. One client he represented: James Kluppelberg, wrongfully convicted and sentenced to life in prison for setting a 1984 fire that killed  six people. In late May Kluppelberg was released from the Menard Correctional Center in southern Illinois. Working with Leonard, now an associate at Winston & Strawn in Chicago, were Ashley Schumacher and Cadence Mertz, both JD’08.

Jon Kern, AB’02, a staff writer for The Simpsons, won the 2012 Laurents/Hatcher Foundation Award for his play Modern Terrorism, a dark comedy about young terrorists. Along with the award, Kern received $50,000, and New York’s Second Stage Theatre, where the play premieres in September, received $100,000 toward its production.
University News