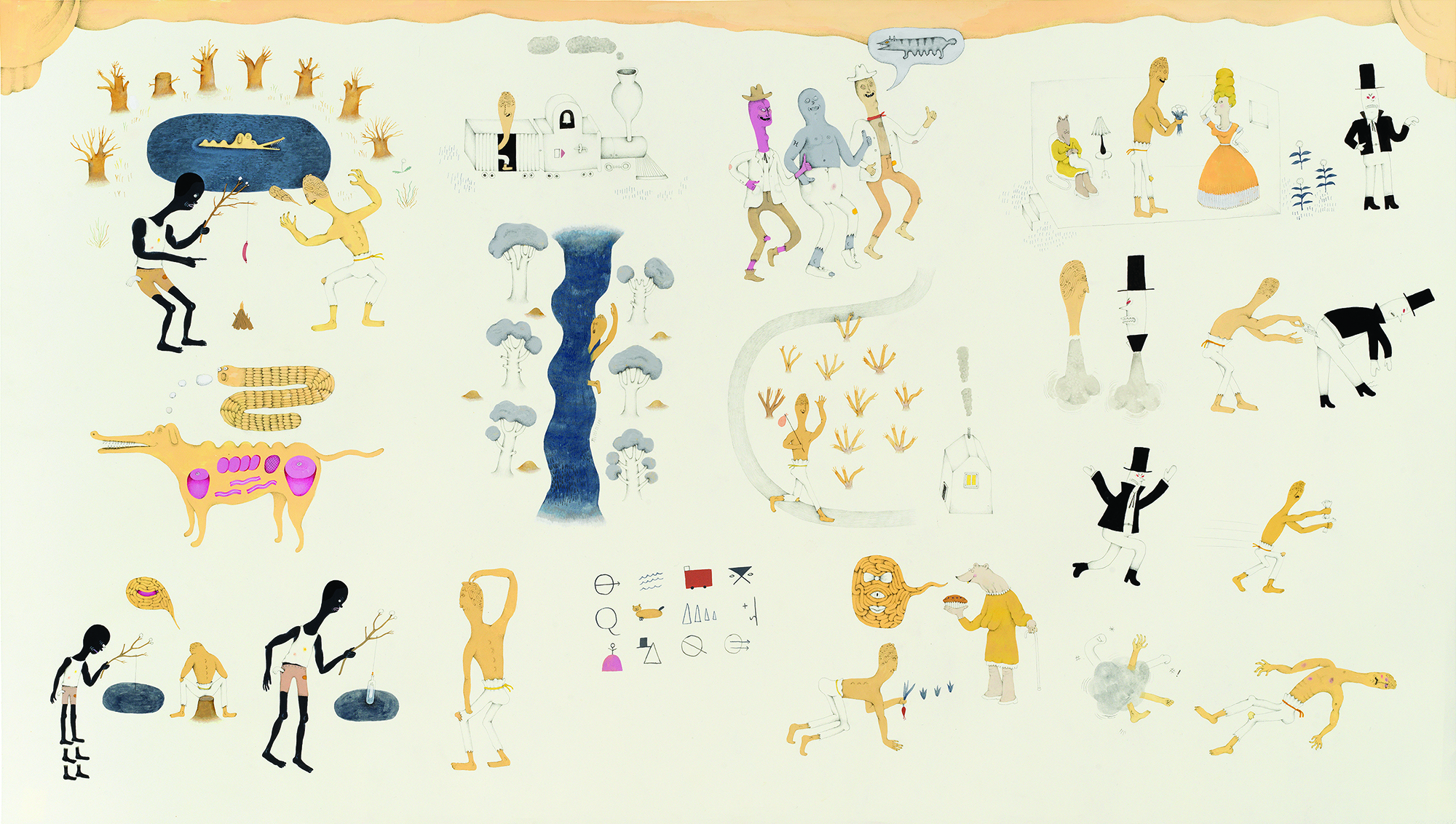 From March 2 to April 28 the Zg Gallery in Chicago held the first solo exhibition of visual artist Clare Rosean, MFA’12. Middle West: New Paintings and Works on Paper featured paintings and drawings that Rosean says “illustrate the personal and shared anxieties of a lifelong Midwesterner,” including the mixed media work Hobo Code (above). Newcity listed Rosean’s exhibition as one of its top five art shows in Chicago in March, calling her work “playful and eerie.” Rosean credits her dreamlike visual style to comic art and medieval Sienese painting.

In 1956 Timuel Black, AM’54, brought Martin Luther King Jr. to campus for what would be his first major speech in Chicago. In 1963 Black organized the Freedom Trains that took Chicagoans to the March on Washington, where they heard King deliver his “I Have a Dream” speech. And this February, the South Side community where Black grew up celebrated him as a local icon of the US civil rights tradition. At a Black History Month ceremony at the Walter H. Dyett High School for the Arts in Washington Park, Black was presented with the school’s inaugural Honorary Eagle Award “for his continuous fight for Civil Rights, and his commitment to preserving Bronzeville’s rich history and legacy.” Black’s two-volume oral history of the Great Migration to Chicago is called Bridges of Memory (Northwestern University Press, 2003 and 2007).

At this year’s Sundance Film Festival, Time Share (2018), cowritten and produced by Julio Chavezmontes, AB’05, won the Special Jury Award for screenwriting in the category World Cinema Dramatic. Chavezmontes established his reputation as a leading Mexican filmmaker in 2012 with the horror film Halley, nominated for several Ariel Awards, Mexico’s equivalent of the Oscars. Time Share tells the story of two fathers who become convinced an American timeshare conglomerate is plotting against their families. The film is currently being marketed for US and international release.

At a ceremony held in March, the University of North Alabama (UNA) honored Wendell W. Gunn, MBA’71, by officially renaming its commons building the Wendell W. Gunn University Commons. Gunn was the first black student ever to enroll at UNA, then called Florence State College, where he earned a bachelor’s degree in chemistry and mathematics in 1965. After making history as the student who integrated UNA, Gunn pursued a career in politics and business. He was an international trade adviser to President Ronald Reagan and later founded Gunn Solutions, a technology company that provides consulting services to institutional investment managers.

John E. Whitley, AM’98, PhD’00, was nominated to be assistant secretary of the Army by President Donald J. Trump on February 2. Whitley, an Army veteran with experience in the Department of Homeland Security and the Office of the Secretary of Defense, was a faculty member at George Washington University’s Trachtenberg School of Public Policy and Public Administration before becoming a senior fellow at the Institute for Defense Analyses in Virginia.

The 2018 Pulitzer Prize for Drama was awarded in April to Martyna Majok, AB’07, for her play Cost of Living, about two relationships involving a person with a disability. In January Majok also became the first woman to receive the Greenfield Prize, awarded jointly by the Philadelphia-based Greenfield Foundation and the Hermitage Artist Retreat in Englewood, Florida. The prize includes a $30,000 commission for a new work and additional support for its writing and production. Majok plans to write a musical about friends who struggle with life as refugees after growing up near the Chernobyl nuclear disaster area. Her most recent play, queens, about two generations of immigrant women living in Queens, premiered in March at the Claire Tow Theater at Lincoln Center.