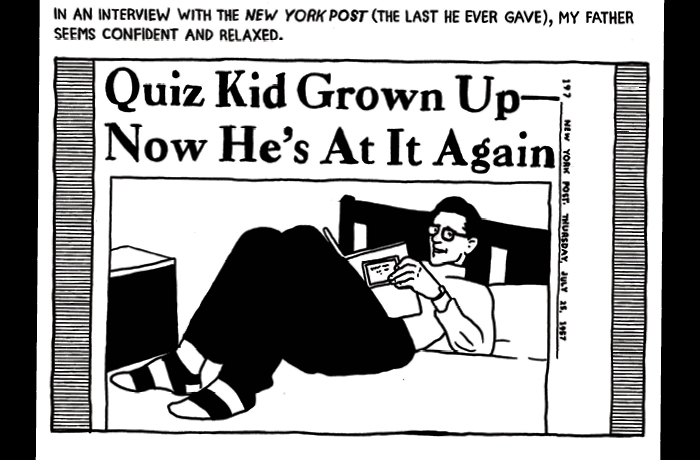 (Illustration by Michael Kupperman from All the Answers [Gallery 13, 2018]; Courtesy Gallery 13)

The daily interview show hosted by Louis “Studs” Terkel, PhB’32, JD’34, on Chicago’s WFMT radio station for nearly half a century migrated online in May. Launched by WFMT and the Chicago History Museum, the Studs Terkel Radio Archive encompasses a digital platform, where users can hear the thousands of programs he recorded between 1952 and 1997, including conversations with Martin Luther King Jr., Louis Armstrong, and Maya Angelou, as well as initiatives to engage the public with Terkel’s work. For example, Bughouse Square, a podcast hosted by Eve L. Ewing, AB’08, and launching in August, mixes Terkel’s recordings with Ewing’s commentary and her own interviews.

Cost of the cause

Criminal defense attorney and prisoners’ rights activist Fay Stender, JD’56, who died in 1980, is profiled in the new biography Call Me Phaedra: The Life and Times of Movement Lawyer Fay Stender (Regent Press, 2018). Written by attorney and former judge Lise Pearlman, it depicts Stender as a courageous fighter for justice in her defense of high-profile convicted militants such as Huey P. Newton and George Jackson—but also as the kind of tragic figure alluded to in the title, driven to suicide by the fate she suffered at the hands of the Black Guerilla Family.

Democracy and its discontents

Vivien A. Schmidt, AM’73, PhD’81, a professor of international relations and political science at Boston University’s Frederick S. Pardee School of Global Studies, was awarded a 2018 Guggenheim Fellowship to study the rise of populist leaders in Europe and the United States in recent years. Schmidt intends to interview major populist figures on both sides of the Atlantic for a book on what she calls the “rhetoric of discontent,” looking to the language of populism to answer “why now, in this way, in these places.” Later this year Schmidt will be decorated as a chevalier in the French Legion of Honor for contributing to the advancement of French art and culture.

Americans and the Holocaust, a 25th-anniversary special exhibition at the US Holocaust Memorial Museum, features the research of Stephen J. Morewitz, PhD’83, on the SS Quanza controversy, a 1940 incident in which Jewish refugees from Europe were denied safe harbor in Veracruz, Mexico, and Norfolk, VA, until legal action on their behalf prompted the US State Department to intercede. Morewitz, a lecturer in nursing and health science at California State University East Bay, is coauthor, with Susan Lieberman, of the play Steamship Quanza, which premiered at Chicago Dramatists in 1991.

Jennifer Chang, AB’98, assistant professor of English at George Washington University, received this year’s William Carlos Williams Award from the Poetry Society of America for her collection of poems Some Say the Lark (Alice James Books, 2017). The award recognizes a single-author poetry volume from a small, nonprofit, or university press. Chang’s book was cited by poet Paisley Rekdal for capturing “the ways that words suggest and yet finally never do encapsulate the ultimate strangeness of the world in which each body—whether human or animal—is ultimately unknowable.”

All sides to the story

Tracy Mumford, AB’10, won a Peabody Award in May as part of the team that created 74 Seconds, a Minnesota Public Radio podcast about Philando Castile and the police officer who was charged in his 2016 fatal shooting. Mumford, a digital producer at MPR, was a producer, reporter, and host on the podcast, which was recognized by the Peabody Board of Jurors “for the model it offers us of how to comprehensively cover incidents of police violence.”

Rise to the top

In July David Hoffman, MBA’98, was named CEO of Dunkin’ Brands, the parent company of Dunkin’ Donuts and Baskin-Robbins. Hoffman became president of Dunkin’ Donuts US and Canada in 2016 after holding various leadership positions at McDonald’s. “I grew up in the restaurants,” Hoffman said after his new appointment was announced. “It was burgers and fries at 16 and it’s donuts at 50.”

Joel Kupperman, AB’54, SB’55, AM’56, professor emeritus of philosophy at the University of Connecticut, is the subject of All the Answers (Gallery 13, 2018), a graphic memoir by his son Michael. Famous during World War II as a child prodigy on the NBC radio show Quiz Kids, Kupperman stayed to see the program break into television but left at age 16 for UChicago, returning to show business only once for what the book presents as a fateful 1957 appearance on The $64,000 Challenge. All the Answers traces how a philosopher exploring ethics, morality, and character emerged from the trauma of childhood celebrity.