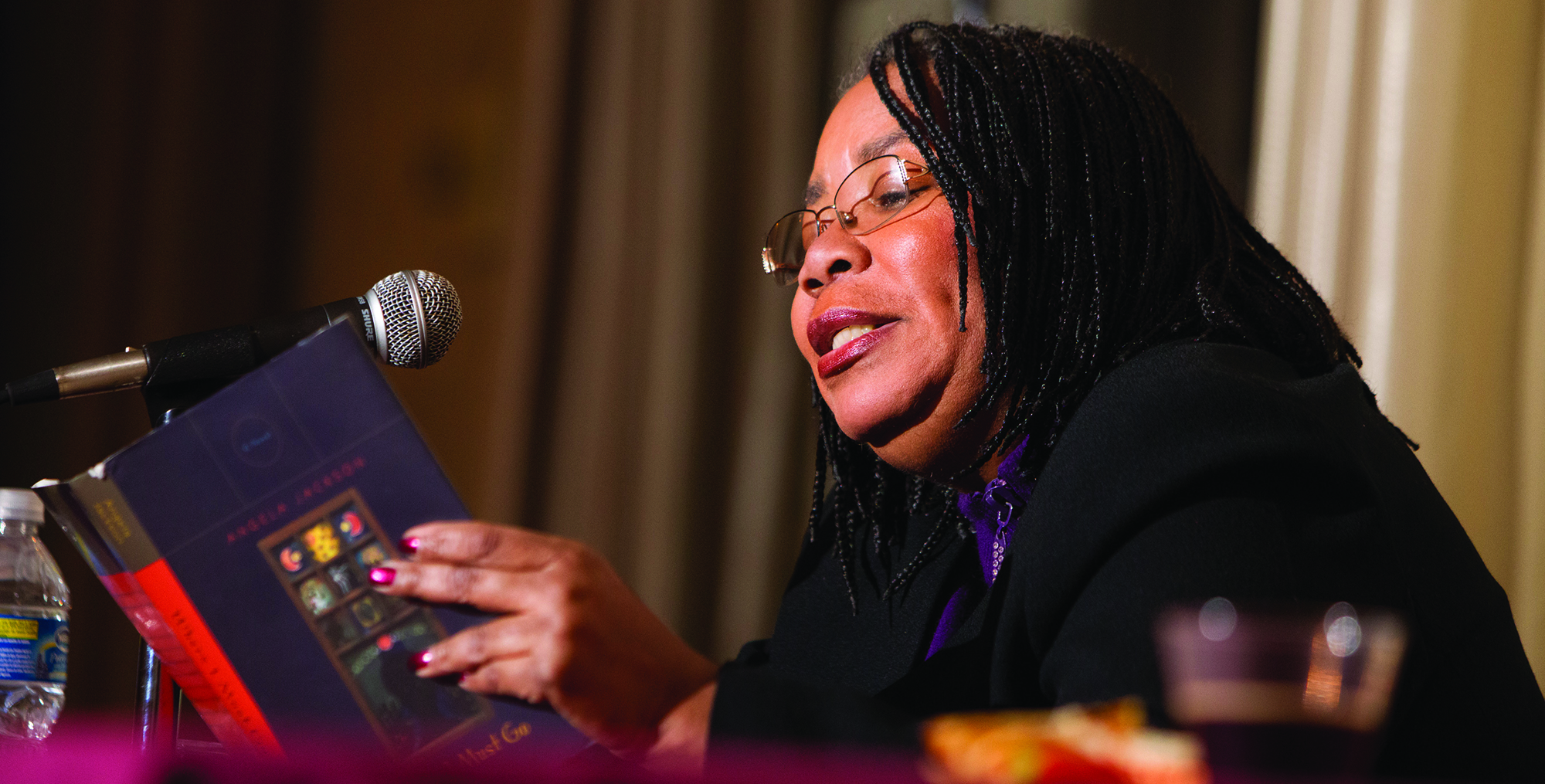 In November Angela Jackson, AM’95, was named poet laureate of Illinois—the fifth one in the state’s history. (Photography by Jason Smith)

Poetry for the people

In November Angela Jackson, AM’95, was named poet laureate of Illinois. “I know her words will have a profound impact on the residents of our state as well as the next generation of aspiring poets,” said Governor J. B. Pritzker in appointing Jackson to the role. Only the fifth poet laureate in Illinois history, Jackson hopes to enlist young ambassadors to help promote poetry in schools. “I want to awaken the poets, in young people especially, so they will be lifelong readers of poets, and potentially poets themselves,” said Jackson, whose own collections include the Pulitzer Prize–nominated It Seems Like a Mighty Long Time (TriQuarterly Books/Northwestern University Press, 2015).

Judith Mintel, AB’70, JD’73, and her late husband, Richard Mintel, SB’60, PhD’65, recorded classical music performances in Chicago for decades, producing an archive that was recently added to the Library of Congress’s recorded sound collections. Containing more than 350 hours of music captured between 1974 and Richard’s death in 2014, the archive principally documents rehearsals and concerts by the Music of the Baroque chorus and orchestra, founded in Hyde Park in 1972—the year Richard, then a UChicago biochemist, won a Quantrell Award for Excellence in Undergraduate Teaching. “As to the quality of the performances and the engineering, you could put this collection up against anything in the world that’s ever been made,” notes WFMT’s Peter van de Graaff. Selections can be heard at mintel.org.

US representative Andy Kim (D-NJ) made headlines for helping clean the Capitol of debris after rioters stormed the building in a violent insurrection on January 6. Kim, AB’04, returned to the House chamber at 9 p.m. for a resumed count of electoral votes from the November election, and afterward found the Capitol rotunda strewn with tattered flags, cigarette butts, food, and discarded body armor, he told GQ. He obtained a roll of garbage bags from nearby police and until 3 a.m. devoted the time he didn’t spend on the House floor to a quiet act of service throughout the Capitol: “I wanted to show that building respect, because this is bigger than all of us.”

Hands across the sky

As a Peace Corps volunteer from 1966 to 1968, Sandra Nathan, AB’66, MST’69, taught English to high school girls in Chuncheon, South Korea. Last year she was among 514 former teachers and health care workers who received a token of gratitude from the South Korean government in the form of what officials called a COVID-19 survival box, reported the New York Times in November. The care package contained gloves, ginseng candies, and 100 masks, among other items. Now a retired civil rights and labor lawyer, Nathan said, “It was as if this box had been traveling to me since 1968. ... Some people, Korean people, very far away wanted to make sure that I was OK; that I had what I needed to fight a bad disease. They behaved as though they cared and were responsible for me.”

On January 20, the day of President Joe Biden’s inauguration, Avril D. Haines, AB’92, was confirmed to serve as director of national intelligence. The first of Biden’s cabinet-level appointees to receive Senate confirmation, Haines becomes the first woman to occupy the top office in US intelligence. During former President Barack Obama’s second term, the UChicago physics major and Georgetown University Law Center graduate broke another barrier as the first woman to serve as CIA deputy director. She has taken a leave from Columbia World Projects for her role in the new administration. “When it comes to intelligence,” Haines said during her confirmation hearing, “there is simply no place for politics, ever.”

David A. Kessler, JD’78, has been named chief science officer for COVID-19 response by President Joe Biden. At the time of the January announcement, Kessler was serving as cochair of the Biden transition team’s pre-inauguration COVID-19 advisory board, tasked with helping plan a robust federal response to the virus. As head of vaccine science in the new administration, Kessler joins a team leading the program previously known as Operation Warp Speed, overseeing the review and approval of COVID-19 vaccines and antiviral treatments. He also aims to improve the nation’s manufacturing capacity for vaccines and tests. Kessler previously served as Food and Drug Administration commissioner in the George H. W. Bush and Bill Clinton administrations and worked on the development of HIV/AIDS treatments.