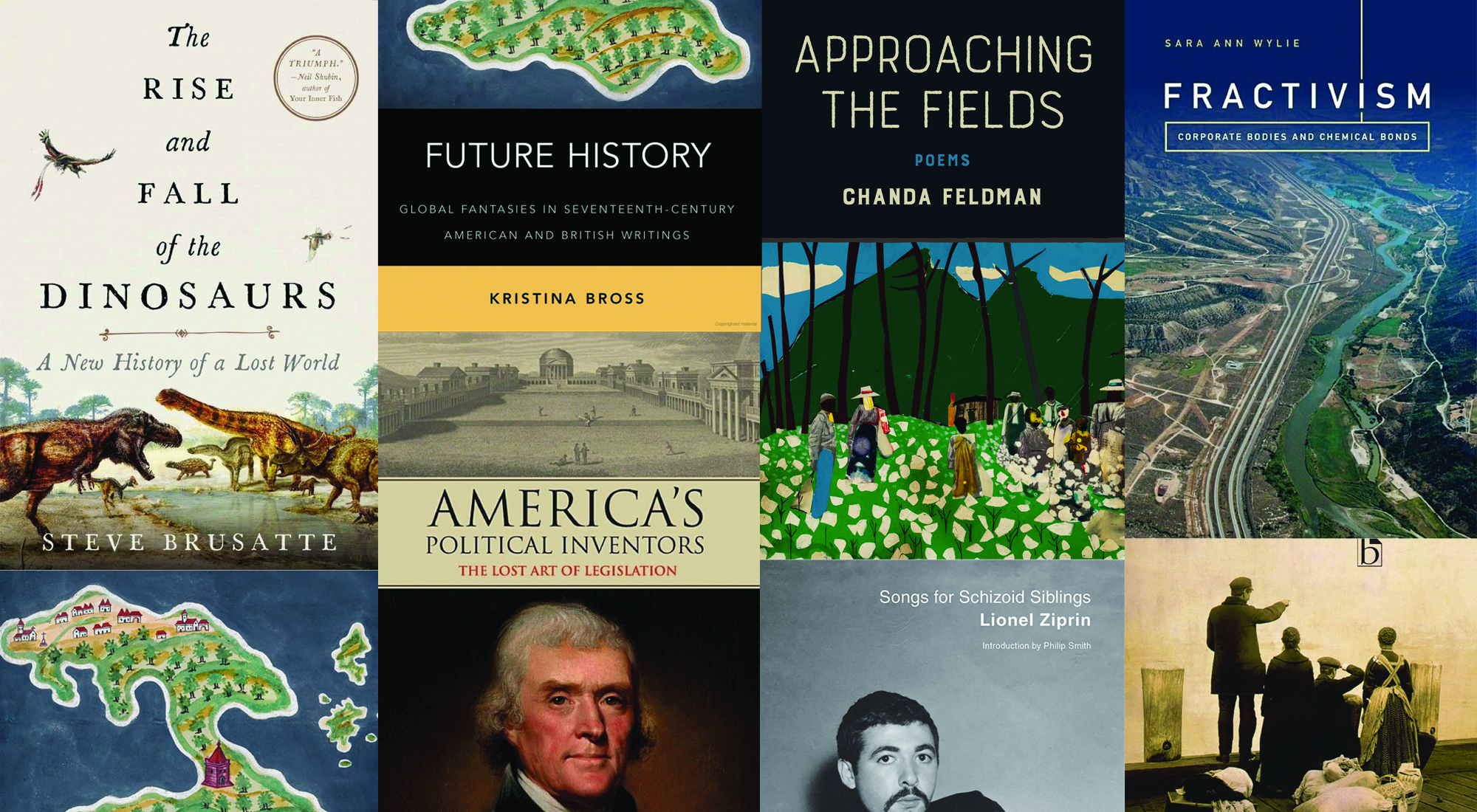 In the interregnum England planned what became often violent ventures to conquer, colonize, or take possession of lands in the Americas and East Indies. Kristina Bross, associate professor of English at Purdue University, examines how a range of mid-17th-century texts, from astrological almanacs and pamphlets of millenarian prophecy to missionary tracts and colonialist propaganda, helped lay groundwork for the British Empire by other means: envisioning a world of global interconnection.

The Rise and Fall of the Dinosaurs: A New History of a Lost World

The T. Rex, Triceratops, and Brachiosaurus that Hollywood turned into screen legends represent only a few characters in a cast of hundreds of known dinosaurs. Steve Brusatte, a reader in vertebrate paleontology at the University of Edinburgh, tells the fuller story here. His narrative history of the dinosaurs traverses more than 200 million years from origins to extinction. Intertwined are Brusatte’s firsthand accounts of excavations across the globe and discoveries he has helped add to the record.

When he died in 2009, poet and Jewish mystic Lionel Ziprin left behind a trove of mostly unpublished work in his home on Manhattan’s Lower East Side, where he played host for decades to artists and writers attracted to the esoteric side of New York City’s cultural underground. Prepared from the original typescript by editor, curator, and bookseller Philip Smith, Songs for Schizoid Siblings is the first book by Ziprin to emerge posthumously from the author’s archive, and only the second of his books ever published. A linked series of nearly 300 poems mixing Kabbala, nursery rhymes, nonsense poetry, and Beat experimentalism, this avant-garde text shows its roots in Jewish tradition.

After the United States entered World War I, its government created emergency institutions to organize a war economy, establishing a political model based on the allocation of resources to interest groups that is still with us today. According to historian and lawyer George W. Liebmann, this model has left the United States ill-equipped to pass major new public policy legislation addressed to the citizenry at large. His models for a different future range from John Winthrop’s foundation of New England towns in the 17th century to Byron Hanke’s development of residential community associations in the 20th.

Israel Zangwill’s drama The Melting Pot debuted on the American stage in 1908, intervening in turn-of-the-century debates about immigration and nationhood with the story of David Quixano, a Russian Jew who has survived the Kishinev pogrom and embraces America as a place of ethnic assimilation. In this critical edition, Meri-Jane Rochelson, professor emerita of English at Florida International University, suggests Zangwill’s play is relevant to our own contemporary debates about immigration and diversity, while presenting supplemental readings that illuminate why it sparked controversy in its own time.

Approaching the Fields is the first full-length collection of poetry by Chanda Feldman, visiting assistant professor of creative writing at Oberlin College. Imbuing memory into the Southern US landscape, these poems of place interweave narratives of personal identity, family history, and the larger African American experience in scenes of individual witness and reflection. The collection’s penultimate section, “But We Lived,” is a sequence based on family stories in and immediately after Jim Crow–era segregation in the South.

While unconventional oil and gas extraction is upheld by US industry leaders and regulators as a path to the energy economy of the future, debates over fracking’s human and environmental consequences are playing out in states across the country. New forms of grassroots activism around the practice are also on the rise. Sara Ann Wylie, assistant professor of sociology, anthropology, and health sciences at Northeastern University, documents the work of nonprofits and academic research groups that help affected communities gather data and participate in the public debates.