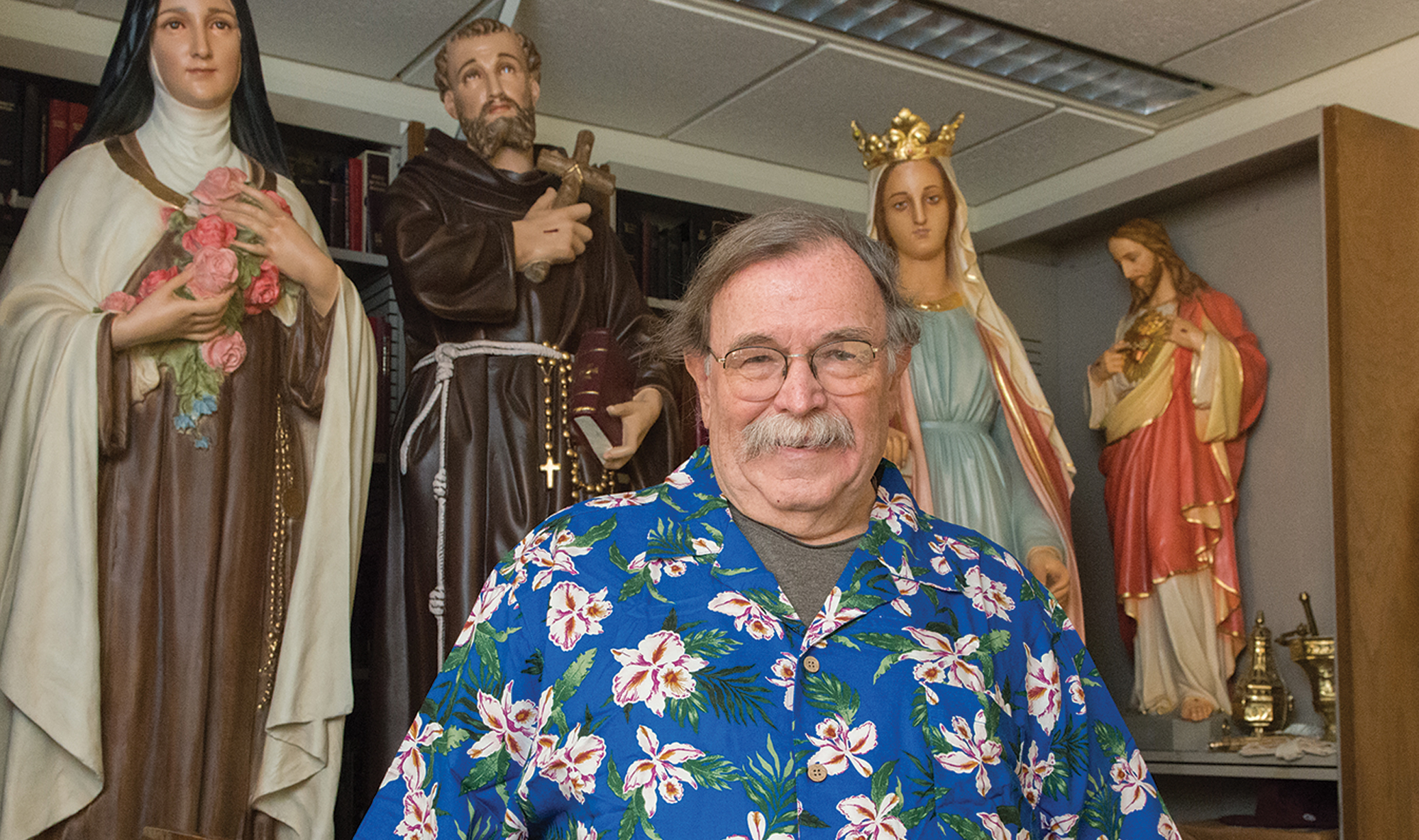 During his decades in the Reg, Gadke has supervised dozens of student workers, nicknamed “Ray’s Rangers.” They include Byron Trott, AB’81, MBA’82, who established the Metcalf Internship Program. (Photography by Joe Sterbenc)

The Regenstein’s Ray Gadke, AM’66, explains his unusual office decor.

Even if you don’t recognize the name Ray Gadke, AM’66, alumni of the past few decades will surely recognize his mustachioed, aloha-shirt-clad figure on sight in the Regenstein Library. Students and faculty who venture to Gadke’s space on the third floor in search of the microforms department are treated to a puzzling glimpse through the windows of his office: wood and plaster statues of saints and other religious figures.

Gadke came to the University in 1965 as a graduate student in history. His studies on immigrant religious communities led him to visit Catholic and Lutheran churches in the city. One day in the early 1980s, a Catholic priest of his acquaintance (he no longer remembers who) whose church was closing called to ask, “Do you know anyone that would be interested in statues from my church?” Gadke said, “Hey, that’s an idea.” Today his collection numbers roughly 40 statues, with 10 on display in Regenstein.

Statue makers would commonly use a generic torso, then give it attributes that would identify it as a particular figure. Gadke has one in his office that depicts a generic bishop, but “the hands are removable,” he points out. Just swap out a hand for one carrying a shamrock, paint the cloak green, and voila—St. Patrick.

Manufacturers had no problem selling to any church that wanted their wares. “I’ve been in Lutheran churches in Wisconsin where Christ is in the middle and they have Peter and Paul on either side, and those are identical to the statues of Peter and Paul that you’d find in a Catholic church.”

His oldest and largest statues are a seven-foot-high German-made pair from the 1850s, depicting Saints Peter and Augustine. The newest is one of St. Thérèse of Lisieux, commissioned by a Catholic church that ended up not buying it.

“You get to the point where by going into a church you can kind of tell what the ethnic background is,” Gadke explains. Scandinavian churches would order statues of Christ and the saints with fair hair and blue eyes; French and Italian churches depicted saints with olive skin and brown eyes. Irish churches had very plain, understated statues, whereas in Latin America, statues would display great emotion. There, he says, “Mary is shown as the mother of sorrows, with tears streaming down her face. Christ is drenched in blood. … The faces are stretched in agony.”

On the future of his collection:

“The time is going to come when I retire and I don’t have room for all of these at home, and so they’ll be distributed,” Gadke says. (He’s already donated several to local Catholic churches and schools.) “In my will, I’ve written that whatever I have left will go back to the Archdiocese of Chicago, and they can distribute them as they see fit.”

On his corner of the Reg:

“Because it’s out of the way, a lot of Muslim students come and pray in that back corner of the microfilm room,” near his office. “I consider this kind of the spiritual part of the library.”

On whether there are many collectors with the same interest: