Students and bartenders hang out in the Pub (above); portrait of Ed Martin (below). (Photography by Eric Buether/courtesy Chicago Maroon, University of Chicago Photographic Archive, apf7-02466, Special Collections Research Center, University of Chicago Library [above]; photo courtesy Ed Martin [below])
Trivial matters
Ed Martin, one of the moderators of the Pub’s trivia night, sits down and talks about his experiences.
By
Author
Minna Jaffery, AB’15
|
Web exclusives
—

Ed Martin, senior supervising manuscript editor at the University of Chicago Press, recently retired from his other job: moderating Pub Trivia. Started in 2002, Pub Trivia has been a mainstay on Tuesday nights at the Pub in the basement of Ida Noyes. In an interview with the Magazine edited and adapted below, Martin reflects on his six-year career as a trivia moderator. 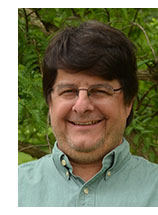 On writing questions Everyone has a different process. What we’ve told people is always be looking for stuff. After a while, you hear something or you read something and you think, “Oh, that’d be a good trivia question,” you jot it down. I had a long list of stuff, and after a while, I ran through it. And everyone does it different.

Each week, it’s five different people writing. If I were stuck for something, I’d look at this-date-in-history stuff, and it wouldn’t necessarily be a history question but it’d be a topic. Sometimes it’ll give me a name and I could run down that name. Sometimes it’ll give me a topic—births, deaths, events, that kind of thing. There were some things I had a great store of questions for, a whole lot of things I never got around to asking, because it was mostly sports questions.

There’s a vast amount of sports trivia; we try to go easy on that. Most other pub trivia nights are pretty heavily sports related, and we try to not do that. There is stuff here that you won’t hear in any other bar anywhere, and that’s a point of pride. It makes it unique.

On the caliber of the questions They’re probably more difficult over time I think, partly because you don’t want to repeat any questions, and partly because the thing that got you booed was if you asked a question that was too easy. People would actually start groaning, so we tried very hard to avoid that. There’d be nights when the scores were really terrible and we’d feel really bad about it. When we took over moderating, the people who’d done it before said the ideal is that half the questions get answered correctly. The idea is to get an average of four in a round [of eight questions]. We’ve had rounds where we average under two; it’s really too hard. It’s tricky to find that spot though.

Students contesting answers People come up a lot. Of course you’re in a room with somebody who’s liable to be the world’s expert on something or is about to become that, and sometimes we trip over stuff. We try hard to make sure that there’s only one correct answer. Sometimes you’re confronted with somebody who’s in the middle of writing their dissertation on that very thing, and you just have to say yes. We always keep a laptop open so we can Google things and try to look things up for people if they give us a good reason. We’ll have to admit, yeah, sometimes they’re right, and we’ll give credit for that.

Favorite questions “Who was the first president to be photographed as president?” The truth of the matter is it’s just very hard, but it’s cool to know. Every once in a while we’ll find a fact that is so cool, and even though you know that hardly anybody knows it, you just want them to know, so you ask. My favorite question of all time was, “Rank the following four cities from north to south: San Francisco, Salt Lake City, St. Louis, and Philadelphia.”