At 105, Edythe Kirchmaier, X’34, is SSA’s oldest known former student, California’s oldest licensed driver, and—as of January—the oldest user of Facebook. Her page asks other Facebook users to grant her birthday wish: 105,000 likes for her favorite charity, Direct Relief, where she has volunteered for nearly 40 years. Since the news about Facebook’s oldest user got out, Kirchmaier has been featured on Access Hollywood, Ellen, and The Tonight Show with Jay Leno. By Friday, Direct Relief had received 123,024 likes.

No. I didn’t even know what Facebook was. Direct Relief set me up. They had a hard time, because I’m too old. They had to contact Facebook, and they worked around their little gadgets and got me on. I just checked my e-mail this morning, and I have 81,111 people signed up on my Facebook. And from all over the world—Rwanda, Mozambique, every place. I have more fun, turning it on and checking the people and what they have to say. 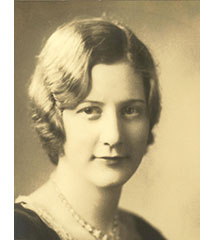 And you still volunteer at Direct Relief every Tuesday?

I’ve heard you have the best handwriting of anyone there.

I guess it’s because I’m older than the others. I learned to write differently when I was in school.

You’ve seen so much of life. Do you have any advice for the rest of us?

My advice is to live well, be positive in your thinking, don’t worry about things that you can’t change, and just be happy. Be friendly. Love people. I think love is about the greatest word in our dictionary. I think if people loved more, we’d be a much better world.

Do you have any suggestions for staying healthy?

Do you let yourself have any treats?

You were married to your husband Joe Kirchmaier, AM’37, for nearly 70 years. How do you keep a marriage going for so long?

My husband and I knew each other for just three months when we were married. I always have to add this, because people get kind of shocked. We worked in the same office, and I was his supervisor. So we had a lot of contact. We got to the point where we started eating lunch together, usually with some other people from our group, then we started going out on dates. At the end of three months, he decided he wanted to leave Chicago—1938 was one of the worst winters that Chicago has experienced. His proposal was, “I’m going to California. Would you like to come with me?” And I said, “I sure would.” We got married and left that same day. We went to California and we never looked back. We had a lot of interests in common. We both loved social work. We just got along beautifully. We had arguments, but we never went to bed on an argument. We respected each other. I think that’s very important in a marriage.
Education & Social Service
Social Media
Harris Public Policy
Interview