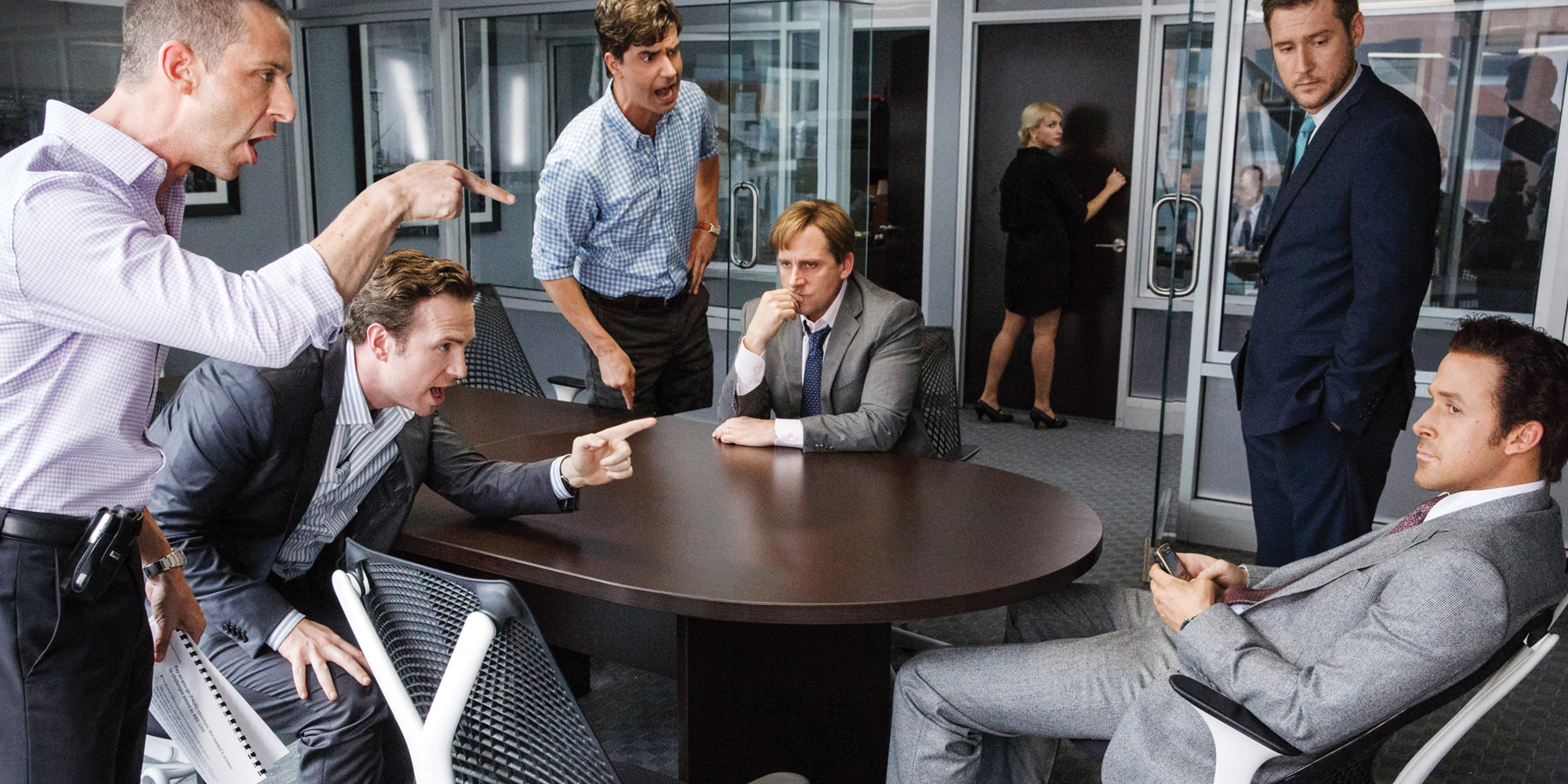 In twice-weekly lectures for Literature and the Financial Crisis of 2008, Warren could be found mashing up disquisitions on poststructuralism and median home prices. (Jaap Buitendijk/©Paramount/Courtesy Everett Collection)

On a Sunday evening in late January, students in Cobb 301 are pushing tables around, transforming the standard conversation-promoting square into rows angled to face a flat-screen TV in the corner of the classroom. Just before 5:30, Kenneth Warren, the Fairfax M. Cone Distinguished Service Professor in English, arrives with a helper and a dozen or so Giordano’s pizza boxes, salad containers, Pepsi and ginger ale two liters, and a Blu-ray of director Adam McKay’s 2015 film The Big Short.

It’s movie night for English 26249: Literature and the Financial Crisis of 2008.

Once the 30 or so students are settled in with pizza and pop, Warren, leaning against a wall, provides some food for thought as they watch the movie. He asks the class to think back to the texts on neoliberalism that comprise most of the readings thus far. (They also have Aravind Adiga’s 2008 The White Tiger [Free Press] under their belts, the first of four novels they’ll discuss this quarter.) Specifically, Warren prompts, “Are there heroes, are there villains within the system whose actions either could be more timely or more insightful”—thus preventing or ameliorating what happened in 2008—“or are we looking at something systemic, and what view that has on how we might see the film?” With that, it’s Warren’s turn to grab some pizza. And roll film.

For those who missed it or need a refresher, The Big Short follows four people—a doctor turned investment fund manager (Christian Bale), an angry-at-the-world Wall Streeter (Steve Carell), and two guys (non-marquee actors) running a hedge fund out of their garage—who each anticipated the subprime mortgage collapse and bet against, or shorted, the US housing market. This potentially dry procedural is juiced up with a restless camera and staccato editing, every scene crammed with cutaways to hip-hop videos, infomercials, news footage (stock tickers, foreclosure signs), even The Wealth of Nations—like a 50-browser-tabs-open “what caused housing crisis” Google search. Characters address the audience directly and celebrities are deployed to clarify complicated financial instruments, as when singer-actress Selena Gomez shows up playing blackjack and talking synthetic collateralized debt obligations with the “father of behavioral economics,” Chicago Booth’s Richard Thaler.

So it’s no surprise, after the movie ends, that Warren wants to spend a little time discussing “the narrative decisions that the film makes,” noting, “I get to talk to you all the time”—during the week, it’s a maxed-out 40-person lecture class—“I don’t get to hear you talk as much as I might like.”

A guy in the back is the first to chime in: “There’s a lot of visual juxtaposition, as the financial language starts to become too convoluted and specialized, with images of what’s happening to people who are getting their homes foreclosed upon.” It’s a reminder, he says, “that the thing they’re explaining trickles down to that.”

“Juxtaposition in some sense has to be a kind of strategy for the film altogether, in part because you have multiple stories,” Warren agrees, while noting that the technique isn’t new.

A young woman in a gray sweater—one of many students opting for that shade this chilly evening—suggests that when the characters break the fourth wall to comment on whether a particular incident happened the way it’s depicted, it’s to “remind you that this is a real story,” even though “there’s a lot of it that seems really absurd and hard to believe.”

“I was intrigued by the way it plays with the fantasy of wealth,” a Philip Seymour Hoffman doppelgänger says about the celebrity cameos. “It’s Anthony Bourdain in this luxury restaurant, … Margot Robbie in her luxury apartment. … It feels like there’s a set of stakes to what they’re talking about in this fantasy that is achievable if you play this game of money.”

Warren wants to make sure the class doesn’t miss a particular bit of “heavy imagery,” when Carell’s character and one of his partners go to Standard & Poor’s to ask why they’re still giving mortgage bonds solid ratings while the mortgages within them are defaulting en masse. The woman they talk to, apparently fresh from an appointment with her eye doctor, is wearing huge dark glasses—the “film obviously playing with blindness, over the refusal of the system to see what it’s doing,” Warren says. Yet, “at a crucial moment when they’re getting self-righteous with her, she takes off the glasses. What does she say at that moment?”

“She says that they’re hypocrites,” answers a woman in a (gray) UChicago sweatshirt. Warren prods: “Why is that?”

“It’s because even though they’re betting against, sort of, the corruption in the system, they’re still going to profit based on how the system works,” she explains.

“To win in this instance depends ultimately on these mortgages failing,” Warren says, asking how viewers are supposed to feel about their emotional investment in the movie’s main characters—who, after all, are just “trying to make money.” Are there heroes? Are there villains?

A woman, breaking the tacit dress code in a maroon sweatshirt, brings up the moments in which the film creates sympathy for its characters. She points to Carell’s stick-it-to-the-stock-market character at the end of the film, when the economy is in freefall, “looking like he’s about to have a breakdown instead of cheering that he’s just made a billion. The actual outcome is still the same,” she says, “it’s just how he feels about it that’s different.”

Warren, looking to sum things up, asks the class how much the investment fund of Christian Bale’s footwear-averse Dr. Michael Burry made from its shorts. The class tosses several figures back and forth before arriving at the correct amount: $2.69 billion.

That’s a question that will have to wait for that week’s lectures. In the meantime, as they begin moving tables back into a square, one of the course assistants notes that half a dozen unopened pizza boxes remain up for grabs. There’s little question that the students who seize this opportunity will return to their dorms or apartments as heroes.

Readings started with David Harvey’s A Brief History of Neoliberalism (Oxford University Press, 2005) and a selection of critical and historical essays, including “Neoliberal Aesthetics: Fried, Rancière, and the Form of the Photograph” (2011) by Walter Benn Michaels.

In addition to watching The Big Short, students were asked to listen to a 2008 episode of This American Life dedicated to the financial crisis, “The Giant Pool of Money,” which was co-reported by Adam Davidson, AB’92.