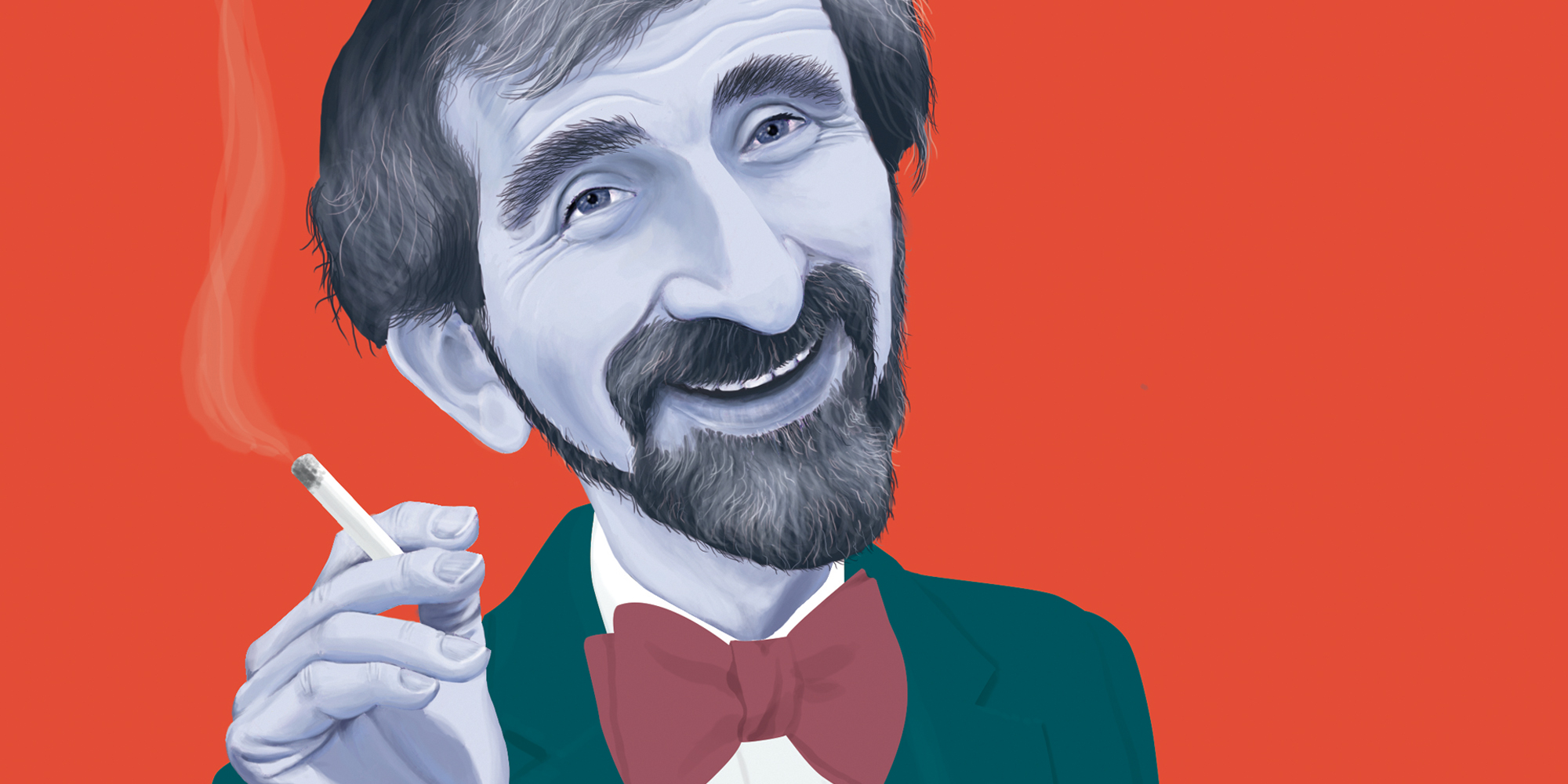 Max Stine waited in his office. These were not scheduled office hours, but he’d told the student to come at this time so they’d not be disturbed. He’d picked this time to conflict with the department meeting, excusing himself from the meeting because he had this appointment. The only part of his work he still enjoyed was the teaching. He recalled John Updike’s remark about “the agony of the working teacher.” Updike was speaking of his father, a high school teacher. There was no agony in Max’s teaching. His students were college kids, and none of them were forced into his classes. They chose to be there, usually because of the recommendations of older students. There was no agony in teaching them: it was closer to ecstasy. Max gave them everything he had—what he knew about the texts, what he knew about the problems of philosophy, what he knew about life in general and his own life in particular.

Yes, Max loved the teaching. The rest he’d like to be rid of, especially department meetings. He’d attended about a thousand, even chaired many. Departmental colleagues were decent and intelligent, but they talked and talked, and so did he. He was as guilty of this as anyone. His wife had pointed out that he was long-winded and she guessed that professors grow used to talking and talking to people who have to listen without interruption.

During meetings sometimes a colleague would complain about a university procedure, saying that things had been done better at his former university. When that happened, Max felt like saying, “If things were so good there, why did you leave to come here,” but he never did. It wouldn’t have been a fair remark; besides, although he accepted being the department’s old man, he didn’t want to be the crotchety old fart. He thought of his father, who wouldn’t have said “crotchety” but would have said “grouchy.” Max knew more words than his father had known, but he thought his father was the better man. His father had suffered slights, indignities, and hurts, but he didn’t dwell on them. His late father had been able to do what Max’s wife’s late mother had called “rising above it.” Max didn’t rise.

There was one member of the department who didn’t talk so much at meetings. He sometimes didn’t talk at all, and when he did, it was late in the conversation and he spoke briefly, almost always saying something genuinely useful. This young fellow was also an amateur magician. Max wondered whether the calm concentration required to do magic helped his colleague keep himself quiet when there was no reason to speak, and he wondered whether a philosophy professor’s resisting the temptation to oration was itself an exhibition of magic.

If lately Max talked less during department meetings, it was because he felt marginalized by the newcomers and because he was, finally, conscious of how much he might say that was unneeded. It’s especially important not to waste time talking or doing anything else when you’re growing old.

Max would have liked to have been smoking, but it was no longer permitted. First they stopped him from smoking in class, then he couldn’t smoke in any of the public spaces in the buildings, and now he couldn’t smoke even in his own office. One more unpleasant change.

Much had changed, he thought, as he contemplated Philip Waters’s behavior in class. Wherever he’d gone to high school, he was almost certainly one of those kids who was thought to be special, as Waters certainly thought of himself. His view, repeated over and over in class, was that the only reason why anyone ever did anything was because it pleased him and that was all the justification that could or needed to be given. He presented this view relentlessly, often beating down other students and remaining immune to anything they or Max might say in opposition. Waters had been like this since the first day of class. They’d begun with some discussion of David Hume’s moral theory, and this kid had immediately announced his view of the final truth in such matters, namely that there is no objective difference between right and wrong, and, further, that people, whatever they may say, always simply act in ways that will please them. A mixture of psychological and ethical egoism, Max thought, although he’d never encountered such a view in anyone as young as this student, this eighteen-year-old Philip Waters.

He’d known plenty of single-minded, self-confident types. How could he not, having spent so long with academics? When you argued against them, it was hopeless. If they were Marxists, they wrote you off as having an insufficiently raised class consciousness. If they were Freudians, they said you were repressing or in denial or something. And, of course, if they were ardent Christians—not common in academia but not unheard of—they could tell that you’d somehow not been touched by grace. And it was not that different when you dealt with someone who treated texts as scriptures—an ardent Kantian, say, who simply could not fathom your opinion that Kant is largely full of shit. But he’d never known anyone so single-minded and sure of himself at this age as Philip Waters.

The kid was a psychological egoist, Max thought, or an ethical egoist. He strained to remember the difference. Probably it was both psychological and ethical egoism. Max couldn’t remember just how those categories went. There were so many, dating back to graduate school. Universal egoism, teleology, deontology, externalism, internalism, realism, nominalism, logicism, intuitionism, and on and on. To what purpose? Lately Max had run through a mental inventory of those who had taught him philosophy, realizing with shock that nearly all of them had died. One who hadn’t died had once written, “Such ‘explanations’ are no doubt essential, and they may account for everything we need to know except why any man of intelligence has ever been attracted to the subject of philosophy.”

Yes, Max thought, and yet people continued to make these categories and stuff them. Max supposed it helped people see where they stood, although it had never helped him in the least.

And the books, the books treated like scripture. Years spent trying to figure out what the Kraut (as Max thought of him) meant by “Dasein.” Or the earlier Prussian with his transcendental rigmarole. When he’d been a student, the Germans were neglected or at best marginalized, but now they were roaring back. Even in his own field: Adorno, God help us, and Heidegger, who said we need a god and then became one for his epigones. Max supposed that it might have been wrong to ignore those German texts, but now they were back. The baby had returned, but so had the bathwater. Yeats’s lines came to mind—

And what rough beast, its hour come round at last, Slouches towards Bethlehem to be born?

—and Max thought the beast in question could be German philosophy. Sinking deeper into his rambling thought, he recalled lines from the Auden poem:

Accurate scholarship can
Unearth the whole offence
From Luther until now
That has driven a culture mad,
Find what occurred at Linz,
What huge imago made
A psychopathic god …

As Max began to emerge from his reflections, he thought of himself and how he’d avoided the isms and no longer slaved over the great books. He just wanted to be a philosopher, and maybe he was, although he wasn’t sure just who thought so.

Max pulled himself completely out of the reveries about his career, his father, department meetings, and the Germans, wondering whether he had an irrational fixation on the Germans. Fixation, maybe. But why irrational? At that he fell into another reflection as he remembered that much later in the day he would be visited by the graduate students who were assisting him in his class.

Earlier in his career he’d had many graduate students working with him, but no more. Now his clientele were mainly college kids, especially freshmen in the class in which Waters now annoyed him. Where had the graduate students gone? Maybe they were uninterested in his field, in his work. Maybe they were uninterested in him. He didn’t much care, although he enjoyed their company at department events. He did wonder what those graduate students thought when they were appointed his course assistants and saw his popular classes. Did they dislike his style and write his popularity off to something unphilosophical? Well, he didn’t much care what they thought, although he enjoyed their help and good humor. But what did Max care about?

And earlier in his career he had often been invited to lecture elsewhere. For a time, he had given more outside lectures than anyone else in the department, but those invitations had dwindled to a trickle. He was nearing the end of his career, and it seemed his sun was setting. He published less frequently, although regularly. Recently an essay of his had been translated into Slovak, joining earlier pieces of his that had been translated into Russian, Serbo-Croatian, and Polish, and now he was invited to give a keynote address in Bratislava. Well, he thought, maybe he was rising in the East.

The knock at the door was not tentative, although it wasn’t aggressive. As he rose to go to the door, he thought of the door-knocking in the Saul Bellow novel. This knocking was also “not so innocent,” although Max knew this kid was no Augie March.

Max opened the door and silently waved the student to a chair, then took his own seat behind the desk.

“I’m in your class, Professor Stine. My name is Philip Waters.”

“I’ve come to ask about my paper grade.”

Waters looked angry but also flustered, and he said, as calmly as he could, “But the paper deserves much better than that.”

“Then you’ll change the grade?”

“But why not,” asked Waters, “if you admit that it should have a better grade?”

Finally Max spoke at length. “I don’t see that there’s any ‘should’ to it, Mr. Waters. You’ve finally persuaded me that the only reason why anyone does anything is in order to further his own pleasure. It pleased me enormously to give you an F.”

“I don’t believe you, Professor Stine. I haven’t persuaded you of anything.”

“How do you know? In any case you can barely imagine how much I liked assigning that F.”

Waters’s anger now showed clearly, and he raised his voice. “I’ll go to the college ombudsman and the dean, and then you’ll be in real trouble.”

“What will you tell them, Mr. Waters?”

“I’ll show them the paper with your F on it, and they’ll read the paper and see that it’s worth much more than an F.”

Now Max smiled for the first time. “What if I tell them that I’ve never seen the paper before, that it’s not the paper you turned in?”

“Yes. In class you gave a forceful and sarcastic rebuttal of Kant’s argument against lying.”

Waters trembled and he stood up. As he walked out of the office, he said, “We’ll see.”

Excerpted from Serious Larks: The Philosophy of Ted Cohen, edited and with an introduction by Daniel Herwitz, PhD’84, University of Chicago Press, 2018. Cohen, a professor in philosophy and the College, began teaching at UChicago in 1967. He died in 2014.