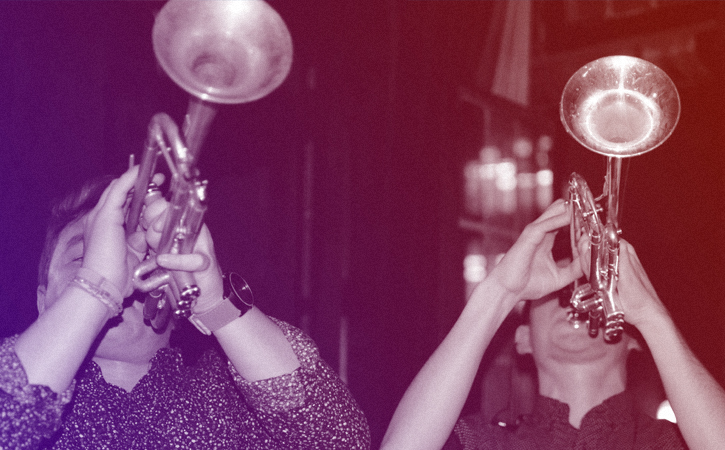 Getting down to brass tracks

If you want to get to know the Dirt Red Brass Band, you’ve got to have patience for stories––because the band’s got plenty. Sardine-packed Hyde Park apartments? River North speakeasies? Been there, done that. Then there are the raucous parties and the opening set for senator Bernie Sanders, AB’64.

In the fall of 2012, trumpeter Ivan Pyzow, AB’15, found himself exhausted by the intensity of UChicago’s on-campus musical ensembles––so he decided to pull a group of musicians together, play some New Orleans standards, and focus on improvising and having fun. They started inviting more and more people to the fledgling band. “That set the fire, and it just grew from there,” he says.

Pyzow “wanted a name that was reminiscent of New Orleans bands, names like Dirty Dozen and Rebirth, with a bit of edge to them,” so he settled on Dirt Red. “[It’s] a little bit tough,” he says––and nods to “the fact that we’re all Maroons.”

Nonetheless, as guitarist and fourth-year Jake Kleinbaum notes: “People always call it Red Dirt. My mom does that all the time.”

If not humble—even in its earliest days, the group outnumbered most college bands by a 2:1 ratio—Dirt Red’s beginnings were at least eclectic, with early gigs ranging from a Vincent House casino night to a crawfish boil booked through Craigslist.

But after five years in the business, the band has earned a reputation for high-energy performances on and off campus. A lot of that dynamism can be chalked up to Dirt Red’s sheer scale—the band’s Facebook page states that it comprises “three trumpets, two trombones, one euphonium, two alto saxes, one tenor sax, and one bari sax, one guitar, a crooner, one fiddle, half a keyboard, and 3/4 of a drum kit”— but plenty comes from its following on campus.

“A little bit more fun” usually means a lot of fun. Pyzow was approached by an audience member after one apartment gig and praised for creating “such a sound with only seven members.” Fourteen people had performed, Pyzow says, but the apartment was so crowded that the audience couldn’t keep track of them all.

Kleinbaum was once told by the cops, who shut down a show at alto saxophonist and fourth-year Gil Bao’s apartment, that they’d received five noise complaints within 10 minutes. “They didn’t have an address, didn’t know where the party was, but they could hear where it was from five blocks away with their windows closed,” he recalls.

As far as word-of-mouth goes, Dirt Red’s most famous moment might be the time they caused an apartment floor to collapse. Though no one was injured, the scare was enough to make the band swear off apartment shows (for about two months, at least). Though that commitment didn’t last, the song they were playing at the time, “Seven Nation Army,” has yet to make it on another set list––there’s just too much stomping.

“I think we still go in with the attitude of, ‘all right, we’ve got to go hard right away, because this might get shut down at any moment.’ Then it keeps going for three hours,” says trombonist and fourth-year Elijah Wolter.

Over the past few spring breaks, Dirt Red has taken this spirit to New Orleans, where they've jumped on jam sessions, busked to tourists, and “second-lined”—paraded—through Treme, a neighborhood famous for its brass bands. The accommodations aren’t luxurious (“‘hotel’ is a strong word” for the place they’ve stayed for the past several years, jokes Wolter), but the band keeps busy and works with Roots of Music, a tutoring organization cofounded by Derrick Tabb of Treme’s Rebirth Brass Band.

Dirt Red’s biggest gig took place back in Hyde Park this February, when a friend of the band who interned at the Institute of Politics invited them to open for an interview between Chris Matthews and Sanders at the Quadrangle Club.

An hour before showtime, the band decided to play “This Land Is Your Land”—a song that figured prominently in Sanders’s campaign, but which no one in the band knew. “So we learned [it] super quickly and played it as he walked in,” Kleinbaum recalls. “And then Chris Matthews calls us Red Dirt Brass Band.”