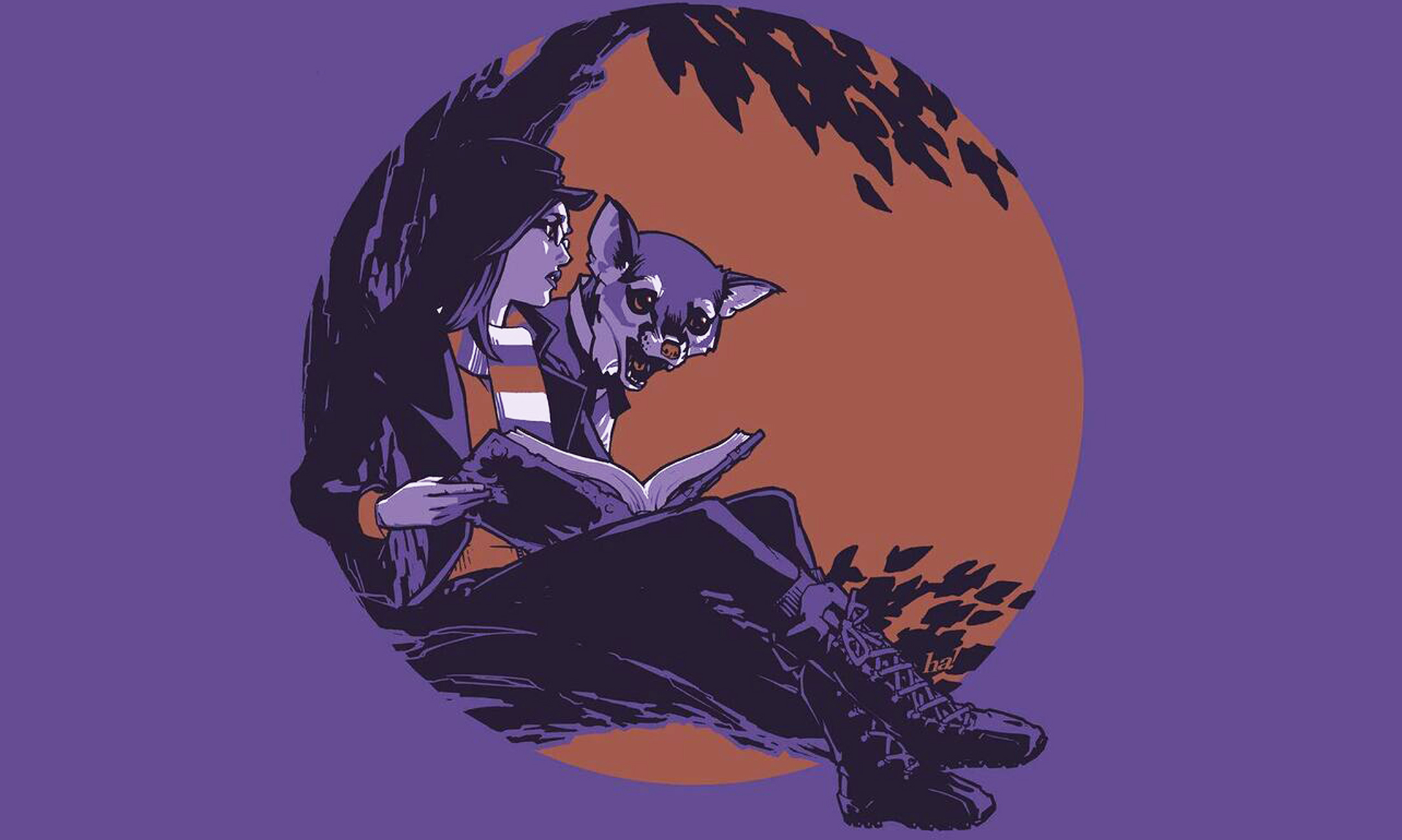 Malynne Sternstein, AB’87, AM’90, PhD’96, has long studied pop culture, but never expected to be creating it until she got an email in late 2014.

“The subject line was something like ‘Help me make up a language,’” says Sternstein, associate professor in Slavic languages and literatures. “It was very alluring.”

The sender was illustrator Gene Ha, who was in the process of writing his first comic book after earning acclaim as an illustrator.

While the story would be written in English, Ha was looking for someone who knew Czech to help name the fantasy kingdom where it would take place, as well as some of the locations and creatures within it.

The result of their work, Mae, came out earlier this year. Mae Fortell, the heroine, hasn’t seen her sister, Abbie, for eight years. It turns out Abbie has spent that time in a fantasy land called Cimrteren, and she returns to take Mae back with her to help fight monsters and other villains.

Sternstein talked about the collaboration, pop culture, and why Czech is a perfect language base for an invented world. The following conversation has been edited and condensed.

How did Gene Ha find you?

I think he sent a bunch of messages out to Czech professors, and there aren’t that many of us. Sort of a stab in the dark. He had had a native Czech speaker who was helping him with the very early pages of the project. It wasn’t that he wasn’t helpful, but that wasn’t what Gene wanted.

He sent me some of the things that his native Czech translators had worked on before. They were translating quite directly, and they weren’t thinking about the sounds—how to fracture the sounds and create some kind of compound monstrosity of a word. I started playing with that. No Czech is going to say, “Oh, that’s Czech.” But there’s enough there to say, “What’s going on here?” It’s that word with this one and a little bit of something else. That’s what I had in mind, and Gene seemed to like it.

It all happened over email. He’d just call on me when he needed something.

Like if someone was going to be cursing at someone.

Exactly. If the invaders were cursing someone out, I would be called on. He would just ask me for mainly nouns and proper names, and oaths.

It wasn’t until maybe the third time that I supplied him with some stuff, that I said, “You know, Czech is a highly inflective language. You have seven cases.”

He had given a little bit of context, like, “So there’s this snail-bear kind of thing that’s about to come in, and Mae wants to say this to him. What should he be called?” And I said, oh, wait, that’s the vocative case. He’d asked me for these things before, but he hadn’t said what context it’s in. How much does that matter? Does he want it to be Czech, or does he want it to be Czech-like? So I told him about that, and he didn’t really seem to mind. He was just like, “Oh, OK.”

I feel more like I’m constructing a language, but with the basic structure of Czech. I’ll give him several possibilities, and he’ll choose the one that sounds and looks right. He usually picks the most complex one, with the fewest vowels and the most diacritics. But I’ll also tell him, “this would literally translate into something like this.”

Ha said he chose Czech in part because it looks unfamiliar and kind of exotic. With all the languages you speak (Czech, Russian, Thai, English, French, and German, with some lessons in Japanese, Hungarian, Italian, and Spanish), do you agree?

Absolutely. I don’t think of Czech as an exotic language, but it is a very difficult language. It’s much harder than Russian. Czech also really has a very dark humor that’s built into the language.

For example, the story takes place in Cimrteren (Editor’s note: The approximate pronunciation is tsimmer-tare-ENNN.). Cimrman, he is sort of this fantastical man who’s also a total blunderer. But then, by some miracle, he solves every problem. It’s sort of a cherished character in Czech culture. I gave Gene a bunch of possibilities, and he knew the position of Cimrman. And the second part, “teren,” that’s from the English word “terrain.” This land that espouses that magical realism, the heroic fool who has no intention of being a hero.

You gave a Humanities Day Lecture about the Hostel movies. Do you feel like the divide, as such, between high and low culture still exists in academia?

It was absolutely there, but I think Maus changed everything. When I first started teaching here in 1996, I taught a section of Readings in World Lit, and Maus was one of my instructor’s choice books.

In some ways, there are things that can only be said and shown in graphic novels. That’s why Maus is so important. If there’s ever a lecture or talk about the Holocaust, the killing fields, you can’t get at that in language that is conventional.

Will you continue to work with Gene?

I really hope so. Mae is such a terrific character, and this has made me a hero to my 13-year-old daughter. What’s appealing, and I know how cliché it is, but Mae is just this really strong, badass girl.