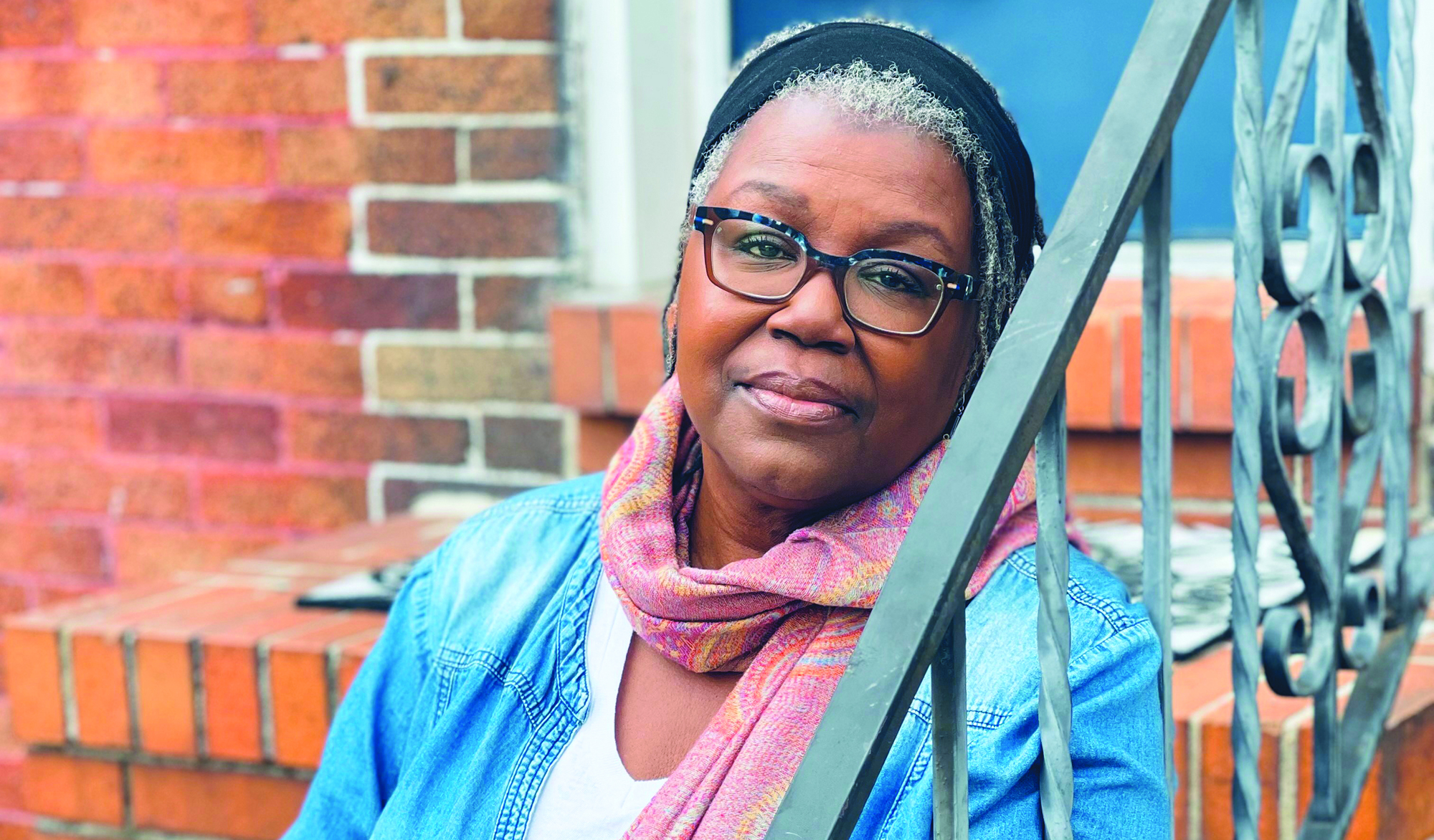 Writing Miss Chloe “was an exercise in grieving,” says A. J. Verdelle, AB’82. “I would write memories down and new memories would come.” (Photography by Asia Goffin)

A. J. Verdelle, AB’82, writes lovingly, but honestly, of her friend Toni Morrison.

A. J. Verdelle, AB’82, was in her late 20s, working as a statistician, when she first heard Toni Morrison speak. Morrison had just published her fifth novel, Beloved (Plume, 1987). Hundreds of people had crammed into a Boston church to hear her read.

During the Q&A, an aspiring writer, who had rushed to be first at the microphone, described her dissatisfaction with her own failed stories and asked for advice. Morrison’s tart response: “Well, it sounds like you don’t know what you’re doing.” The audience gasped; Verdelle, an aspiring writer herself, was mortified.

All the more astonishing, then, that Morrison—who could be “steely,” in Verdelle’s description—would become something like a fairy godmother to her. “My relationship with Morrison lasted a third of my life and was not wholly intimate and not fully professional,” Verdelle writes in Miss Chloe: A Memoir of a Literary Friendship with Toni Morrison (Amistad, 2022).

Eight years after the church incident, Verdelle had completed an MFA at Bard College and written a debut novel, The Good Negress (Algonquin, 1995). Before its release, the publisher sent out galleys of the book as a holiday gift. A friend of Morrison’s sent one on to her; she wrote back describing it as “truly extraordinary.” With that description on the cover—one of the few blurbs Morrison supplied in her long career—the success of the then unknown author’s novel was all but ensured.

In the summer of 1997, Morrison invited Verdelle to New York for what Verdelle assumed was a gathering. She was surprised to discover it was just the two of them, a private visit. Morrison was “warm, curious, and engaged, full of good humor and blunt questions.” They talked for two hours.

That fall Verdelle began teaching creative writing at Princeton, where Morrison taught. Morrison had set that in motion too.

At Princeton they became friends—though it was never a friendship of equals. Morrison was a generation older, a fact Verdelle acknowledged with the affectionate nickname “Miss Chloe.” Morrison was born Chloe Wofford; the honorific “Miss,” Verdelle writes, was “a statement of considered, cultivated, well-trained deference—to age, to wisdom, to significance.” Verdelle was the only one who called her that.

Miss Chloe began as a short piece Verdelle published in the New York Times after Morrison’s death in 2019: “Miss Chloe taught me more in short exchanges than I’d learned in years of school,” she wrote. An early draft of the book was structured as a series of lessons. But her editor urged Verdelle to include more information about herself: “You have the friendship that everybody else wished they could have.”

Born Angela Jones, Verdelle grew up in Washington, DC; she dropped “the plantation name,” she writes in Miss Chloe, and adopted her maternal grandmother’s maiden name at age 27. Under pressure from her parents to pursue a practical, nonartistic career, Verdelle studied political science at UChicago, did graduate work in the social sciences, and eventually established her own statistics consulting firm. “I can turn words into numbers and then turn numbers back into words,” Verdelle says. “That was how I sold it.”

With a job and a steady income, Verdelle allowed herself to dream. She began by studying the “creativity literature,” she says, including If You Want to Write (G. P. Putnam’s Sons, 1938) by Brenda Ueland and Flow (Harper & Row, 1990) by Mihaly Csikszentmihalyi, AB’60, PhD’65. She read and reread books she loved—analyzing, counting scenes, trying to pick apart how good writing worked. “It was a beautiful time,” she says.

Her debut novel, about the struggles of a young girl who is raised to cook, clean house, and set her own dreams aside, was written with the working title “Trash.” (“The working title is like a coat hook,” Verdelle tells her writing students. “You just use it.”) The UK edition is titled This Rain Coming, which Verdelle’s agent loved but could never remember: “I know it’s This Rain Something.” While mulling over alternatives, “the phrase ‘a good little negress’ just rolled off my tongue,” Verdelle writes in Miss Chloe. “The words seemed like the title, and a gift.”

A finalist for the PEN/Faulkner Award and other literary prizes, The Good Negress was well and widely reviewed: “I’ve never used the word genius in a book review before,” one began. Verdelle, who retains a fascination with numbers, tracked the reviews in a spreadsheet until she hit 150, which she considered a satisfyingly round number.

Meanwhile she had begun a novel about Black cowboys, inspired by her grandfather’s stories of working as a stevedore in Texas. She sold it, unfinished, to a publisher; it remains unpublished.

As Verdelle describes in dispiriting detail in Miss Chloe, the project—which has had several working titles, including “The Peter Cotton Tales” and “Meanwhile, Back at the Ranch” (Morrison’s favorite)—was derailed again and again in the publishing process. Verdelle prepared three separate complete revisions, each taking three years. It was this lack of progress that finally led to a rift with Morrison, who told her bluntly, “You don’t need an agent. You need a lawyer.” Ten years later, Verdelle says, she is working on one final revision—and is ready to take Morrison’s advice.

Verdelle has two other works in progress: a collection of essays on the duality of Black existence, “being marginalized and being central at the same time,” and a writing craft book, “Punch and Beauty,” that systematizes revision. Powerful writing, Verdelle says, “has both punch and beauty.”

She left Princeton after six years, having realized “the best use of my energy would be teaching Joneses, Johnsons, Smiths, Washingtons,” Verdelle writes in Miss Chloe. She teaches in the MFA program at Lesley University and coordinates the creative writing program at Morgan State University, a historically Black institution in Baltimore. (Among her reviews on RateMyProfessor.com: “She’s a fabulous teacher. … I love seeing her around campus and giving her a hug!”) Verdelle encourages her students to experiment with writing longhand, as she does: “I value that connection. Brain to hand,” she says.

When she began Miss Chloe, she wasn’t sure she had much to say, so her editor asked for 20 pages. She wrote 100 in six weeks. Published just three years after Morrison died, the book shimmers with beautifully crafted passages, clearly revised and revised again. “I trust that you understand that Toni Morrison was a genius,” Verdelle says. When writing about Toni Morrison, therefore, you have to “write with all you have.”

Read more from Verdelle and an excerpt from Miss Chloe.