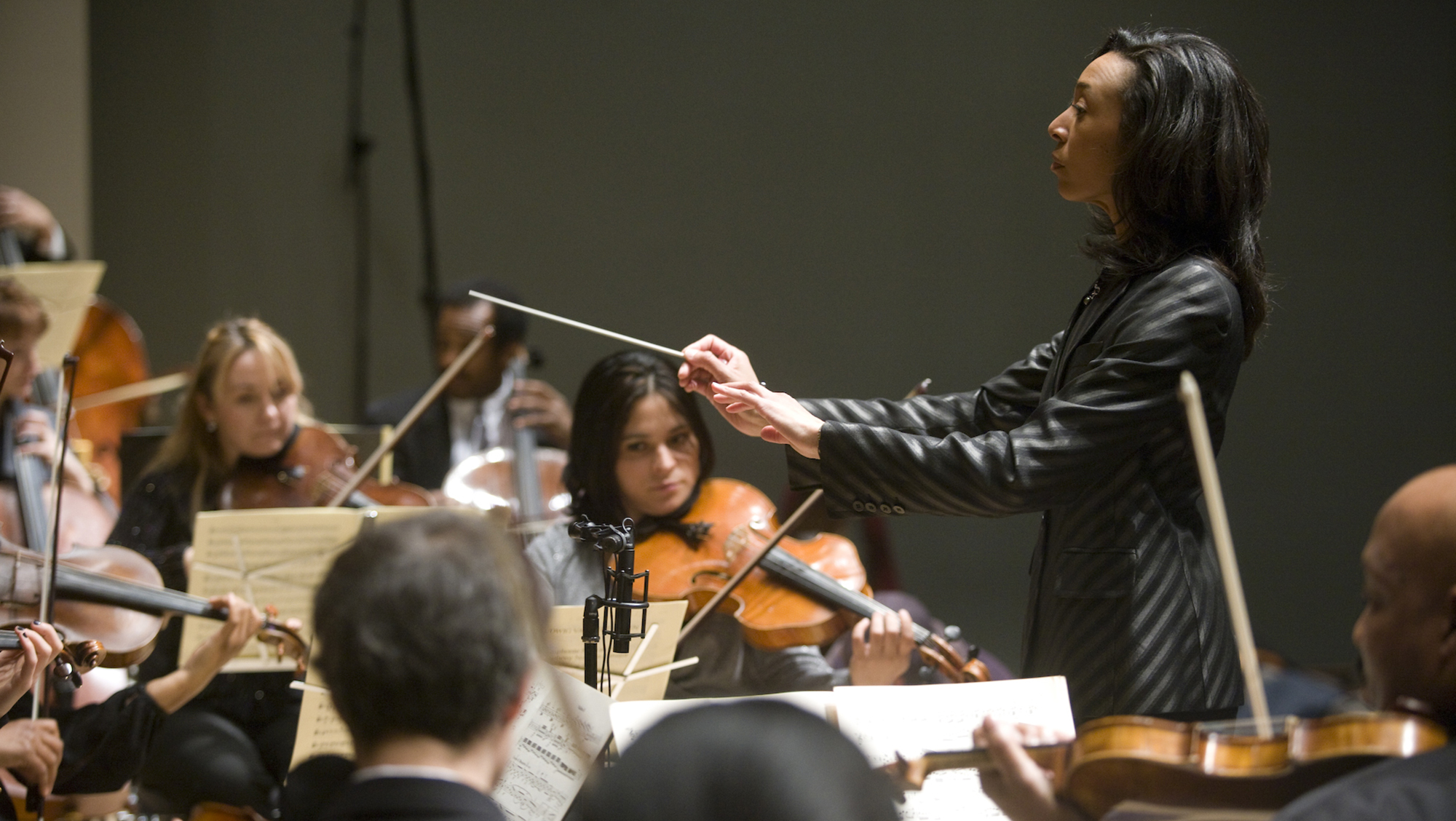 Jeri Lynne Johnson, AM’05, has spent her career trying to increase the diversity of classical music ensembles and audiences. (Photography by EA Kennedy III)

By
Author
Maureen Searcy
|
The University of Chicago Magazine
—
Winter/22

Jeri Lynne Johnson, AM’05, a pianist and conductor who studied music history and theory at UChicago, is no stranger to rejection—that’s just the life of a musician. But it’s rare to receive feedback on why you were passed over, so when Johnson was offered an assessment of her audition for an orchestra conductor position, she welcomed the opportunity. “The gentleman was quite complimentary about my work,” says Johnson, but told her that, as a young African American woman, she wasn’t what the audience expected. “He said I didn’t look like the maestro.”

Johnson had mixed feelings: shock to hear those words, gratitude for the honesty, and “simmering rage at the system.” Two years later, in 2008, she founded the Philadelphia-based Black Pearl Chamber Orchestra—“a group of highly trained people of different ethnicities, gender identities, sexual orientations, and races”—as a way to temper that anger. She wanted to address real and perceived barriers to the performance and enjoyment of classical music while creating a model for 21st-century orchestras that play classical music by and for everyone.

The orchestra’s name refers to the precious gem and how it’s made—by a living organism protecting itself. A grain of sand inside an oyster gets coated in layers of mother-of-pearl, easing discomfort for the mollusk while creating something beautiful. “The orchestra,” says Johnson, “is a vehicle for transforming grit into grace.”

To achieve her vision for Black Pearl, Johnson needed an ensemble that was exceptionally skilled and intentionally diverse. Fortunately, she had four indispensable resources nearby: Juilliard, the Manhattan School of Music, the Curtis Institute of Music, and the Peabody Institute of Johns Hopkins University. By recruiting an inclusive group of musicians from top institutions, she sought to combat one of the most pernicious biases in classical music—“the perception of the inverse relationship between diversity and artistic quality.” The orchestra has developed a reputation for artistic excellence, earning multiple National Endowment for the Arts grants.

Johnson has earned her own accolades: in 2005 she became the first African American woman to win an international conducting prize when she was awarded the Taki Alsop Conducting Fellowship, founded by Marin Alsop, the first woman to lead a major American orchestra. Johnson now collaborates with orchestras and operas around the world, often as the first African American woman on the podium for the ensemble. (Her upcoming guest conducting engagements include, among many, the National Symphony Orchestra, Florida Grand Opera, São Paulo Municipal Symphony, and the Santa Fe Opera.)

Black Pearl’s mission reaches beyond performing concerts. From the beginning, part of its work has been community outreach—or, to use Johnson’s preferred term, “inreach.” The notion of the orchestra reaching out into the community assumes an insider-outsider relationship, but she wanted a reciprocal partnership. Black Pearl’s programs offer hands-on opportunities to interact with the music, with the goal of converting the orchestra from “a gatekeeper of an artistic product into a facilitator of the creative process.”

For instance, the popular event iConduct! gives Philadelphians a chance to get a conducting lesson from Johnson and lead the orchestra themselves. The idea traces back to when Johnson was told she didn’t look the part of an orchestra conductor. “I’m going to make everyone into a conductor!” she resolved. During the event’s first iteration, audience members tried their hands at leading a performance of Beethoven’s Symphony no. 5.

Black Pearl has also held an orchestra fantasy camp, where talented amateurs rehearsed side by side with professionals, culminating in a performance of Beethoven’s Symphony no. 9 with Opera Philadelphia, who had similarly paired amateurs with seasoned singers. “The goal is not perfection of the art,” says Johnson. “The perfection of the art is in service of creating community.” These engagement programs have made Black Pearl the only US organization to earn three Knight Foundation Arts Challenge grants.

In 2016 Johnson established DEI Arts Consulting. The firm is separate from Black Pearl, but its mission is related. Early on the diversity, equity, and inclusion consulting firm focused on classical music audience development: how to attract younger and more racially and ethnically diverse listeners.

Then in the spring of 2020, the murder of George Floyd launched a “reckoning with systemic racial injustice in America,” says Johnson, and many more institutions started interrogating their own cultures and practices. With public performances canceled during the pandemic, Johnson was able to devote more time to her firm and branch out beyond music to other arts, cultural, and educational organizations intent on making themselves more inclusive and equitable.

When Johnson engages with a new client, the first step is to help them understand who benefits and who loses in systems of exclusion, “without any moral judgment.” Then each organization can begin to challenge its assumptions and consider how to change. “Where we excel as consultants and advisers is not as subject matter experts necessarily,” says Johnson, but in “our ability to be comfortable with discomfort.”

Yet as a working artist in a field that continues to grapple with DEI issues, Johnson is a subject matter expert. And Black Pearl gives her a “working lab for all of my ideas around diversity and innovation and engagement.” Over the past 12 years, Johnson has collected data from the orchestra to support her work as a consultant.

Johnson’s activism—via the orchestra and consulting—is in service to her vision of classical music’s potential: to reflect and embrace “the diversity of the communities we seek to serve.” On one level, “we’re just an orchestra, performing music”—Mozart or Stravinsky or more contemporary composers like William Grant Still or Jessie Montgomery. But when patrons attend a Black Pearl performance, some may see themselves represented for the first time.

Johnson takes inspiration from a quote by composer Gustav Mahler: “A symphony must be like the world. It must contain everything.” For her, Black Pearl must contain everyone. It is “not just a musical ensemble. It’s a worldview.”