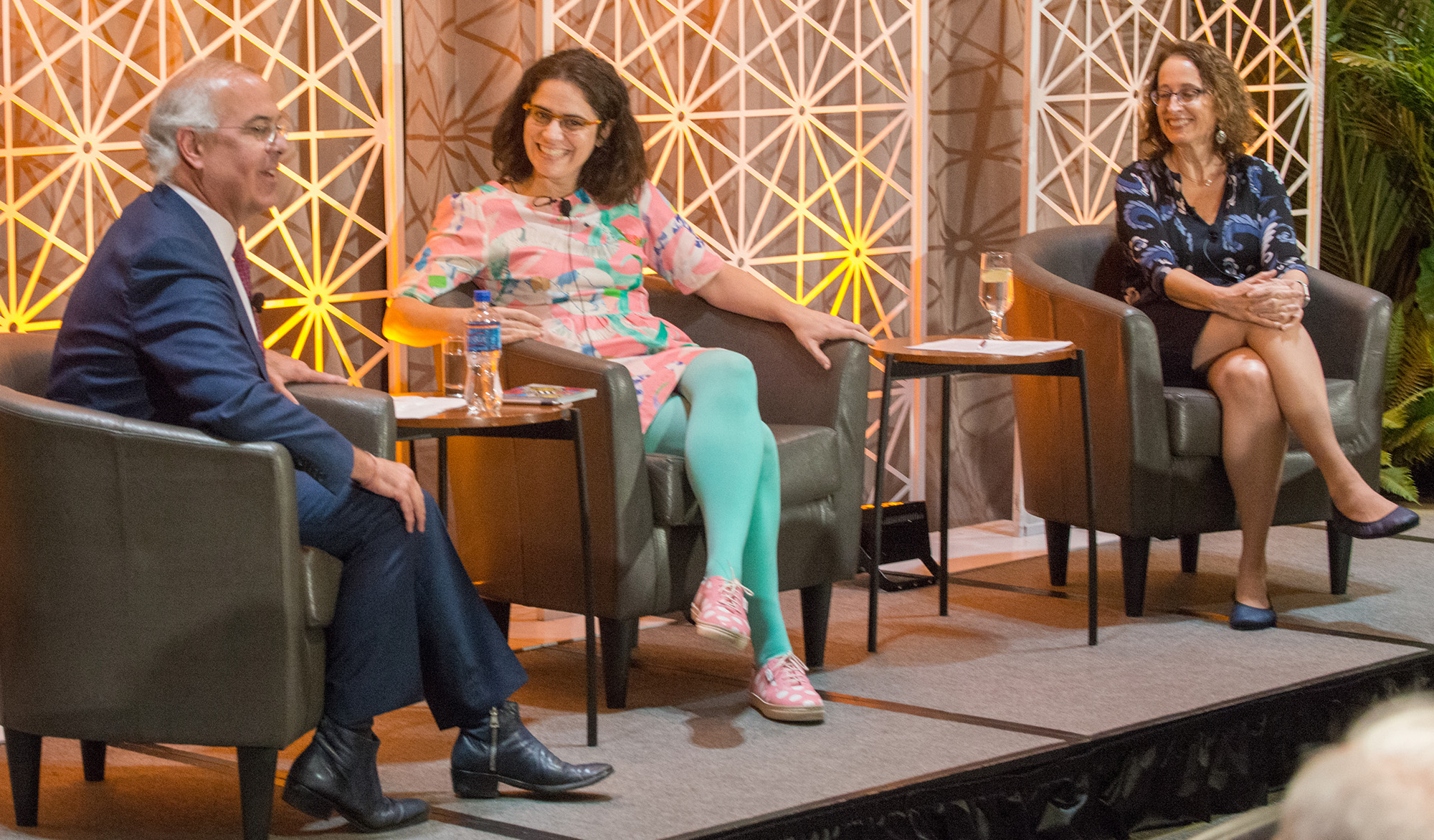 David Brooks, AB’83; Agnes Callard, AB’97; and Ayelet Fishbach at A Meeting of the Minds: Business and the Human on October 15, 2019. (Photography by Joe Sterbenc)

A philosopher and a psychologist walk into a panel

David Brooks, AB’83, kicked off a Gleacher Center event in October by waxing nostalgic about his alma mater. At the University of Chicago, he recalled, great texts were treated “as if the keys to the kingdom, the keys to the secret of life, were found in these books if you read them well and studied them. And once you’ve tasted that wine, you can’t go back to Diet Coke.”

The purpose of the evening was to dedicate this kind of serious scholarly consideration to a pragmatic and perennial question: How do you become the person you’d like to be?

The second installment of A Meeting of the Minds: Business and the Human—an event series sponsored by the University of Chicago Booth School of Business and the Stevanovich Institute on the Formation of Knowledge—the panel discussion brought together the perspectives of Chicago Booth’s Ayelet Fishbach, who is a psychologist by training, and associate professor of philosophy Agnes Callard, AB’97. Their conversation was moderated by Brooks, a New York Times op-ed columnist and UChicago trustee.

There is no shortage of advice about how to live. While Brooks conceded that giving advice is how he makes a living, both panelists were skeptical about the benefits of being told what to do. “I’m a philosopher and the first thing I do is make a bunch of distinctions,” Callard said, before distinguishing between counsel from a trusted friend, which may be valuable, and ready-made advice from a stranger, which generally is not.

Fishbach, the Jeffrey Breakenridge Keller Professor of Behavioral Science and Marketing at Chicago Booth, staked out her disciplinary territory: “Agnes, as a philosopher, started with distinctions. I start with data.” She cited experiments suggesting that giving advice is actually more beneficial than receiving it: one study showed that middle school students struggling with homework improved more if asked to give advice to peers than if provided advice by experimenters, and similar results have been found in adults struggling with unemployment.

Methodological differences became a theme of the evening. According to Callard, whose book Aspiration: The Agency of Becoming (Oxford University Press) was published in 2018, individuals are responsible for becoming who they are through a process of bringing new values into view and aspiring to live according them. If this is right, individual agency plays a crucial role in projects of self-transformation.

This all sounded a bit subjective to Fishbach, who prefers to view human growth through the lens of environmental influence: “I have many years of practice explaining people’s behavior without using their personality,” she said to Callard. “I would like to encourage you to just try it for a while. It really opens your mind. Just think about interventions for others and for yourself that help you grow.”

For his part, Brooks construed personal growth more as surrender than aspiration. “Most people have had gone through some valley in their lives, which they say is the transformational moment,” he said. “You get to a point where you soften some of the thick soil, the crusty soil you’ve built on top of yourself through life. And so it feels more like going deeper into yourself rather than a shifting from being one thing to another thing.”