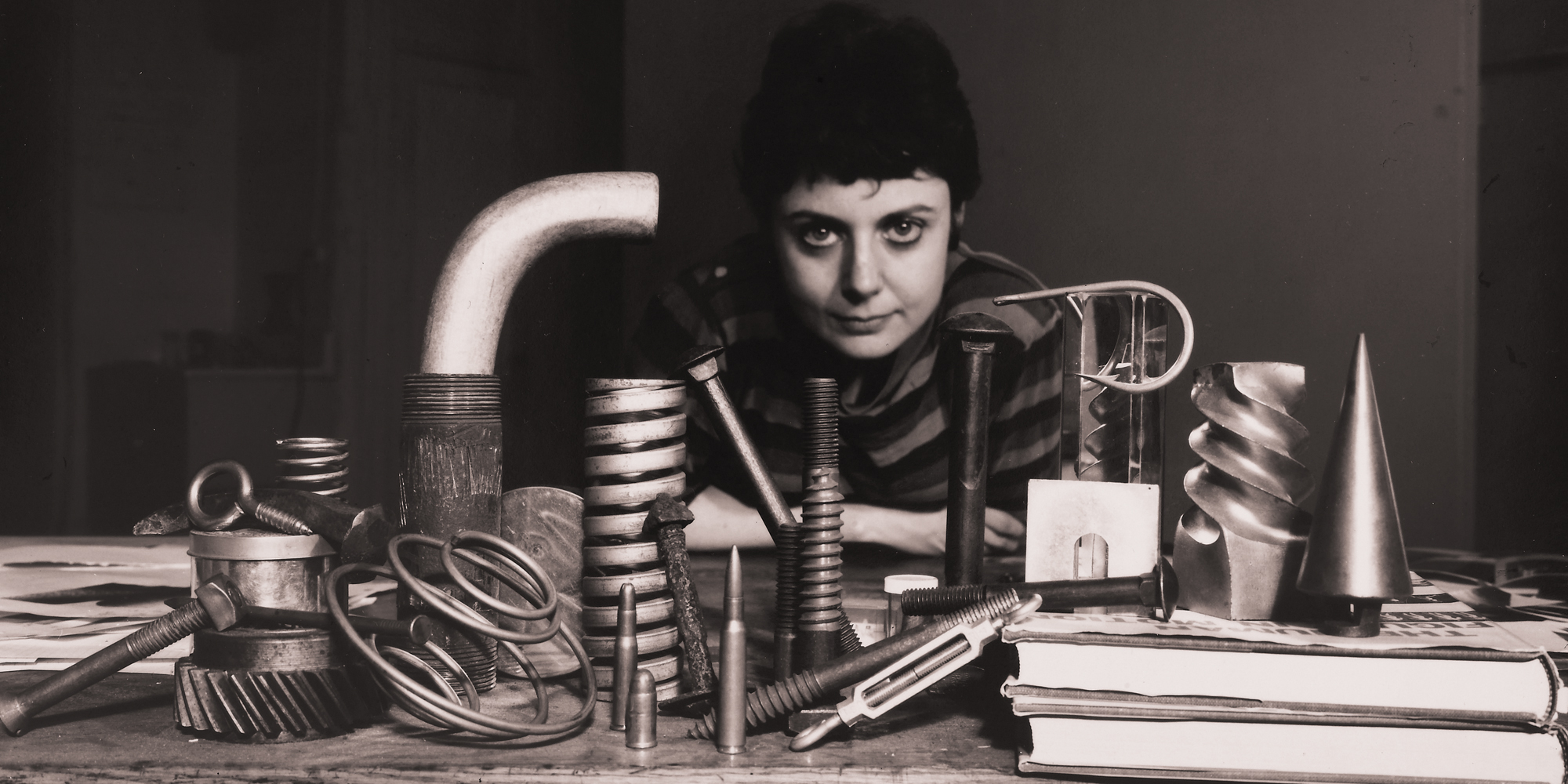 The most notorious conceptual work by artist Lee Lozano, AB’51, has no formal title. “DECIDE TO BOYCOTT WOMEN,” she wrote in a small spiral-bound memo pad in 1971. Lozano documented her conceptual pieces in a collection of cheap notebooks; her “write-ups,” as she called them, were handwritten in ballpoint pen using all caps. She considered them drawings.

The boycott was “AN EXPERIMENT,” intended to last a month or so; afterward, she hoped, “COMMUNICATION WILL BE BETTER THAN EVER.” But for unknown reasons, Lozano did not speak to women—with few exceptions—for the rest of her life.

Lenore Knaster was born in 1930 in Newark, New Jersey. At 14 she began calling herself Lee, part of a “REJECTION OF TRADITIONAL AMERICAN MIDDLECLASS FEMALE TRIP,” she wrote. She enrolled at UChicago in 1948, receiving a bachelor’s degree in 1951.

In the mid-1950s, she married architect Adrian Lozano and began studying painting at the School of the Art Institute of Chicago. An early admirer was Queen Elizabeth II, who, on a visit to Chicago, paused to look at Lozano’s painting Seated Figure in a student show.

Lozano earned her BFA in 1960 and, funded by a travel grant from the Art Institute, left for Europe with her husband. During the trip their marriage unraveled. Afterward she moved alone to New York, eventually landing in a sixth-floor loft in SoHo, back then an industrial area where rent was cheap.

Her early paintings juxtaposed tools—C-clamps were a favorite—with body parts, vulgar language, and crude lettering. (A curator at the Whitney Museum of American Art once referred to these paintings as “comix.”) Phalluses were a recurrent theme; Lozano saw creativity as male energy.

By the mid-1960s she had dispensed with text, creating enormous multipanel paintings of screws and drill bits. Her first solo show opened at the Bianchini Gallery in 1966 on her 36th birthday. Artforum praised the complex colors and skillful brushwork: “Miss Lozano is to be congratulated in the unity and strength of her show.”

Even as her career flourished, Lozano felt increasingly disillusioned with the art world and began creating noncommercial “Life-Art” pieces. Some she carried out, some remained ideas in her notebooks; others seem to have been designated as art pieces after the fact. Throwing Up Piece proposed tossing 12 consecutive months of Artforum issues into the air. The I Ching or Book of Change Piece required Lozano to rely on the book to make decisions. Dialogue Piece was a series of one-on-one conversations—mostly with artists and curators, though she also documented a failed dialogue with a cat.

In 1970 she proposed dropping out of the art world as a work of art: “DROPOUT (NOTE PUN) PIECE,” she wrote, calling it “THE HARDEST WORK I HAVE EVER DONE.” Despite the past tense, she hadn’t started. She still had two paintings to complete—96 Wave and 192 Wave—for a solo show at the Whitney.

Lozano’s first show at a major museum came at an awkward moment: the newly minted feminist movement was criticizing the Whitney for ignoring women artists. Yet the Whitney held up Lozano—who wrote “I AM NOT A FEMINIST” in her notebook alongside plans for the Wave Series—as an example of its commitment to showing women.

Lozano had the gallery walls painted black; each Wave Series painting was lit with a spotlight. In a separate room she presented collections of her body hair and nail parings. This time Artforum panned the show as an “intense, private trip” for the artist that did not “transfer to the viewer.”

The breaking point for Lozano seems to have been a tense meeting of a women’s subcommittee of the Art Workers’ Coalition, a leftist art group. The discussion infuriated her: “SAME JIBBERJABBER … AS IN JUNIORHIGHSCHOOL,” she wrote. Her eventual boycott of women specified the requirement to “THROW LUCY LIPPARD’S 2ND LETTER ON DEFUNCT PILE, UNANSWERED.” (Lippard, an art critic and activist, had hosted the meeting in her loft.)

Boycotting women was “a radical gesture that must have been incredibly painful and difficult for her,” says Christine Mehring, the Mary L. Block Professor of Art History. Lozano’s actions were “unusual, dramatic, problematic,” art historian Jo Applin wrote in her 2018 monograph Lee Lozano: Not Working (Yale University Press), “but also, in a way, very much of their time”—an era characterized by strikes, boycotts, dropping out. Also typical: rejecting feminism and the label “woman artist” to avoid further marginalization.

In 1971 Lozano clarified the intentions of Dropout Piece: “I WILL NOT SEEK FAME, PUBLICITY OR SUCKCESS.” Her process of dropping out was slow but inexorable. She had a final show, Infofiction II—consisting of a box of sand on the floor—at a London gallery in 1972. Lozano brushed neat rows of lines in the sand, evocative of the texture of her Wave Series paintings; visitors were invited to make marks and join in dialogue with the artist. For a week she waited in the gallery. No one did.

Afterward Lozano edited her notebooks, scratching out words, adding others. She renamed herself “Lee Free,” then “E.” By 1983 she was living with her elderly parents in Dallas. Their relationship was fraught; at one point her father took out a restraining order.

Lozano tried to drop out, but the art world would not let her—not even critic Lucy Lippard, called out by name in her boycott piece. “In terms of actual conceptual art, the major female figure in New York in the 1960s was Lee Lozano,” Lippard wrote in an early book on the genre.

By the late 1990s, Lozano was discovered by a new generation of curators and art historians interested in women and others who had been “written out of art history,” says Mehring. In 1998 Lozano’s work was shown at the influential Wadsworth Atheneum Museum of Art in Connecticut, as well as at three galleries in New York. The same year, Lozano created her final piece, Questionnaire, with Jokes, Concerning Purchases & Purchasers of My Art, which asked for her buyers’ age, sexuality, ethnicity, religion, and other personal information.

Lozano died of cervical cancer in 1999 and was buried, according to her instructions, in an unmarked grave. Since then she has been the subject of a number of scholarly monographs—most written by women.